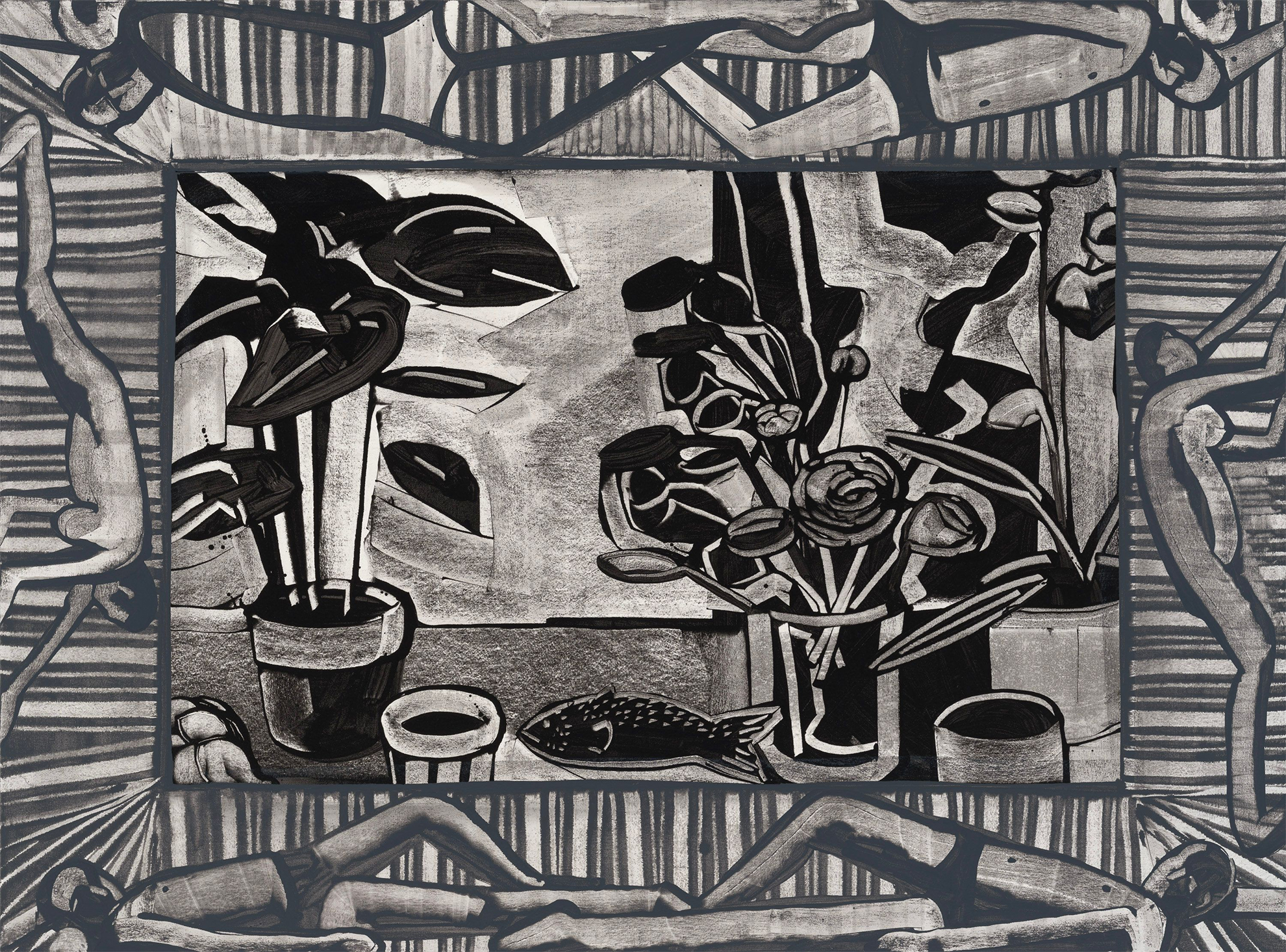 When planning her show of paintings, sculptures, and videos at the Galveston Arts Center (Jan. 14-April 16, 2023), Joey Fauerso decided to consider the large, high-ceilinged main gallery as the site of a single installation. “When I get the chance to work in a really big space, I like to think of it as one piece,” she said.

The centerpiece of the exhibition is two long linear paintings that begin on the walls and end on the floor. The artist is interested in an expanded definition of painting, so steel armatures are incorporated into these paintings, which interact with other elements in the show. These narrow bars serve as framing devices to focus attention on various aspects of the total installation.

In the paintings Flotation Devices and Silent Witness, the frames are as important as the central imagery. Four alligators occupy the frame in Flotation Devices, while in the middle, four female nudes float passively in water. According to Fauerso, the reptiles represent the uncertainty and anxiety we have been experiencing, including a worldwide pandemic, threat of climate change, war, legislation restricting women’s rights, and ongoing political upheaval. The women, on the other hand, appear serene and meditative.

“Framing is something I have been thinking about a lot in both the paintings and the videos,” Fauerso said. “I like the way a frame creates both a physical and psychological space to absorb the work, and how the frame can, in some cases, become the central subject of the work.”

In Silent Witness, the moon rising over the sea is calming, while four nude women crawling around the frame project a mood of unease. They appear to be attempting to escape from the painting’s physical confines, much as one might seek escape from things they can’t control.

According to Fauerso, the location of Galveston on the Gulf of Mexico inspired her to incorporate elements of water into the show. The show’s title, I Wish I Had A River, is from a Joni Mitchell song expressing her desire to escape on a frozen river:

It’s coming on Christmas
They’re cutting down trees
They’re putting up reindeer
And singing songs of joy and peace
Oh, I wish I had a river I could skate away on

Fauerso’s work is both political and personal, often focusing on her family and incorporating elements of domestic life, including her two young sons who have appeared in her videos. “I’m trying to present a different way to experience domesticity and motherhood,” she said. The show includes a series of videos titled Drawing Battles that were created when Fauerso attended the Drawing Center’s Open Sessions residency program in New York (2014-2015). They explore interpersonal dynamics through a series of live-action collaborative drawings done by Fauerso’s family and friends. “The sound of the videos playing in the gallery creates a layered experience that hopefully will activate the paintings,” she said. 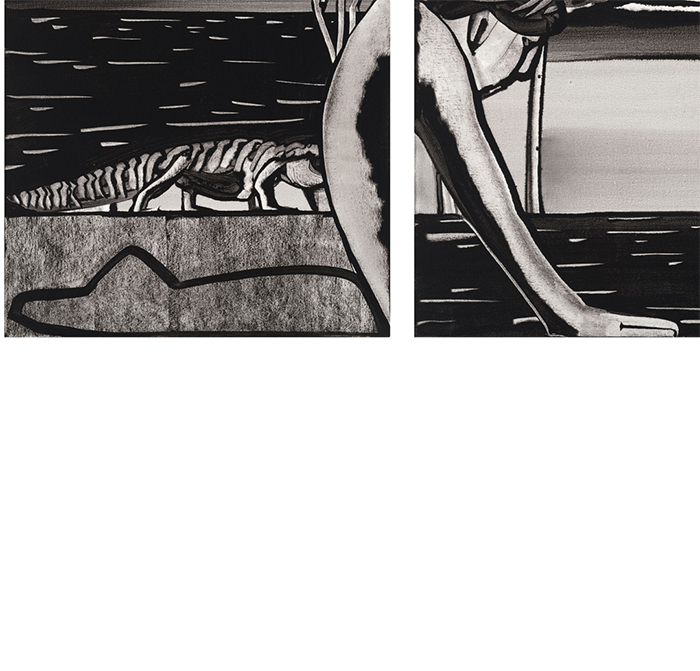 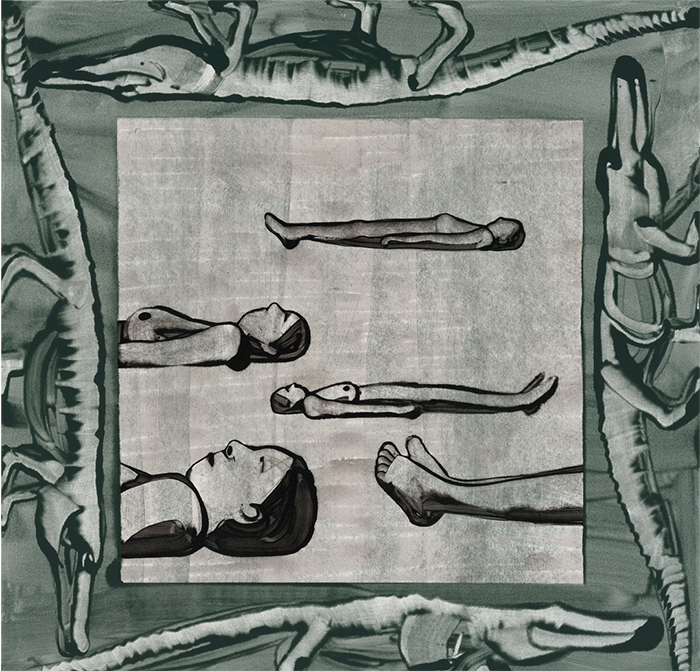 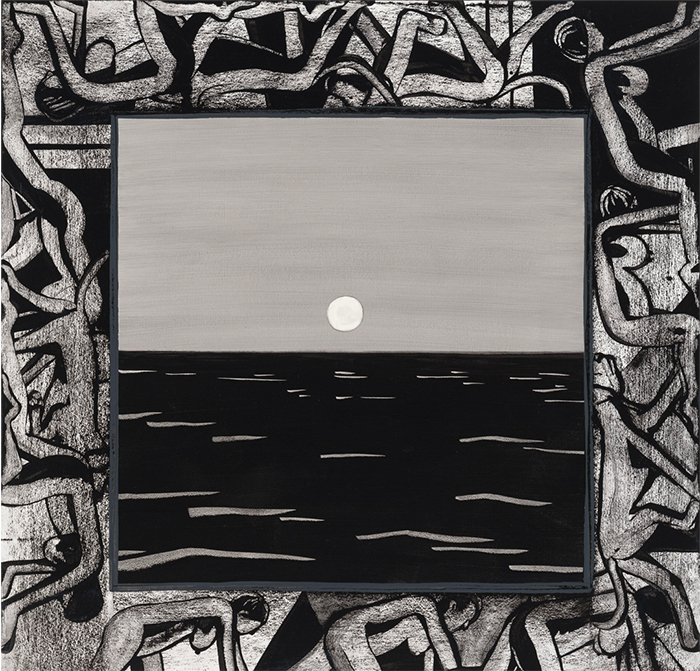 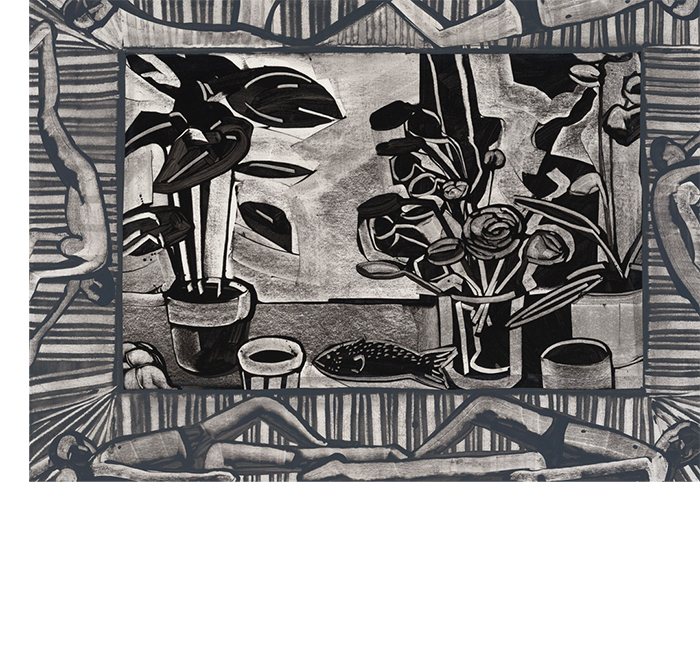 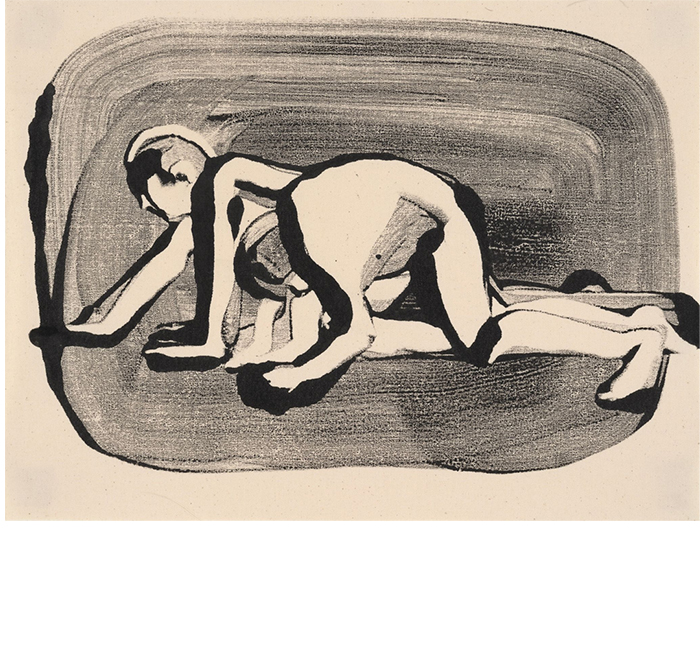 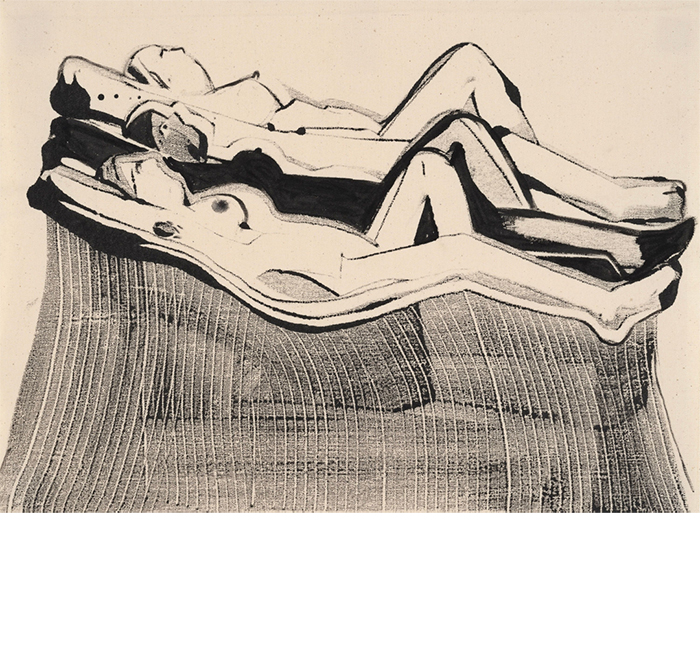 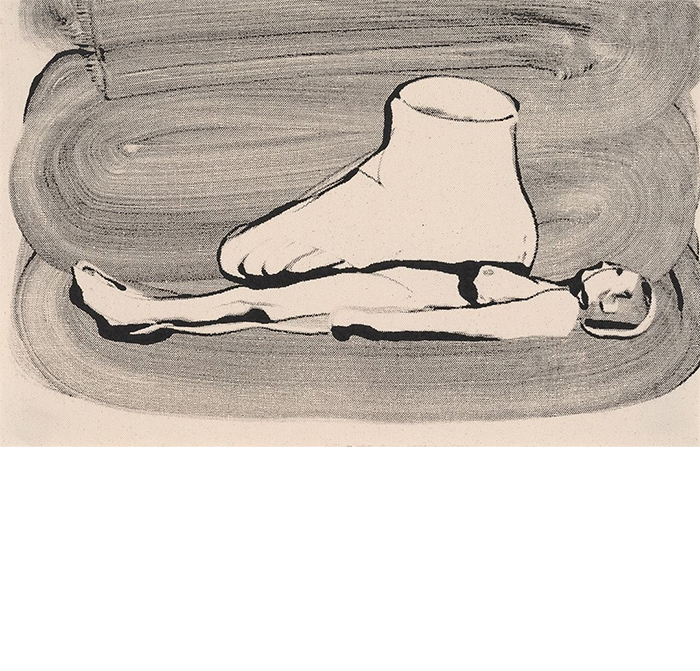 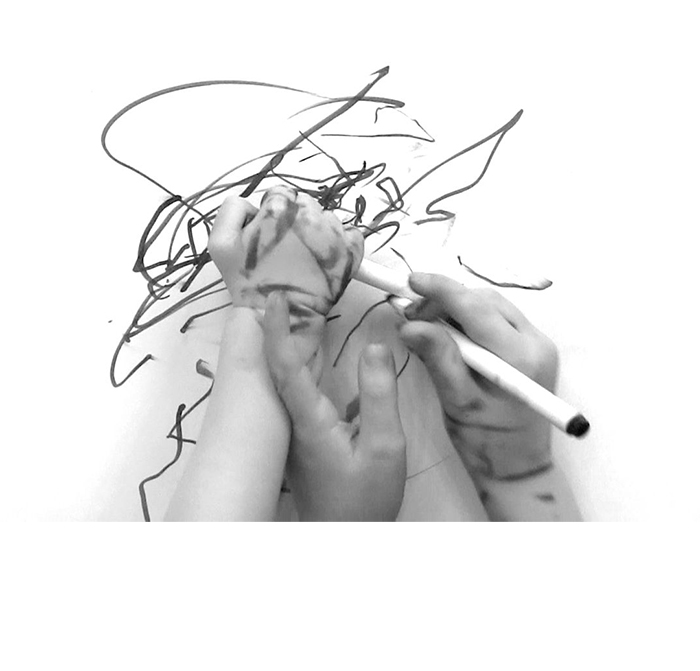 Fauerso has been studying social feminist Iris Marion Young (1946-2006), who examined human oppression and classified it into five areas—exploitation, marginalization, powerlessness, cultural imperialism, and violence. Some of the paintings include images that reference classic magic tricks in which a woman is sawed in half. Fauerso explored this somewhat violent subject matter to examine more closely how women’s bodies are presented in both art and society. Her female figures often serve as metaphors for women’s lack of power and their exploitation in a patriarchal system.

Fauerso gave up oil painting in 2014 after she received a diagnosis of breast cancer. She began experimenting with acrylic media, allowing chance and surprise to take more of a role in her work. This resulted in a subtractive method of executing primarily monochromatic painting. She works on the floor, applying paint to the surfaces and then scraping it off with kitchen spatulas, squeegees, and other tools. “My brain has gotten used to working in reverse,” she said. The physicality of the work is important to her, and she thinks of the paintings as two-dimensional carvings that are reductive in nature.

Fauerso groups disparate objects and images loosely related to a single theme and then proceeds to create meaning through their relationships. “Many pieces start with a kind of open-ended uncertainty that affords more space for surprise and discovery,” she said. “I then use these collections as material to build a narrative or experience that relies on chance relationships between pieces or patterns and currents that reveal themselves only when they are examined as a group.”

In Flexible Living, Fauerso riffs on the still-life genre; the center of the painting contains several plants and pots, a fish, and a rabbit, all painted in her distinctively stylized manner. The wide frame holds two crawling nude women and four men reclining in bathing suits. The figures are sculptural and appear to have been carved from stone.

Fauerso often frames the domestic stability of her still life with contrasting male and female figures. During the pandemic, the world became chaotic and unstable. “Uncertainty, precarity, and isolation are at the center of the human condition,” she said recently. In this show, Fauerso counters the desire to escape circumstances beyond our control with an installation that embraces this chaos with humor, insight, and intelligence.