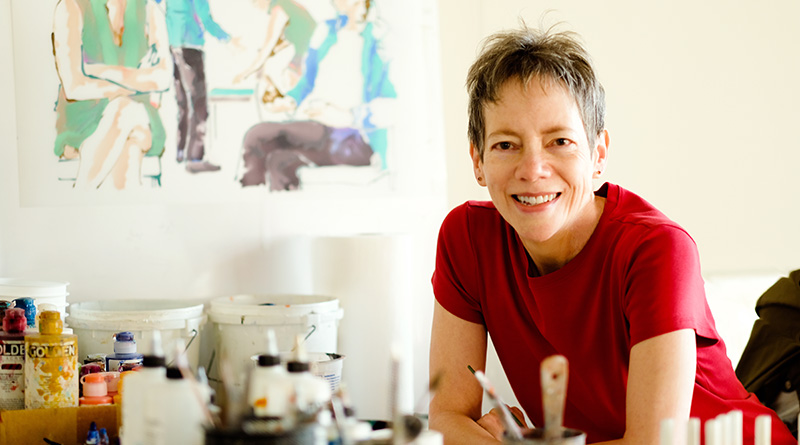 Lillian Warren thinks certain events in life are overemphasized, in particular, “big goals and career choices,” the kind of striving that defines so many American lives.   Standing in her roomy studio, surrounded by her highly-designed paintings of life’s most ambiguous moments, those spent in doctor’s waiting rooms or airports, she clarifies: “Your most poignant moments are probably over eggs at breakfast.” Resisting the polished narratives of social-media and the obsession with self-presentation, she says, “We stage and perform our lives.”

It’s a false—or at least incomplete—way of experiencing the world that Warren seeks to overturn through her paintings using self-deprecating humor and “gentle protest.” Her newest series of artworks, They Woke Up and Started Dreaming at Anya Tish Gallery May 19 through June 23, edge into the unexpected territory of the graphic novel and animation, a realm not traditionally associated with subtlety.  But a common undercurrent remains in all of Warren’s work, finding “unexpected and unusual beauty” in what others deem unimportant or ignorable. “Most people don’t take time to look,” she says.

The paintings have evolved since her early BFA days at the University of Tennessee, where Warren was an abstractionist “because that’s what you did at the time,” to landscapes and “traffic-scapes,” anything that represented the right “collision of accidental factors.” Recently she has migrated to figural work, and even narrative. In her newest works, text has begun to invade the frame. Whatever her subject, the paintings have remained multivalent. “It’s an extension of my own personal gratitude practice and mindfulness practice,” she states, a way of looking at the world that values the “liminal.”

In the latest iteration of her process, Warren has engaged volunteers to enact “short improv scenarios” that seem oddly dreamlike. “I tell them to navigate through an imaginary maze, or have a conversation about their least favorite politician, or pretend there’s a strange creature in the corner and you don’t know what to do.” The resulting scenes, in which characters interact with one another in undefined spaces, sometimes with a chair, ladder, or stool between them as a prop, are pregnant with tension, although what kind of tensions is left for the viewer to decide.  “It’s somehow very significant to them [the characters], but we don’t know what that significance is,” says Warren.

The narratives are nebulous, yet Warren’s painting style is anything but. Her luminous painted Mylar surfaces weave the eye in and out between positive and negative space, integrating her “limbo-land” with the figures and their festively patterned clothing. “The more outrageous the pattern the better,” she says of the “actors” clothes. “I love Hawaiian shirts.” As a painter she clearly relishes in the vivid plaids, stripes, and florals of her figures—even the treatment of faces at moments takes on a pattern-like aesthetic.

To create these artworks, Warren sets up a camera and tripod, snapping up to “a thousand photos. I’ll pick out the 20 I think are the most interesting,” she shrugs. The selected images are then painstakingly combined for compositional effect and interpreted with Warren’s characteristic watery strokes. She explains that the ambiguity is calculated: “They’re not portraits, they’re just vehicles.”

The process itself has led to new forms and format; one work will be a sketchy, diaphanous animation that resulted from the artist’s bank of copious photographs. But whatever the format, Warren seems to find meaning in the process itself. “Painting is very meditative, I think, for most painters. It creates a ‘zone of awareness,’ a way of being present in the moment.” She speaks of an interest in the “evocative, half-poetry of Annie Dillard” and an affinity for French films. “They don’t spell everything out…you’re never quite sure what happened. An American audience wants closure, everything needs to be wrapped up in a bow.”

But Warren refuses to work in this way, and she’s (quite literally) inviting her audience to engage. On May 31 she will stage another series of “interactions” in the Anya Tish gallery space. The event is open to all who would like to participate.

So far, she has found her models to be both “amused and gracious.” She laughs that someone described her figures as having exaggerated gestures, saying “I drove by the MFAH the other day and saw those figures of Michelangelo,” [she strikes a typically Mannerist dramatic pose]. By comparison her works are far subtler, telling a story while allowing us some leeway in deciding what exactly that story is. Like the works that will be shown in the gallery, a participant in Warren’s “interactions” should expect to be painted with exactly this combination of intention and speculation.