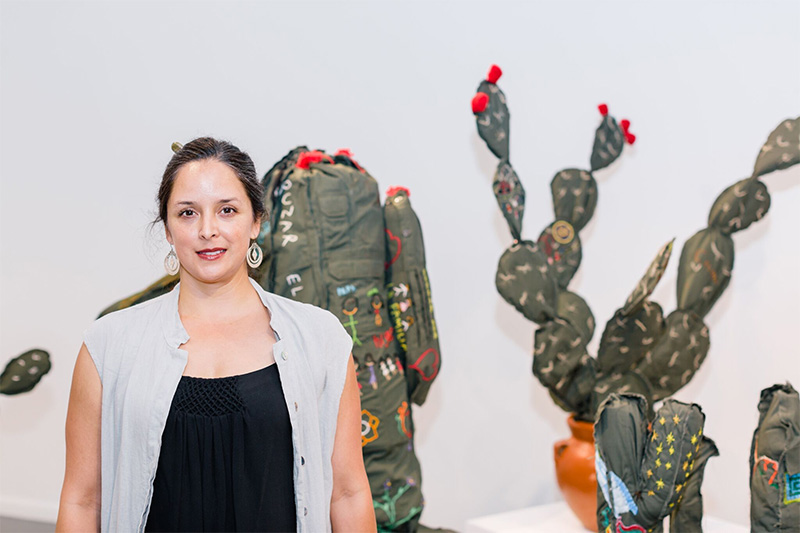 A loose thread might be considered an error, a nuisance, or a sign of things left unfinished. To artist Margarita Cabrera, loose threads are “a reference to the labor and the importance in the act of making by hand.” In this case we are talking about the labor of many “hundreds of people over 20 years.” The threads dangle from one of Cabrera’s largest and best-known bodies of work—a series of soft sculptures, including everything from bicycles to military-style vehicles to the plant life of the southern US border. Cabrera works in a manner familiar to many artists of her caliber, operating with large groups of craftspeople to create vast and multifaceted works that could never be accomplished by a single set of hands.

In April 2019, she unveiled Árbol de la Vida, a massive sculpture that is actually 700 individual ceramic sculptures housed in a branching structure along San Antonio’s riverwalk expansion. This fall she’s been named the Art League Houston 2019 Artist of the Year. In an exhibition titled What Art Can Do: Margarita Cabrera—The Collaborative Act of Making, which runs through Nov. 2, the artist presents a direct rebuttal to the “factory” model popularized by Warhol and later given the steroid treatment by Koons. Instead, the work speaks in a much older language of community and shared work, both through its focus on craft “such as papel picado, copper hammering, Alebrijes, and ceramics as well as fiber processes” and in the way it centers immigrant communities. This ethos permeates all the way to the artist’s phrasing when speaking about her process: She uses the plural “we” or “our” to discuss the projects she generates. It’s all part of her central ideology that “art must be used as a transformative tool.”

This capacity for sharing credit can’t really be overstated as the most radical facet of Cabrera’s work. Since the days of Rafael and Bernini, the “top names” have received the laurels rightfully earned by their apprentices. But, as Cabrera explains, “The innovation is in the transformative processes where the end art product is not the central concern but the establishment of inclusivity and equity is.” In other words, the objects aren’t necessarily the point. Would Bernini have even understood this concept? Because of her radical vision, Cabrera’s receipt of the 2019 Texas Artist of the Year Award, an honor to be bestowed on October 11 at the Art League gala, feels especially daring. The artist frames it with optimism. “The recognition from an established art organization and the community is really hopeful given the concepts presented in the work.”

Cabrera’s work is especially suited to the public realm due to her focus on community, but she is wary of following the model of public art (sometimes derisively referred to as “plop art”) that some cities have adopted. “If we realize that the power in public art to bring people together, uplift the community spirit, boost the economy as it engages community to define and redefine culture in positive and innovative ways, then Public Art enters a whole new ballpark and it is free to be what it is meant to be. As we say in Spanish, ‘entra en su mero mole.’ ”

With upcoming exhibitions at the Art Museum of Southeast Texas, McNay Museum of Art, Ruiz-Healy Gallery, and Talley Dunn Gallery, Cabrera’s work is still firmly situated among the traditional power centers of the art world. As she often repeats, “Art has the capacity to reflect what is around us like a mirror,” but her process of engagement with people historically held at arm’s-length by the fine art world has the potential to remake the mirror from the ground up.