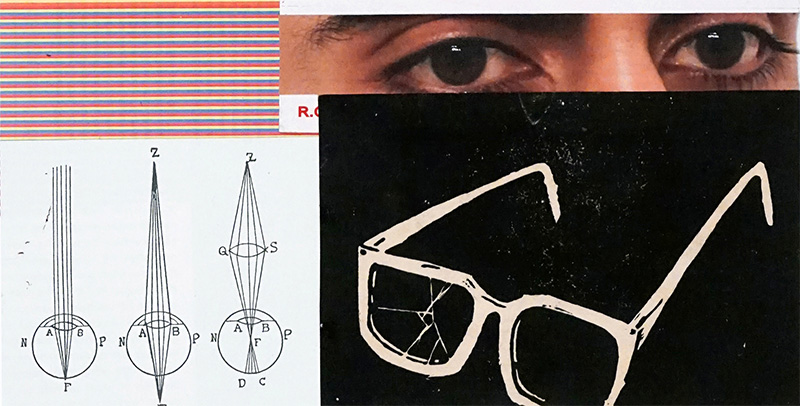 “I was like a waiter at a wedding,” Michael Golden laughs, recounting the process of creating some 70 new collages to be exhibited at the Galveston Art Center. He describes doling out images over 14 x 17 inch sheets of Bristol paper, arranging and rearranging until each image was to his liking. “I would make about 15 to 20 at a time and then glue the whole group and then start more.”

Over the course of 25 years teaching at Houston Community College, the artist amassed a deep file of images—snakes and spiders, birds, the moon, blood—that make up an ever-expanding personal iconography. After retiring from teaching, he says, “the first thing I did was go through those files.” Now those materials are in boxes, flat files and racks that encircle his high-ceilinged studio.

The works for the GAC show, titled 0 – Connected which opens Jan. 13, are framed and impeccably wrapped in a series of large containers. “I’ve always cranked work out,” he says, “I’m one of those people who work in spurts.” The artist, whose large-scale paintings and intimate collages vibrate with color and the perpetually unfolding patterns of “sacred geometry,” speaks in an unassuming way about the sometimes treacherous path that has led him to this point in his career.

Golden has come perilously close to death on several occasions. “I used to make work about being sick, but I can’t live like that.” Living with HIV, the artist made a series of works using images of keys. “I’d go to the doctor, he’d tell me how many T-cells I had, and I’d go home and count out that number of keys.” The paintings were in the jarring and visceral colors of “bodily discharge.” But in some ways, art about sickness became a self-fulfilling prophecy. When a corporate collection used his work in “promotional materials” for a new drug, Golden was uncomfortable. Additionally, the artist, who was born with a heart valve problem, underwent open-heart surgery in 2010. “To think that they had my heart outside of my body,” he says solemnly. “I started thinking, what makes a life? Whether it’s human, animal or plant.”  He began to employ a technicolor palette. “I don’t like color combinations of color theory,” he says, choosing color instead “to raise people’s vibration.” The result is intense, vital, and sometimes experimental. “In some of these yellows, I put turmeric in.”

This inclination toward color as a spirit-lifter belies the simmering undercurrent of violence that remains in much of Golden’s work. Atop his brilliant backgrounds, arranged according to “the golden mean” or patterns of sacred geometry, the possibility of danger is ever present. Images of blood and old EKG strips abound. “This was before HIPA,” he says, pointing to one collage with the faint pencilled blips of a heartbeat, “I used to hide stuff from the garbage at the doctor’s office.” Additionally, the animals he depicts are often “hunting, stalking, or looking for prey.” In one collage, a red, yellow, and black striped snake and a police officer confront one another.  “Everyone asks, is that a coral snake or a milk snake?” When asked to define the venomous potential of either of the collage’s figures, the artist demurs.

“I do think of myself as a wildlife painter,” Golden states when asked about his prolific depictions of animals and plants. But he is quick to point out that the history of this field, and its most famous practitioner, is checkered. “Audubon killed a lot of animals,” the artist explains. As a response, Golden bought original copies of the famous naturalist’s book and “whited out” Audubon’s backgrounds. When the mise-en-scene is removed, the animal’s lifelessness is shockingly evident. “It’s a dead bird,” he says. Golden describes his intervention as a way of “honoring all the animals [Audubon] killed.”

Golden will expand his focus on bird-imagery in a two-person show with Beth Secor titled Under the Auspices, at Lonestar Cy-Fair in June. The birds in these larger paintings fly solo under subdued evening skies. “I looked for famous patterns of stars in art history.” Whether created by human hand or natural selection, Golden looks for and finds these patterns everywhere. It seems like the “pages in a science book,” he says. Over a career spanning decades, the artist has learned to rely on his hard-earned intuition when it comes to novel aesthetic combinations and associations. He admits not fully understanding the logical import of these “pages” just yet. “I feel like if it would get discovered 50 years from now it would make a lot of sense to people.”

He shares an anecdote about a brain scientist who happened into one of his open studios, pointing out a possible connection between the images in one of his paintings and current science on autism. The painting is large and propped high on one wall of the studio. It depicts a series of geometric forms based on “a chemical that your brain releases when you are sleeping.” Like the collages, it deftly combines flatness with dimensionality. “For me it’s about tolerance,” the artist states, later explaining that “on a spiritual level, [I want] to infuse a message of tolerance.”