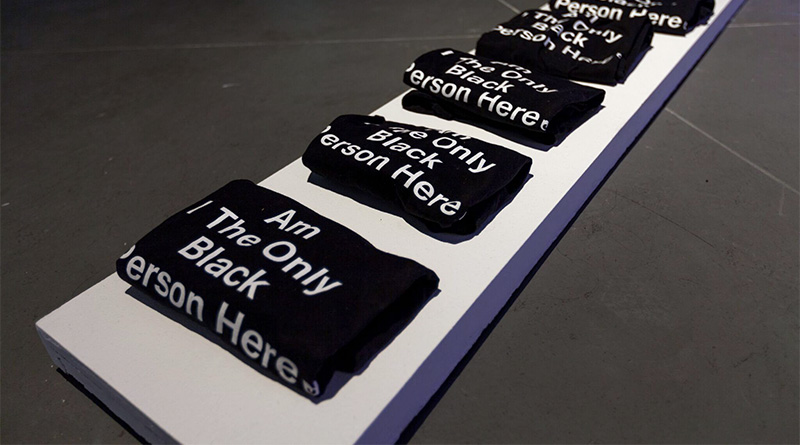 All the dreamers have gone to the side of the road which we lay on, 2014-2017, fabric, dimensions variable.
Courtesy the artist and Art League Houston.
Photos by Alex Barber.

It’s not easy to describe Houston artist Nathaniel Donnett’s studio. For the artist, whose work finds expression in a wide range of modes, the studio has a way of expanding beyond the walls of his art-making space into the larger world. It pulls into its orbit unexpected objects and methods of communication, as well as history, especially the kind of history that doesn’t make it to the textbooks.

Rather than focusing on a specific physical space, the crux of Donnett’s creative practice is something that he has termed “dark imaginarence.” He threads references to it throughout our conversation, providing examples, descriptions, and context. It is a descriptor for a phenomena that has always existed, but “dark imaginarence” is outside the strict limitations of Western art’s traditional vernacular. Specifically, it references African-American’s “creative ways of being in space. It’s definitely anti-status quo. It’s about odd things, survival.” There’s an urgency to this way of viewing the world, an alertness that must be ever-present. Donnett uses the word, “survival” again to refer to his own prolific use of installation. “It’s do-it-yourself. It comes from my roots in music, hip-hop and a little bit of the punk rock generation,” he says. “You have [to use] the minimal amount of things to say a lot.”

The artist’s unconventional practice unfolds in complex layers, which he uses to speak to those “who may feel art is outside of their everyday life,” as well as those versed in art history and theory. “I try not to exist in one framework or one space,” Donnett explains. “When I was younger I didn’t go to museums. I work out of the space of working class and poor people as a general rule.” A good example is his project on social media called #houstontopsculptors, in which he documents found sculptures around the city. Through this hashtag, the artist asserts that trash on a curb, hoses draped artfully over a fence, or a well-placed broken shopping cart have aesthetic value. “These are intentional decisions. I’m one of those ‘art-is-life’ people.”

The project is a response to Jean-Sebastien Boncy, who contributes along with Donnett to Not That But This, a webzine which describes itself as a “blog created out of necessity by artists, writers, and various creatives, that seeks to showcase and celebrate contemporary art and culture created by people of color throughout the African diaspora.”

Pulling up photographs of a project in Houston’s Third Ward in which he inserts hair into buildings or cracks of buildings or houses, Donnett explains “It’s about stepping out of art categories.” It’s art in spite of, or rather in subversion of, the dominant Western narrative. “It’s a poetic subtle gesture,” he muses. “I understand that this is the city of NASA, space and the future, but having a future without acknowledging your past is dangerous.”

For a new exhibition opening at Houston’s Art League, on view through Jan. 20 and funded by grants from the City of Houston through Houston Arts Alliance, Donnett is tying his own work to a long history of vibrant protest movements created by African Americans while slyly referencing geometric abstraction. The show will hint at movements from “the late 60s and 70s, the Black Power movement and the Black Art movement,” all the way up to today. “It’s about the way Americans, particularly Black Americans, have imagined space,” he says.

Tacked to the walls of his studio are portraits in progress, incorporating the rollicking graphic style of the 70s collective AfriCOBRA. He’s creating protest signs with iridescent auto paint and glittering flakes to recall the 80s and 90s. A massive “painting” made of reclaimed wood, recalling the wall of a shotgun house, will anchor the show. The broad range of projects and influences belie the specificity of Donnett’s vision: “There’s not a formula. When you group some of those things together, then you see the connections.”

Even within the confines of academia, Donnett’s work demands this level of self-inspection. For Looking at the Overlooked, a current three-person exhibition at Wichita State University’s Ulrich Museum, the artist created a two-person script breaking down the importance of “line” as it relates to human expression. One version of the script reads like traditional academese—which is to say that it is purposefully impenetrable. The other, read by the artist, electrifies the same content with the urgency and purpose of everyday speech. This piece is a clear bridge between Donnett’s ideas about the perceived differences between the art world and those outside of it. “There is a distinction, it reveals the systems of class,” he says. “I can’t be hypocritical. The only thing you can do is subvert it, or acknowledge it.”

For Donnett, objects overlooked or categorized as “junk” by some have as much (maybe more) aesthetic potential as canvas or bronze. “I believe that objects have a life, their movement or the way that they’ve been handled,” he says. “It’s about starting to tell these stories, not just saying ‘these things are useless.’”

Viewed through the lens of “dark imaginarence,” Donnett’s world is electrified—a place where past and present intertwine and the steep boundaries of what constitutes art become as easy to surpass as stepping outside the studio.