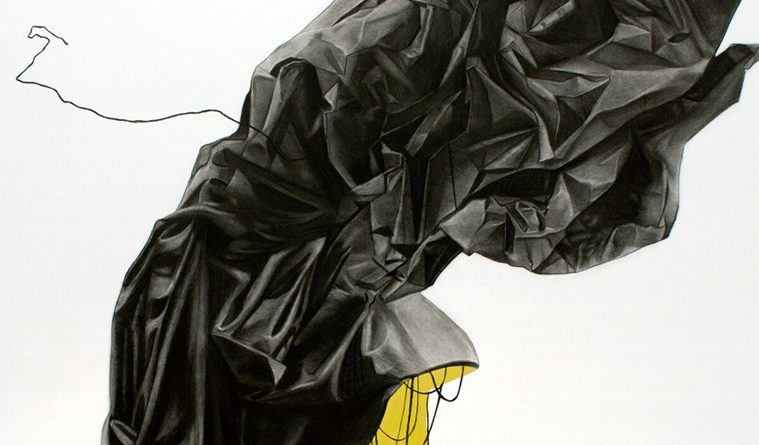 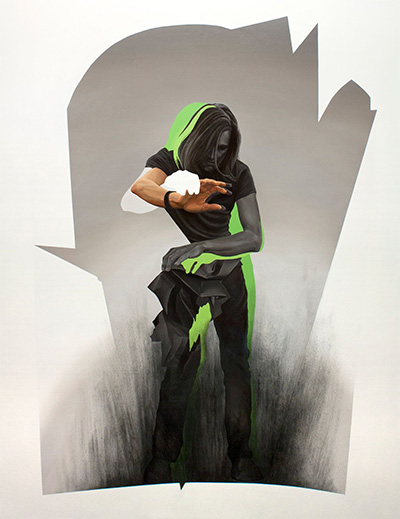 “Do you know the stereotype that any male who’s approaching his mid-30s becomes really interested in World War I or World War II?,” Shayne Murphy laughs sheepishly, including himself in this group. “It has to do with the whole realization of the ‘fragility of life.’”

We are standing in his home studio, ringed by his latest series of paintings. Tacked to the walls next to the sleek panels are grainy black and white printouts of troops in a trench, the torn black scar of which features heavily in Murphy’s latest “imagined environment.”

“My work has always had a darker element to it, but with this body of work it has been pushed to the forefront.” Murphy’s first solo effort in Houston will be shown at Anya Tish Gallery, Fluorescent Gray, Oct. 14– Nov. 12. It’s an apt fit. “She likes geometric forms, work that’s craft-oriented,” Murphy says of the gallerist. We convened in the waning days of his summer vacation from Lone Star College in Montgomery, where the artist teaches, as he prepared for the impending semester and his fall exhibition.

Murphy’s latest works are pared down for maximum emotional impact. Most of the atmospheric treatments in his earlier work have fallen by the wayside, in favor of a starker, crisp style. The first one that he shows me, Trench, is a rendering of an eponymous excavation in expressive black charcoal, surrounded by neatly masked forms of gray and bubblegum pink. The trench is littered with tiny banderillas, the festooned darts that a bullfighter uses to anger and excite his horned opponent. It’s a jarring combination of desolation and decoration that is sprinkled throughout the work through color choice, material, or content. “I just felt more confident about the imagery,” Murphy says of his new, edited style. “Once I started making the backgrounds minimal, the colors stood out.” 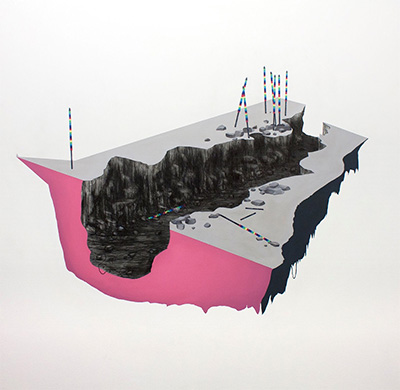 His latest “imagined environment” seems predicated on the notion of fracture. “Formally, I was drawn to how the trenches resembled physical gouges and cuts across the land,” he notes. Every piece is a floating series of interacting fragments within a glossy white void. The space around the shapes is almost a character unto itself. Its cleanliness acts as a foil for deep, matte blacks or carefully meted out color. One piece, titled Cadmium Crush, evokes a “World War I tin mask worn by a disfigured soldier,” but its title refers to “those Crayola names from childhood.” His model for this piece—and for all of the other figurative works in the exhibition is his fiancé— a fact which might give some fiancés pause. But Casey Stranahan is well versed in the artistic process. “Maybe because of my background in art it wasn’t something that even crossed my mind as unfavorable,” she says of the process. “I was a bit shocked to find out after the fact that my portraits…were inspired by people who had part of their faces blown off in war.”

The content of Murphy’s work is hardly commercial, but his floating and carefully-masked images retain traces of his previous career. “Before grad school I worked as a graphic designer for five years.” After wrangling with clients over designs, and “having an idea slowly whittled down to a shell of what it was,” Murphy knew he was ready to dedicate himself to a career as a fine artist. He started with an MFA at the University of North Texas, learning from some of the state’s preeminent artists, painting professors that were both inspirational and rigorous. Murphy credits artists Annette Lawrence, Susan Cheal, and Matthew Bourbon with building his artistic chops. Bourbon in particular was “one of those people who made you question,” he says. “My approach to my work is very controlling,” Murphy quips; whether his exacting approach is a result of his education or graphic design background, the painter has honed it to his purposes. 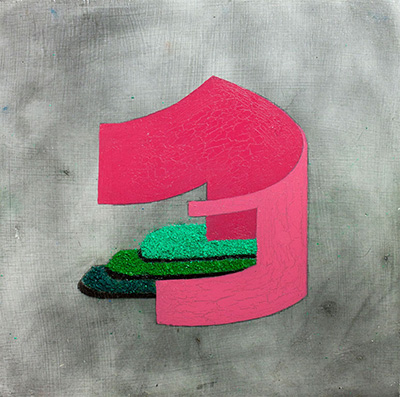 Since graduating in 2013, the artist has returned to his hometown of Houston. “I find that the art scene is a little more diverse…less concentrated,” he says. There, he has taken a position on the other side of the lectern, teaching three to four classes a semester at Lone Star College, using the bulk of his summer and winter breaks to “at least get things going” in the studio. Of his students, Murphy says, “It’s fun sharing ideas with them. It inspired some of the formal elements [in the new work].” A German Expressionist film that he shows his students, The Cabinet of Dr. Caligari, is particularly evident in the high contrast black and white forms throughout the paintings.  Rupture, a square panel featuring a billowing black drapery form in charcoal, is a composite based on a still life he set up for his students to draw.

It may be a stereotype that males of a certain age develop a fixation on war (especially the ones that in hindsight feel heroic), but Murphy, as an artist early in his career, is creating paintings that appear hopeful in the face of grim subject matter. “Several of the paintings were inspired by ritualistic war dances and dances for the dead,” he muses. This is an interest that smacks of a more mature type of introspection, an acknowledgment that in the face of our own mortality there is no better way to employ our skills as artists than to create beauty.