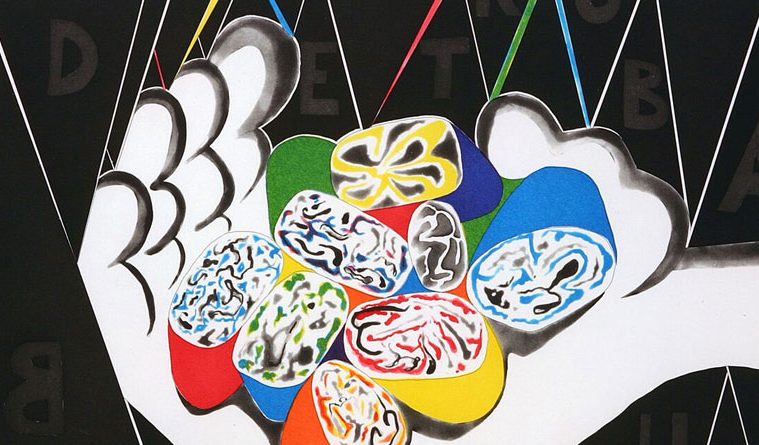 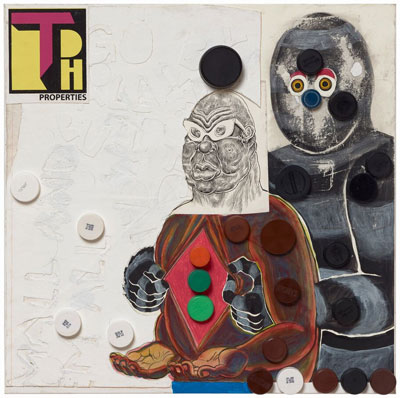 I have a theory that artists have the most interesting art collections.  Admittedly, it’s a difficult supposition to test or quantify. But a recent visit to the studio of Trenton Doyle Hancock, Art League Houston’s newly appointed Texas Artist of the Year, provided me with supporting anecdotal evidence. He counts among his most treasured collected works a “piece JooYung [Choi, his artist partner] gave me, a year before we even thought about dating,” as well any late-Gen X/early millennial’s dream: “my Garbage Pail Kid collection. Original paintings from the early to mid-80s.” He also waxed poetic for a bit about a certain thrift store portrait. “I bought it in an ironic frame of mind, but it’s much more subtle than I gave it credit for,” he says.

The collector in Hancock is easy to spot. One glance at his teeming but classically organized canvases pin him as a stockpiler extraordinaire. Characters, influences, and collaged objects amass to form the central narrative of his work: the “mound,” which he describes as “concentric, amorphous and cellular.” The sheer amount of stuff in Hancock’s workspace—color-coded plastic tops in bins, canvases of every size and in every stage of completion, toys, and a drum set—tempt me to describe him as a maximalist. He disabused me of this notion, however, suggesting his love of “tantric painting” and asserting that much of his work is “searching for his inner minimalist.” He wondered aloud, “How much stuff can I get together before it becomes singular?” Hancock has built his career on pulling seemingly disparate parts into a cohesive and surprisingly linear whole.

This knack for mixing references becomes clear when Hancock references both Charles Schulz (of Peanuts fame) and the Bible in describing his 20-year adherence to an overarching narrative as the foundation of his work. But this, as all of his artistic practices, has a pragmatic end. “When you’re excited by everything, how do you get back to yourself?” Hancock asks. The unifying character, the “mound,” is constant but infinitely changeable. “I created a Barbie doll and then dressed it. I started to see myself in this thing—at the center of this cosmology.” It’s a highly unusual move for a contemporary artist, most of whom define their work internally, using a signature brushstroke or a singular viewpoint. “I don’t think painters think in those terms because they’re taught not to. You also don’t talk about your work in terms of religion,” he says. But he describes the characters he’s created as “my version of a Bible story. Who were my Jesus and the saints?”

Religion is an important touchstone for Hancock, especially for its reliance on ritual. Growing up with parents who are Baptist ministers in north Texas, he has imported certain aspects of the daily repetition of religion into his practice, explaining “I paint when I can…I’m always doing something.” He acclimates to the studio by playing his drums, “I play for about an hour or so, to get my muscles warmed up.” He also draws constantly. “The drawing serves so many different purposes. It’s like eating or taking a walk. I draw to document things, and drawing serves as a basis, he says. These tenets are grounding elements for an artist who “at any given time, is working on at least three different projects.” 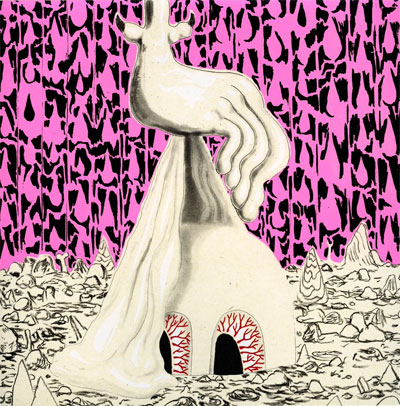 Currently, Hancock is working on a project in Qatar, creating Halloween costumes in collaboration with the Fanoon: Center for Printmedia Research at Virginia Commonwealth University. He is also working on a “series of action figures” with collaborators in both Philadelphia and Canada. But he considers it important to never become too distant from his own work. No matter the geographical distance, “I want my hand in them,” he says.

Orchestrating a veritable universe of characters and multiple far-flung projects is a task that many artists would base out of the art world’s de facto capital, New York. But Hancock’s affinity for Houston has not yet waned. “Early on it was this contract between Houston and me.” He allows that his artistic introduction to city through the Museum of Fine Arts, Houston, Core Residency Program in 2000 showed him the very best of the city. “It sold me. [Houston] was still a ‘secret’ at that point. It was this amazing, resourceful place….tight knit.” He sees greatness not only in the city’s manicured museums and hallowed institutions, but also in the “detritus left behind. There’s all of these venues, some of my favorite thrift stores.”

The Texas Artist of the Year exhibition runs from Sept. 29 through Nov. 17, and will be held this year at the Rice Gallery space, with an artist talk on Nov. 1. The show will be a collection of a different sort, which Hancock describes as a look back “charting my 20 years as a professional artist…There will be “a piece from each year starting in 1997.” He also hopes to highlight his recent “return to old ways of doing…a cyclical returning to my youth.” And having built up such a body of methods, modes of working, and an entire universe of personal iconography, there will no doubt be plenty to draw from. He explains, “I want the work to mirror my fervor for life.”