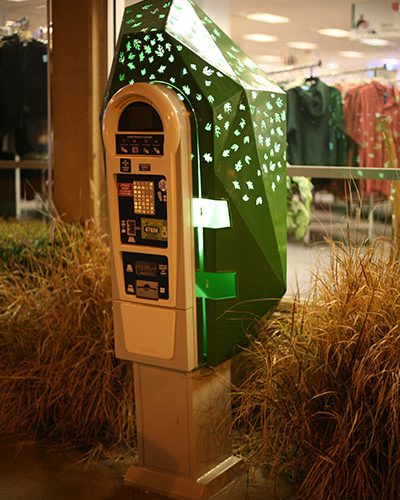 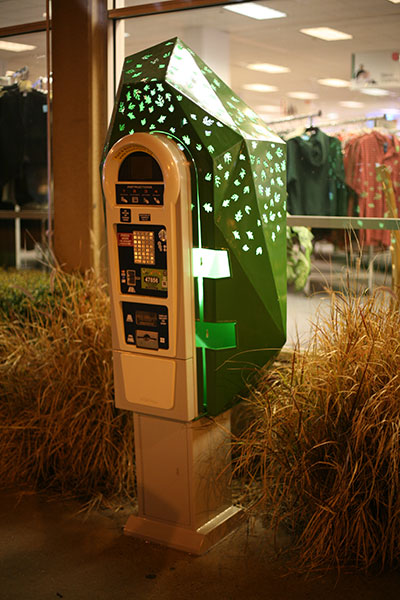 Lace doilies are more commonly associated with dainty tea parlors than industrial warehouse spaces, but artist Troy Stanley’s delicate creations are the products of heavy-duty power tools, not crochet needles. His latest—incised from a single sheet of fine plywood—hovers slightly away from his studio wall, looking even more fragile amid the detritus of two public art commissions and an upcoming group show with Barbara Davis Gallery.  It has been something of a breakout year for the artist, beginning with a solo exhibition and ending with three public projects.  In the wake of the recent unveiling of his newest public piece on Washington Avenue, Stanley gave A+C a look behind the scenes.  We discussed the contrast between public and private artworks and Stanley’s laborious search for less control, an attribute that sets him apart from many artists and imbues his intricate forms with just a little bit of danger.

Stanley, an alumnus of the University of Houston, was once on the path to a career in medicine, having begun school as an engineering major. A wealth of knowledge about mechanical and biological processes explains the complex systems he likes to create, but his art-making, as he describes it, sounds like the reverse of the scientific process. Instead of forming hypotheses and testing them, the artist takes predictable materials (wood, metal, paper, concrete) and tries to “break them down” to the point at which they are slightly out of his control.  He then approaches “like a viewer,” making adjustments and discoveries along the way.  His materials, often rigid at the outset, begin to mimic organic forms, sometimes as individual images (like the latest piece in his studio), and sometimes as part of interacting systems, as with “Zephyr,” a piece he reimagined for the Texas Contemporary last year.  In each iteration of the piece, (first shown at Lawndale Art Center) Stanley creates a field of swaying fronds. The gentle wafting of head-high crops that one might encounter in a rural field is recreated using thinly stripped Masonite, a material that begins in nature but is then heavily processed. 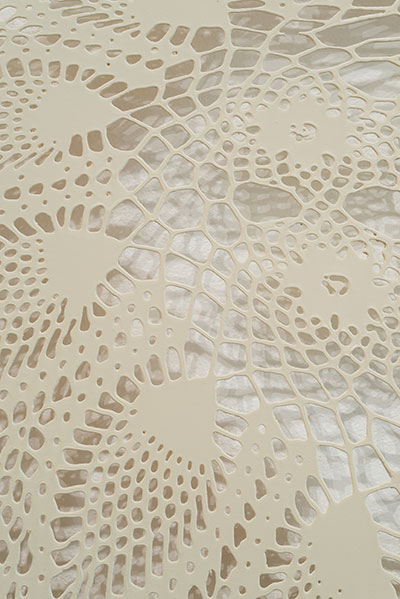 The kernel of this idea is repeated to very different effect in many of his works, including “and the trees held in higher views,” a piece from his last solo show which was collected by Houston’s Bush Intercontinental Airport.  What at first glance resembles a thin sliver of a massive tree trunk is actually constructed entirely of painstakingly spiraled cardboard.

It’s in this vague space between what is “nature” and what is “synthetic” that Stanley seems to flourish. Thus, the Washington Avenue parking meter project was tailor fit to his interests. “I wanted to make a piece that was Washington Avenue; the club lights, the hedges, and the geometry.”  With the raucous energy of that street in mind, he constructed geometric metal topiaries that enfold the meters like origami foliage. At night they are lit from within, spilling organic shadows on surrounding walls.  For Stanley, the appeal of working in the public arena lies in the opportunity to experiment with new materials and processes.  There can be drawbacks as well; working with other designers and engineers risks the too-many-cooks-in-the-kitchen effect, the chance that the essence of the idea might get muddied. But so far he seems to have had luck in that area, especially working with the Houston Arts Alliance and the Parking Management Department, whose laissez-faire approach allowed him creative freedom. “They were quite pleasant to work with,” Stanley noted. “They trusted me to do what I wanted.”  The project also garnered support from three Washington Avenue businesses that allowed Stanley electrical access. The Dark Horse Tavern, the Salvation Army and Winston’s on Washington keep these pieces in power.

For this artist, the world seems to hold an endless array of systems, materials to be “broken down,” reconfigured or reimagined. The intricacy and elegance of these works is simply a metaphor for the complexity that one might find in the world at large, in something as small as an atom or as vast as an ecosystem.