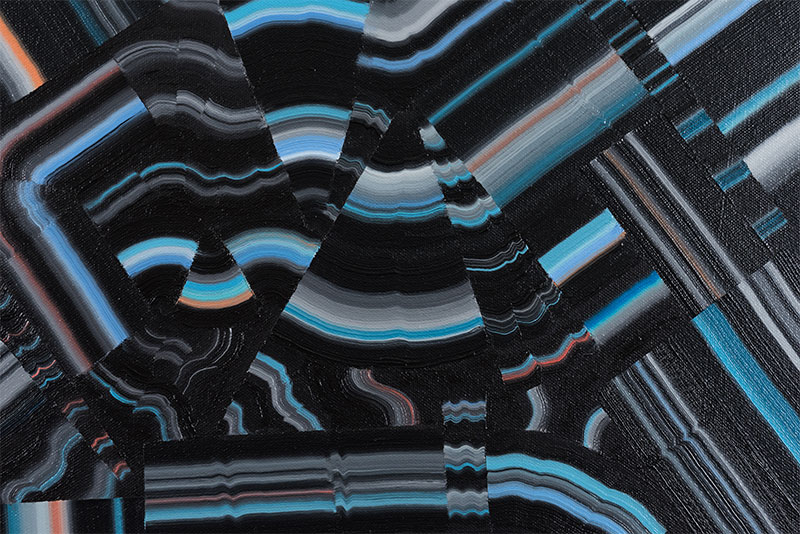 At first glance, Vincent Falsetta’s studio doesn’t seem different than that of any other established painter, with its high ceilings and ample light. Along a single white wall, the artist has hung paintings he is preparing for an upcoming solo exhibition at Houston’s Anya Tish Gallery on view Sept. 6-Oct. 19.

Plastic-wrapped paintings and storage from his decades-long career occupy much of the space. Falsetta’s intensely fastidious process is the thing that really sets him apart. Every aspect of his painting process is documented, and this documentation in itself becomes a means of making art— one that illuminates Falsetta’s artistic motives better than any individual piece.

Rather than turning his paintings into circular arguments, this intense documentation opens the aperture of interpretation even wider, both to the viewer and the artist himself. “If there’s any reality to human beings only using nine percent of their brains,” he shrugs, “how much can I claim with nine percent? I have to let it go and take its toll or take its rewards.” It’s this attitude (and probably his more than forty years of experience) that allow Falsetta to state, “I’m comfortable in my own skin.”

Each painting the artist makes is identified by an alpha-numerical system of his own creation. He takes copious notes while working, capturing everything from his own drifting thoughts to formulations of paint to the music playing in the studio. A tripod is carefully pointed at the painting he is currently working on, documenting its day-by-day sections like the giornata of an Italian fresco. After he has completed a painting, the notes are finalized on what looks like a typical index card, but is in fact a contrived facsimile. “I paid a lot of money to make them look like cheap index cards,” Falsetta says. “They’re made by printmakers on Strathmore paper.” There are armies of painters and art historians whose nearly forensic eyes can pull apart works of art, trying to understand how the thing is built. Falsetta has done the work for them.

For the Anya Tish show, Falsetta divides his paintings into two bodies of work. One he refers to as “filled in,” and the other contains areas of dragged or blurred paint. Each feels like a member of the same family, but they exert drastically different spatial effects. He turns off the overhead lights in his studio and lets the outdoor light, filtered through the thick canopy of summer leaves, rake in from the windows. The paintings reveal a physicality not apparent at first glance. “I’m interested in the objectness of them,” Falsetta explains. “I’ve been a glare painter for a long time.” Regardless of the method, he notes, “The palette is planned out. The size of the brushes is planned out,” and also “a lot of it references the body.” The upcoming exhibition, titled Sensing the Pulse, is unified by Falsetta’s squiggly mark-making as he pulls paint across the surface. An occasional stutter or wiggle in the paint moves the eye rhythmically through the interlocking compositions. For a period in the 80s and early 90s, Falsetta included some recognizable imagery in the work, but, he states firmly, “I have always been an abstract painter.”

The references he mentions throughout our conversation are many and varied, from muscle striations to neon lights to hot-rod tailpipes, but Falsetta is wary of pinning himself down with too-direct metaphors, and it would go against his process to be too definite. “I enjoy the adjacent,” he explains. Instead he relies on instinct honed through years of practice. “I think I am interested in the content of color. Some of it is unconscious and some of it is conscious,” he says. “My environment transforms my color.” Although the paintings are made with a high level of intention, there is room for editing in the making of a work. “If a painting feels too sweet, like too much cake, I respond sometimes with color.”

“I’m a to-do list kind of person,” Falsetta explains. This simple statement runs counter to so much of the mythology of artmaking, especially in the world of abstract painting. We imagine something grand in the youthful conviction that the whole world can be known, that it is possible in a human life to reach a resolution, or a state of self-satisfaction. But so much of life is actually just to-do lists. And when youth’s grandiosity has run its course, if one is a thinking artist, one will arrive at that other side, that beautiful “letting go” that artists like Falsetta couple with skill to make something far more interesting than a single, resolved truth.