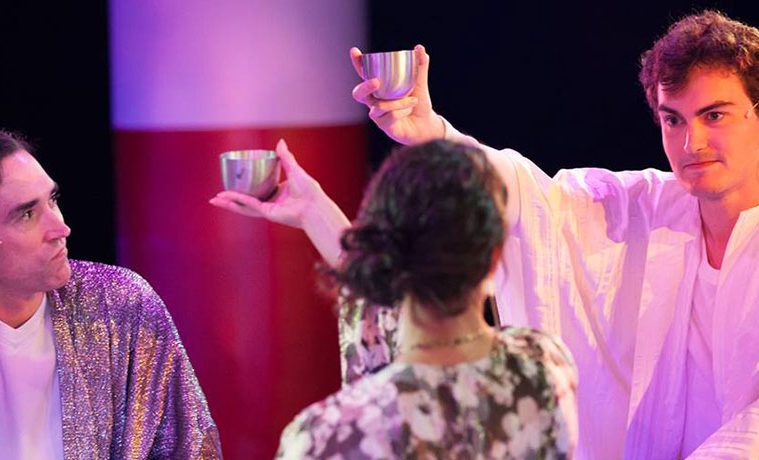 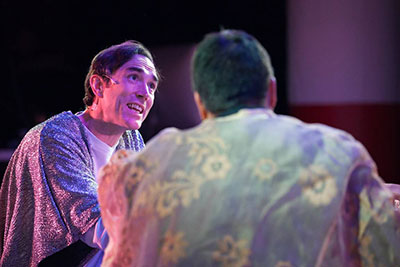 “How do you feel? Like yourself?” That’s a loaded question in Gordon Dahlquist’s Tomorrow Come Today, a world premiere currently on stage at Dallas’ Undermain Theatre, through Oct. 11.

It’s a science fiction play and before you ask, yes, science fiction is a rather atypical genre for a stage play to fall into, a fact which has succeeded in generating a healthy amount of buzz for Undermain’s production.

Tomorrow Come Today, in true science fiction form, is the story of a not too distant future, in which the wealthy have discovered a way to more or less, gain eternal life, by “transferring,” a process which allows them to swap their bodies, for newer, healthier ones at will.  I doubt anyone ever truly feels like themselves in this future.

The play opens on Poul (Montgomery Sutton in the first act), who has just received a remote transfer, a process which allows him to transfer automatically, after being nearly killed.

The play is performed in three acts, each technically progressing in time for the characters, but, unsurprisingly, time is not linear in this not too distant future, and the final act actually takes place in the past.

An early scene takes place around a dinner table as Poul and other members of the elite, bemoan, if only halfheartedly, the dire state of the environment. It soon becomes clear that Poul is involved in some mysterious research which may be able to save the planet, research which makes him a target for “extremists,” who interrupt the evening by breaking into Poul’s home. The artificial intelligence in this science fiction play take the shape of  “Houses,” robots who serve more or less as hyper-intelligent personal assistants to the wealthy. Although not main characters per se, the robotic “Houses” in Tomorrow Come Today are clever, fun to watch and on occasion serve as important pawns in the play’s plot.

While there are a number of current issues incorporated into the plot; extreme wealth and poverty, surveillance and terrorism, to name a few, the environment, and our willful, and collective failure to plan for its future, take center stage. In acts two and three, Carol, Shannon Kearn in the first act (I would be giving away some interesting twists if I cited the actors who play her in the next two), is tracking down Poul through time, in the hope that his research can somehow save the rapidly over-heating planet.

I’ll start by saying this, Bruce Dubose and John Arnone did a masterful job transforming Undermain’s uniquely obstructed space into the sparse world which composes so many visions of the future. Dubose’s sound design was integral, the menacing music and appropriate blips and beeps helped immensely in creating an immersive world within the limits of a theatrical production, and Arnone’s minimalist set design succeeds masterfully. Science fiction is a genre which relies enormously on artistic vision, which this production clearly had in spades, all the way down to Giva Taylor’s costumes, robes, blond wigs, plethora of white and contamination suits, everything worked together to create a complete world with few missteps.

Dahlquist’s script, however, serves as an excellent exhibit A for why science fiction isn’t seen in the world of theater often. Science Fiction writing generally contains a strong political element, which was evident here, but there is also the cerebral, philosophical and historical element prevalent in the genre, which Dahlquist also adhered to in Tomorrow Come Today. Unfortunately, the heavy intellectualism that occasionally works in literature, at least when it’s done well, either doesn’t translate on stage or was carelessly executed by Dahlquist.

Poul and Sabir, Ruben Carranza in the first act, engage in lengthy diatribes on Ayutthaya and Thailand, as well as the inherent contradictions in this world’s wealthy and their lifestyle early in the play, that were far too dense to follow. An unfortunately recurring issue. Far too often the show’s dialogue devolved into incoherence, to no fault of the actors. Apart from the aforementioned, Gregory Lush, Jenny Ledel and Vanessa DeSilvio performed well despite the heavy-handed script.

Eliminating the repetition and incoherent dialogue would serve the playwright well, Dahlquist is on record stating that the play was written on a silent retreat “without any outline or notes,” a fact which may be more evident than was intended.

The performance was a valiant attempt by the Undermain cast to save a play with some potential, but in dire need of an editor.

Go for the staging and if you’re tempted to leave after the second intermission, stick it out, as the third act, thanks in large part to DeSilvio and Lush’s performances and a much more concise script, is the strongest piece of the play.