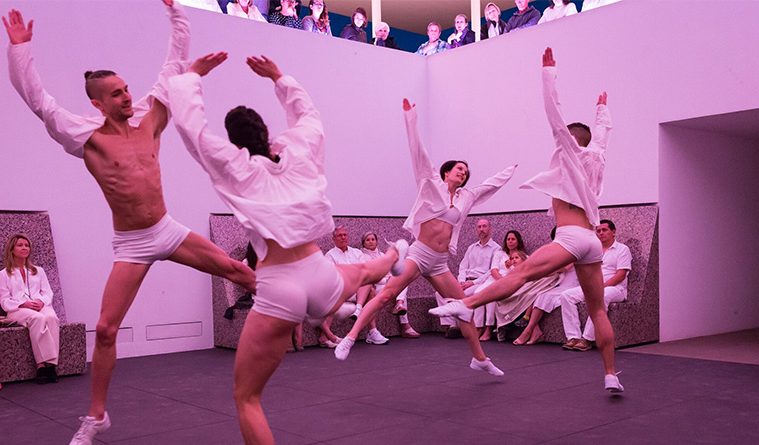 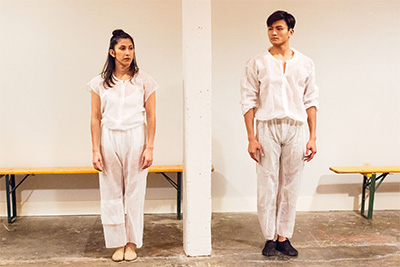 Laura Gutierrez and Chun Wai Chan in The Back Room, choreographed by Gutierrez, Feb. 17-18, 2017, at the Rec Room.

I’m fond of saying that there isn’t a space that can’t be improved by the presence of a dancer, or two, or in some cases, an entire dance company. My thoughts were confirmed by two recent site-specific works in Houston: Laura Gutierrez with Houston Ballet’s Chun Wai Chan in The Back Room at The Rec Room, Feb. 17-18, and Dušan Týnek Dance Theatre with composer Kurt Stallmann in Vespertine Awakenings at the Turrell Twilight Epiphany Skyspace, Feb. 25-27 as part of the opening of Rice’s Moody Center for the Arts.

Although our history may be sporadic, some significant events have taken place here in Houston. In the 1990s, maverick choreographer Sarah Irwin dazzled us with her complicated aerial extravaganzas as part of the International Festival, along with works at Lawndale and DiverseWorks. Who remembers Leslie Scates’s charming Drive by Dances, or her more recent commandeering of the Blaffer Art Museum with the University of Houston dance faculty on board? Site-specific master Stephan Koplowitz created two works of note in Houston: Open Book/Open House for the opening of the Rice Humanities building in 2000, and Natural Acts In Artificial Water, which sprawled out over the Gerald D. Hines Waterwall Park, presented by DiverseWorks in conjunction with University of Houston Cynthia Woods Mitchell Center for the Arts and Aurora Picture Show, as part of the Insight|Out festival in 2012. Karen Stokes, who worked closely with Koplowitz, just wrapped up her multi-year project DEEP: Seaspace, which involved several site-specific works culminating in a final installment at the Hobby Center. Erin Reck’s dancers gently moved across the Mary Gibbs and Jesse H. Jones Reflection Pool at Hermann Park in another fine water-based dance. From the downtown tunnels to the METRO, Frame Dance Productions founder Lydia Hance brings her dance filmmaking sensibility to creating site-based works. On April 22-23, METROdances travels the Red Line with a mobile brass quintet with music composed by Charles Halka, an alum of Rice University’s Shepherd School of Music. 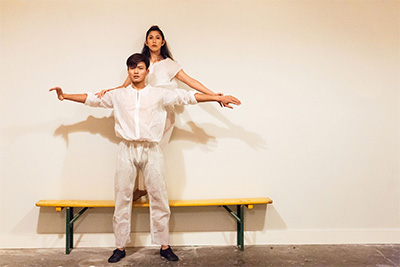 Laura Gutierrez and Dušan Týnek’s recent pieces depart from these previous works because they were ticketed events, so not the kind one just wanders into by chance. Both were outstanding, hand-crafted exactly for their respective spaces, contained a similar Cunningham-based movement vocabulary, and were exquisitely performed by the dancers. Gutierrez and Týnek also share a penchant for restraint, control, formalism and structure, yet the works were quite different experiences.

Gutierrez, fresh off her riveting Howl-like rant at Dance Source Houston’s Mind the Gap, organized The Back Room quickly after falling love with a rather plain, white and red brick room in the back of the Rec Room. “Have you seen the red brick room?” she asked me, with total enthusiasm. I could tell she was already envisioning movement in the space. She’s added her sleek dances to galleries and other spaces on a regular basis when she is not off touring with Jonah Bokaer.

Gutierrez and Chun are joined by the fact they were both named as one of “25 to Watch” by Dance Magazine, but the similarities don’t stop there. They also have an inclination for razor sharp linear movement, rock solid intense focus, and the ability to move the audience out of the way with grace and complete confidence. And, there’s no denying they look and dance great together. 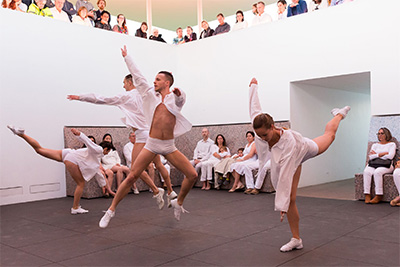 The Back Room was performed twice in one evening, with 20 people at each viewing. The dancers entered clad in white clinical transparent jumpsuits, like scientists scoping out the room with their movement as a measuring device. Performed mostly in tight unison, The Back Room, played out in silence with the exception of the swishing and swooping as a result of the large scale of their movement choices. At times, as a set of mirror twins, they arranged themselves into the contours of the room, nestling into the odd crevices and ledges. As the piece developed, more adventurous partnering emerged, with Chun and Gutierrez taking full charge of the space, sweeping through the airspace as if none of us were in their way. Watching people clear out of the way became part of the experience, sometimes quite delightfully so, especially when choreographer Lori Yuill and her family got nudged down the bench, a lovely ripple of crowd movement added to the fun. People could move around (mostly they didn’t) and take photos. Although the atmosphere may have been casual, the piece itself took a formal stance, creating a vibrant tension. It was all very much about the room, placing themselves in the room, dissecting the room, and ultimately elevating the space.

Like Gutierrez, Týnek is also a pro at site-specific work, and has even created a work for another Skyspace at the Ringling Museum of Art. He’s done several works in the granite quarries of Massachusetts as part of his work at Windhover Center for the Performing Arts. He joked that he was fast becoming known as a “quarry-ographer.” 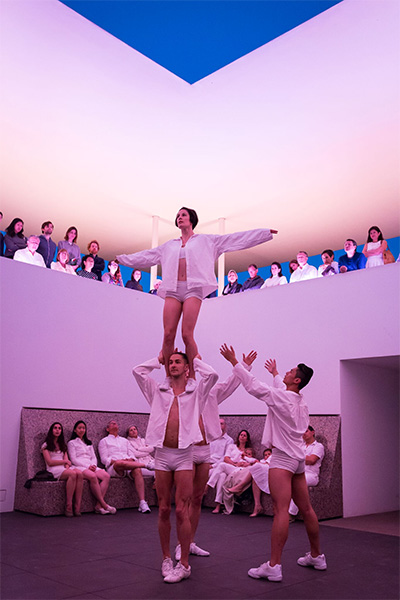 Although the dance took place within the confines of the square tile floor inside the Skyspace, the experience considered the larger surroundings, both in the movement and sound aspects of the piece. With few exceptions, Týnek cleverly restrained his movement choices to a vocabulary of running, walking, linear arm gestures and swift traveling side jumps, all of which reflected the architecture of the space. Thanks to his rather leggy set of dancers, much of the dance had an elongated and expansive quality. A repeating sequence of sauté fouettés utilized the extended line of the dancers’ arabesques as arrows pointing out of the tight confines of the center square.

Dancers entered and exited through the side passages, creating a vortex of energy in the center of the space, and an idea that the boundaries of the dance far exceeded the square floor area. The center had a kind of gravitational pull, as dancers gathered in various configurations, the most striking of which was a human tower assembling just as the sky turned a deep turquoise blue. It was as if the elevated dancer was preparing to ascend through the Skyspace.

Stallmann’s layered score for two singers and recorded sound from a rehearsal of the Rice Chorale with Tom Jaber conducting, indeed put the sound system at the Skyspace to full use, and also addressed the exterior space. At one point, the singers enter the space, bringing the outside in. Stallmann’s physical presence had a power, too, as he orchestrated our sonic environment. At times, the center space was left empty, allowing us to take in the blending of light and sound. I appreciated Týnek and Stallmann’s sensitivity to the grand theater of Turrell’s shifting sky ceiling, and giving those stunning hue-shifting moments a spotlight of their own.

As the dance field stretches its reach, I hope to see more of this kind of work, which seeks a visual and kinetic conversation with the environment, be it a nondescript brick room or a landmark public art work. We can surely add Gutierrez and Týnek’s contributions to the list of significant site-specific works in Houston.