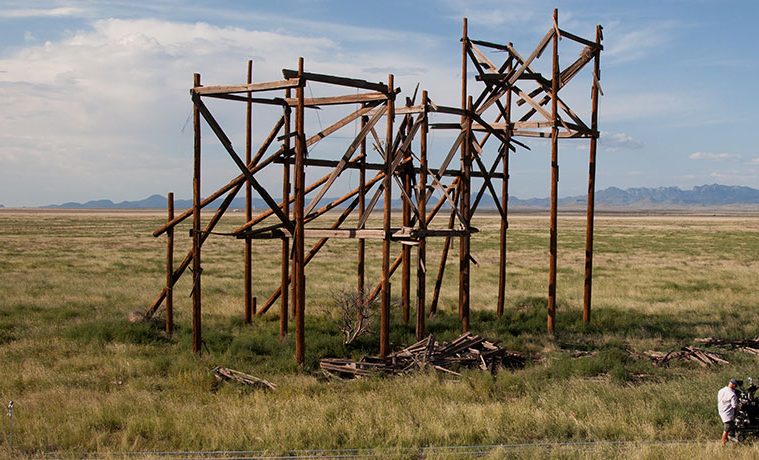 Hubbard/Birchler Explore the Relationship between Location and Film in Texas

We know that every picture tells a story. But sometimes it’s easy to take for granted the very places in which those pictures and stories exist.

Austin-based artist-educators Teresa Hubbard and Alexander Birchler, known collaboratively as Hubbard/Birchler, have been telling complex, compelling narratives through their short films and photography since 1990.

“One reason Teresa and I are so interested in cinema is because it represents a type of storytelling device. We take as a common ground that people are fundamentally drawn to storytelling and to watching moving images,” says Birchler. 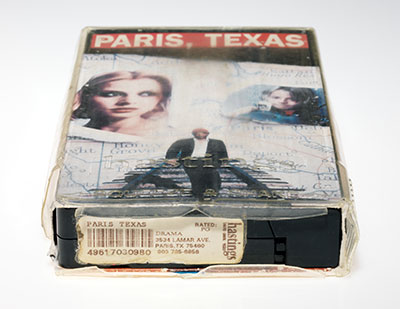 Their exhibition Sound Speed Marker debuts this month at Ballroom Marfa. Then, it’s on to the Irish Museum of Modern Art and, next year, the Blaffer Art Museum at the University of Houston. Through three video installations—Grand Paris Texas, Movie Mountain (Méliès), and the premiere of their most recent film, Giant—Hubbard/Birchler frame the traces that filmmaking leaves behind in physical places as well as in people’s psyches. Sound Speed Marker also includes related photographs and a comprehensive catalogue due to be published in December 2014.

“In a sense, the works in this trilogy are portraits,” says Birchler, explaining that the impact a movie has on a place and its people is “a way in for us; it’s a way of listening and looking closely.”

The artists spent nearly two years just outside Marfa for the filming of Giant (2014), commissioned by Ballroom Marfa, capturing the remnants and “signs of life” of Reata Mansion from the 1956 Warner Bros. film of the same title. Hubbard/Birchler introduce this decaying, skeletal, three-sided facade as a main character in their story, which also depicts a film crew documenting its current-day condition alongside images of a 1955 Warner Brothers secretary as she types the location contract for the yet-to-be-created, soon-to-be-iconic Hollywood motion picture.

According to Hubbard, there is a presumption that nothing is happening in this place when, in fact, everything is happening. In addition to its compelling visual presence against the arid West Texas backdrop, the structure acts as an acoustical instrument. It was one of several important “triggers” for Hubbard/Birchler—things they look for and respond to in their process-driven art practice, things that other people might easily overlook.

Movie Mountain (Méliès) (2011), the creation of which was supported by The Alturas Foundation, is a film about a mountain in the Chihuahua Desert near Sierra Blanca.

“When you hang around, people start talking,” says Hubbard. She also says that movies have seeped into the vernacular of these small towns.

A local rancher they met gestured nonchalantly and drew their attention to a site known locally as Movie Mountain, saying a silent film was shot there in the early 1900s. The trigger was set for the artists to create Movie Mountain (Méliès) that, among other things, hints at the possibility that the silent film was created by little-known French filmmaker Gaston Méliès. Here, Hubbard/Birchler, weave together splintered story lines about memory and forgetting.

For Grand Paris Texas (2009), commissioned by the Modern Art Museum Fort Worth, it was The Grand Theater in Paris, Texas that triggered the artists’ curiosity. Initially they shot a few photos as they passed through the small town and then went on their way.

“When we saw the cinema in Paris we were interested in it, but not more than in any other small town—it was not spectacular in any way. It had a grand name, but that was it,” says Birchler.

They learned the cinema had been out of operation for quite some time and decided to schedule a visit to see the interior. Wearing masks and headlamps, the two artists joined hundreds of pigeons that had taken over the inside, from the belly of the building to the rafters.

Their experience became the setting for one of the not-so-linear narrative threads in Grand Paris Texas, coinciding with interviews with town residents about their cinematic experiences, including the lasting impressions of Wim Wenders’s 1984 film Paris, TX (a film that was set in Paris but not actually filmed there), and a partially-erased copy of his film at the local video store. By also gesturing to two other seminal movies about the southwest, Bruce Beresford’s Tender Mercies (1983) and King Baggot’s classic silent film, Tumbleweeds (1925), Hubbard/Birchler address memory, loss, and the powerful lasting impressions of projection.

The unavoidable irony of Sound Speed Marker is that Hubbard/Birchler’s interest in the traces of filmmaking inevitably leads them to make marks of their own. The projection here is that the reality and illusions that come with the territory is a story that takes great care to tell.