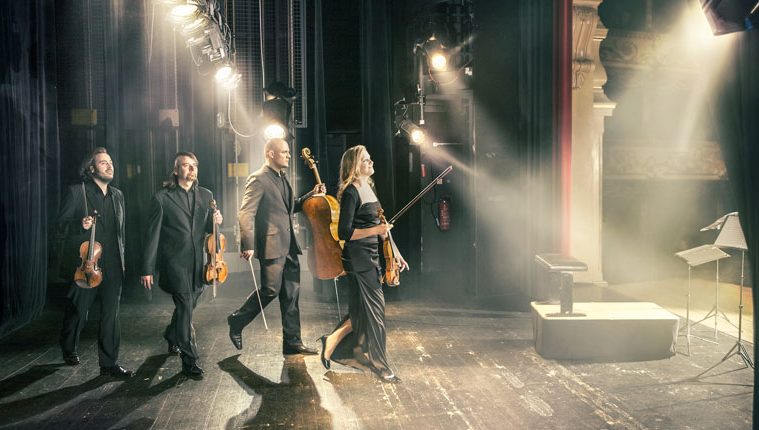 Anatomy of a String Quartet

Playing in a string quartet is probably about as difficult as performing neurosurgery. When you consider that there are four individual artists, four very different instruments and 16 different strings, the idea that all of those various forces could come together as a unified ensemble is actually a bit ludicrous.

With both the Artemis and Ébène Quartets heading to Houston via Houston Friends of Chamber Music, and the high visibility of the Enso Quartet in Houston’s musical scene, it’s worth taking a closer look at these unique ensembles, which have been  variously described as marriages, families or little societies unto themselves.

“Inside any quartet you also have four trios and six duets,” says cellist Raphael Merlin, of the Ébène, as he refers to the intricate inner musical relationships for which the musicians are also responsible. In addition to all of these inner relationships, there is also what is sometimes referred to as the “fifth voice.” That is the voice that arises when four individuals spend countless hours over the course of many years working in order to disappear themselves and their individual artistic personalities in honor of achieving a blended and unified ensemble.

“It’s kind of disturbing sometimes to realize how close you are to your colleagues,” says Merlin, as he reflects on the fact that he spends more time with the other members of his quartet than he does with his own family.

The first years of any quartet’s life are often unsettled; a number of personnel changes may occur. “The birth of a quartet is often a somewhat turbulent time,” says Merlin. For Artemis, such changes have been a hallmark of its existence since the ensemble first got together in 1989. From that time until 1994, there were many changes before they landed on the formation which played together for 13 years. In 2007, there were two more personnel changes, with a third and forth change shortly thereafter

Cellist Eckhart Runge is the thread that unites this rotating cast of musicians. “I’m like the last of the Mohicans,” he quips as he shares the intricacies of his ensemble’s family tree. And despite this multitude of personnel changes, Runge insists that the spirit of the quartet has not fundamentally changed since he first started with the ensemble back in 1989. “For me,” Runge says, “this spirit is always to play with everything or nothing.”

In the beginning, any string quartet has to give it everything they have. Many of the best ensembles are ones that got together initially while in school. This is almost a prerequisite for success, as one important aspect of quartet’s development is the ability to spend as much time rehearsing together as possible.

“It was nearly a full-time job before it became our real job,” says Merlin as he describes the period when his ensemble would spend entire days together rehearsing. It’s important for an ensemble to spend this kind of time together initially, given that once they begin to concertize, their schedules fill up quickly. Most quartets play at least one hundred concerts per year in addition to teaching and coaching. All of this is, of course, in addition to their personal lives.

In the case of the Enso, three of the four members have recently married; and for the Ébène, three are new fathers. “It’s sort of like a microcosm of the world,” says Enso cellist Richard Belcher. “You have to learn to live together.”

Mentorship is something that is very important for a string quartet, both in the beginning and beyond. Surprisingly, although each of the quartets I spoke with has long since reached the working stage of their career, they still have at least one person who they consider a chief mentor.

“I think the biggest danger in a string quartet’s life is that you end up cooking in your own soup. It’s good to have an outer view,” says Runge as he refers to the relationship between his ensemble and its current mentor, the great pianist Alfred Brendel.

Contrary to popular and prejudicial stereotypes, string quartet music is not a genre that is limited to the most educated and wealthy class. It is true that many composers, like Mozart, Beethoven, Bartok and Shostakovich wrote some of their best music for string quartets and it is perhaps because of that that the music is so immediately accessible. Ensembles like the Ébène and Enso also regularly make it a point to take their music into bars, pubs and warehouses as they navigate a musical landscape that includes everything from jazz to contemporary mix-media and electronica.

The Artemis Quartet has taken a more traditional path, but Runge insists you don’t need to know anything about what he does to enjoy listening. Runge sums up the power of 16 strings poetically: “The beauty of string quartet music is so immediate, and the communicative aspect of four people playing together without a conductor can transport so much immediate emotion, that basically anyone can come to listen to a string quartet concert and enjoy it.”

-CHRIS JOHNSON
Chris Johnson is a radio host and producer, a violinist and a 2008 fellow of the NEA Institute for Arts Journalism in Classical Music and Opera.