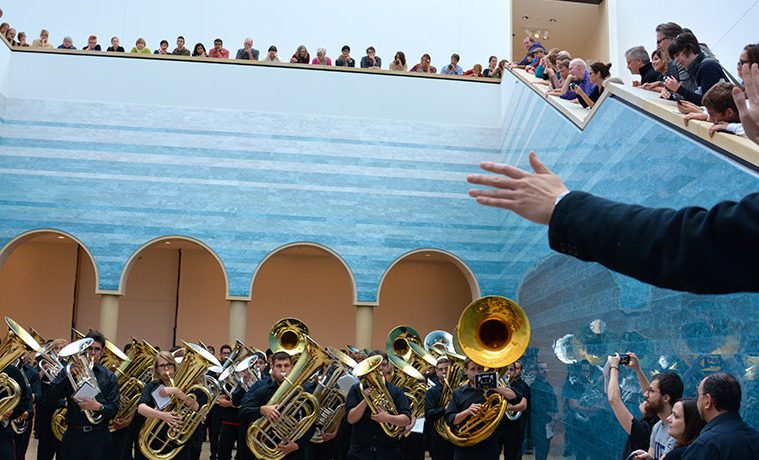 SoundSpace Succeeds at The Blanton

IMAGE ABOVE:   James Fei conducting 100 tubists from across Texas as they perform Anthony Braxton’s Composition No. 19 for 100 marching tubas. Photo by Kate Curry. 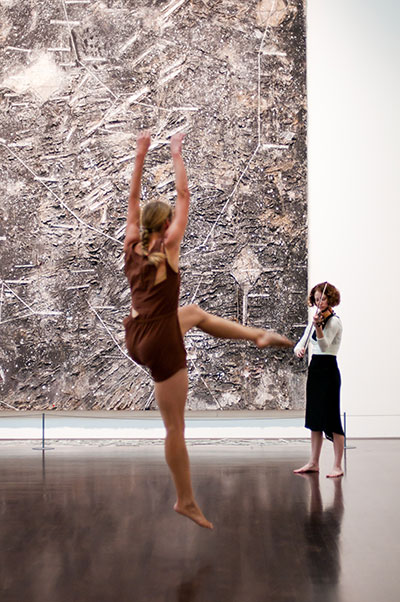 SoundSpace is a musical zoo held at the UT’s Blanton Museum of Art showcasing the myriad species of contemporary classical music. “Each SoundSpace features simultaneous, cross-disciplinary performances throughout the galleries of the museum,” said Steve Parker, artist-in-residence at the Blanton, chief programmer of the event, and one hell of a trombonist. You might have recently seen Parker as performer at the No Idea Festival.

According to Parker, previous SoundSpaces “have included the music of John Cage, works at the convergence of sound + movement, theater, works that explore space and symmetry, and works of spectacle, like Henry Brant’s Orbits for 80 Trombones and Composition No. 19 by Anthony Braxton for 100 marching tubas.”

Each SoundSpace “explores a particular facet or scope,” according to Parker. “Determining the scope of the program is an involved process, and often a function of the works on display in the museum, the artists we are interested in presenting, and whatever the performers are interested in doing. Ultimately, it is a collaborative process between the museum, curators, performers, and myself.”

I went to the most recent SoundSpace with a group of friends; however, the nature of the event invites dispersion. Despite our best efforts, we could not remain together, and there was no reason to do so. For those who haven’t been to a SoundSpace, picture yourself ambling through those oft ignored sections of the Blanton, ancient Roman pottery or Mannerist paintings, following the sound droning harmony. 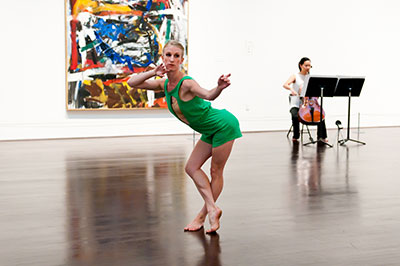 After a few wrong turns, you will find yourself in a cloud of bowed vibraphone, staring at an antiquated depiction of The Raising of Lazarus to the sound of Carolyn Shrake, Sarah Norris and Gannah Chou’s performance of the Brent Farris composition 30 Repetitions on a Decaying Pattern for harp, vibraphone and cello, respectively. 30 Repetitions is the kind of soft and patience demanding piece that is best heard facing away from the musicians. The space was octagonal and reverberated well. The baby crying down the hall was the soloist for those with generous ears.

On I ambled towards Steve Reich’s Pendulum Music perched on the balcony of the Atrium. Pendulum Music delivers the sort of intellectual musical satisfaction that leaves the listener craving something more Dionysian. So I ambled again, following the sound of thunder. I found my deliverance in the Schweitzer Gallery, where Mark McCoin and Max Bernstein sat opposite a deconstructed piano in their improvised piece Outlier. 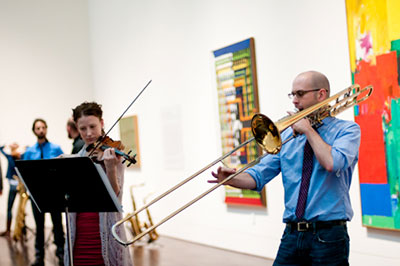 Different pieces of wood were clamped to the cast iron frame, which produced uniquely timbered percussion, everything that could be bowed was bowed, a rotating fan ran along the strings, a strange cylinder with protruding rods of varying lengths was shoved under the strings and the pair moved in perfect time all the while. The piece ended with a mutual-acknowledgement-of-a-job-well-done handshake under the approving gaze of a reproduction statue of Augustus Caesar who, if alive today, would have been applauding with the rest of us.

SoundSpace is also a venue for the budding new music composers of Spectrum, an ensemble from the University of Texas at San Antonio. I particularly enjoyed the percussion piece with various buckets and metal bowls. The piece utilized back beat rhythms of rock and roll music in ever changing permutations that never resolved quite where our pop-tuned ears wanted them to, providing a pleasurable discomfort of uncanny familiarity.

It is wonderful how well paired each performance was to the space. Each gallery has a distinct reverberative quality. During the previous SoundSpace, held in honor of John Cage’s 100th birthday, the incredibly voluminous atrium housed the smallest of toy pianos to humorous effect. 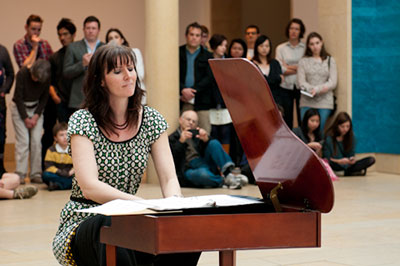 In regards to choosing spaces, “there a number of factors that are considered for each program,” said Parker. “Sometimes there is an abstract or literal connection between the works in the museums and the live performance. Other times there are interesting architectural or acoustic considerations that motivate our choices. Above all, the museum is a rich and inspiring space on a number of levels for programming.”

With so much going on at once, Parker is a busy man. Immediately after conducting Spectrum’s performance of Fabian Beltran’s Diablerie: Pagan Rites and Tribal Dances, he turned and ran through the crowd of applauding onlookers to go attend to what must have been very important business. I would like to imagine Parker running off to attend to new music emergencies. Perhaps John Zorn’s Cobra turned violent and the audience wasn’t sure if intervening would disrupt the sanctity of the piece or maybe the elevator clarinetist had a claustrophobic panic attack.

Yet, despite all of the complicated scheduling and programing, the event went off without a hitch. It was refreshing to see families walking about and exposing their children to new music. In fact, SoundSpace is so well appreciated that it is expanding to three events a year. The theme of the next SoundSpace is yet to be determined, but we are all ears to whatever Parker decides to throw together.