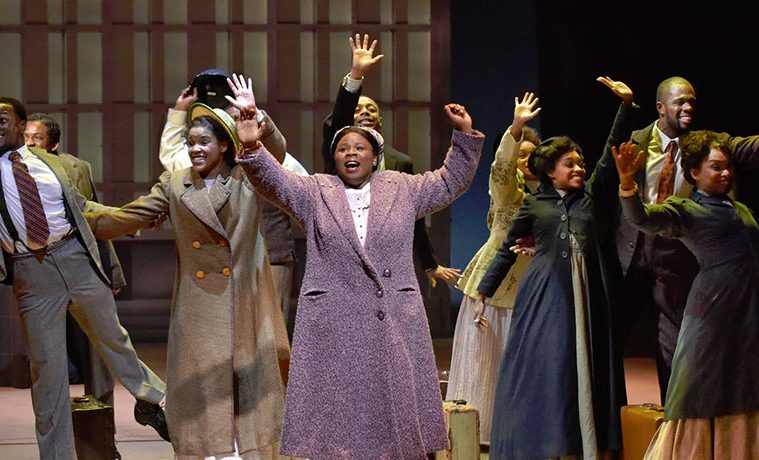 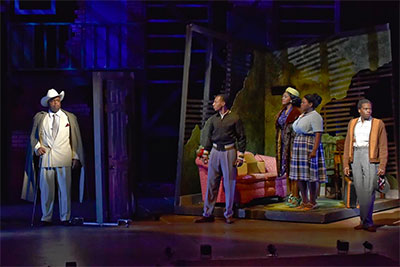 It’s been a week since I saw Stagger Lee, and the show still haunts me. That’s a good thing for an untested new show, especially a big, bold and brash musical now having its world premiere at Dallas Theater Center. Written by playwright-in-residence Will Power, Stagger Lee is not without its problems, but it also shows great promise to develop into a something greater.

The legend of Stagger Lee is one of the most important and enduring stories from American folklore, a symbol of resistance and freedom to African-Americans. He was an admired figure whose legend revolved around his badness, a hulking presence with violent tendencies which put him above the white man’s law, and allowed him to pass freely through the racial boundaries. The story of Stagger Lee shooting Billy Lyons has been spun into musical memories by such great recording artists as Wilson Picket, Taj Mahal, Woody Guthrie, and Bob Dylan. It’s a story that has captured the imagination of the world for well over 100 years. 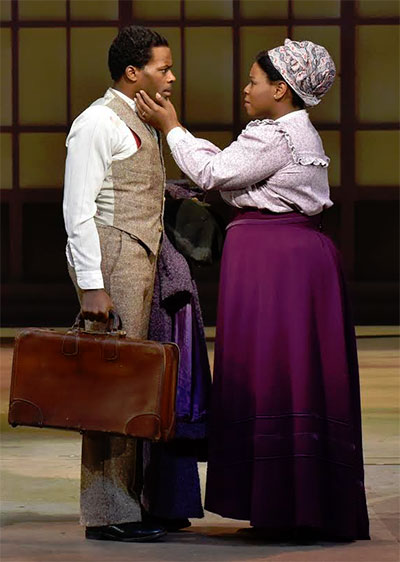 Power mixes several tales interwoven to try and create a unified story of sacrifice and determination to achieve the American Dream. Featuring an all-black cast of 21 players (some of whom play white characters at times during the production), the plot centers on two couples; Billy, forever an optimist who moves his wife Delilah from city to city in hopes of finding a better place to raise his family; and Johnny, Delilah’s philandering brother, and his put-upon wife Frankie. All of them have a connection to Billy’s best friend, Stagger Lee, whose interludes with the couples cause tension and heartache.

It’s a very ambitious story that explores racism and the African-American plight in America across many time periods, and the plot unfolds mostly in song, with movement and dance a vital part of the storytelling. But don’t go in expecting big-scale production numbers. This is a drama that follows an almost consistent rhythm and beat, with solid lyrics by Power, who also did the music with Grammy Award- winner Justin Ellington.

So while credit can be given for scope and originality, Stagger Lee still needs polishing. The script falls short on characterization (most especially Johnny and Frankie) and the storytelling is a bit disjointed as it jumps across various time periods (yet the actors never age.) The first act is almost too enthralling, zipping along to the sweet and low of jazz and blues; while the second act loses some energy after opening with a dynamic Sixties number that is one of the show’s highlights. The show lumbers towards the end when the script could be poetic given the weight and importance of the story. 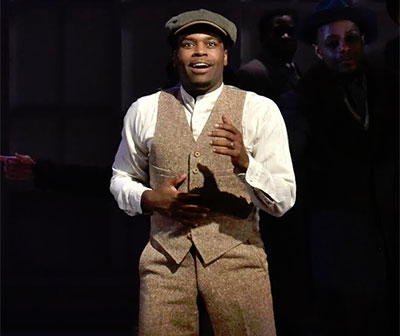 Those distractions are almost overcome by a top-notch cast. Cedric Neal returns to his hometown of Dallas after time away appearing in the Tony Award-winning The Gershwin’s Porgy and Bess and the Tony-nominated After Midnight to give a sizzling performance as Billy. His vocals sparkle–first with lilting exuberance, later with burnt desire—and his acting shows the confidence in the script. Fort Worth native (and now New York resident) Tiffany Mann does equally impressive work as Delilah, the woman who desperately wants to support her husband but fears the worse. Together, Neal and Mann have stage chemistry that almost upstages the story. As Stagger Lee, J. Bernard Calloway embodies a sense of pride and rebellion that adds mystery to his mean-spirited actions. Was he a badass by nature or did society make the man? Power doesn’t answer the question, instead cleverly letting the audiences decide if it takes the actions of violence to validate a culture, or imprison it. It’s a thought that lingers long after the curtain falls.

On the technically side, set designer John Arnone does fabulous work in filling the Wyly stage with color, texture and a vivid sense of place. And director Patricia McGregor keeps the actors moving and allows some space for poignancy in a show that often bounces, struts, jives and jams to a toe-tapping house band, led by music director Rick Fox.

Power has been working on Stagger Lee for several years, and his bold strokes are to be admired. This first production at DTC shimmers with promise of something greater; a play that could both entertains while also sparking a greater understanding of the black experience in American culture. Not many new works these days are this close to being hauntingly profound.