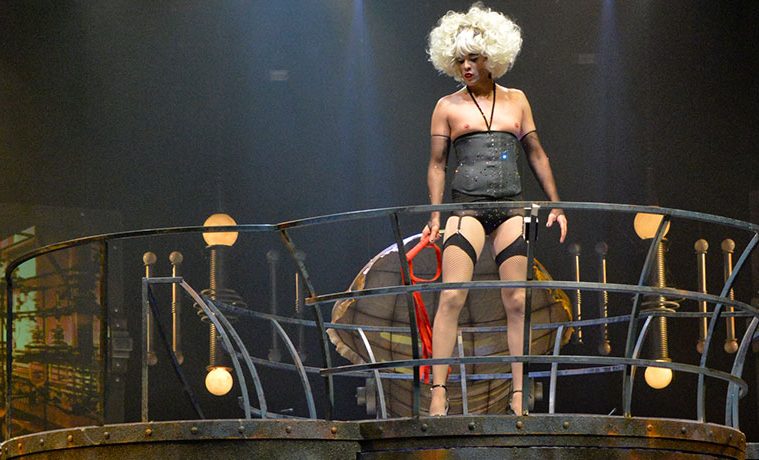 Starting the Season with a Party

IMAGE ABOVE: The cast of DTC’s The Rocky Horror Show. Photo by Karen Almond.

The Rocky Horror Show at DTC 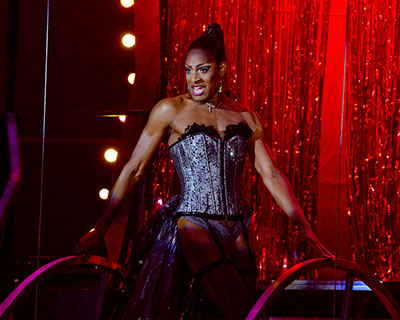 You can’t fault Dallas Theater Center for wanting to start their new season with some wild and crazy fun. Coming off the electrifying summer mounting of the classic musical Les Miserables—one of DTC’s biggest hits in years—I guess some partying was in order.

Indeed, director Joel Ferrell’s new staging of The Rocky Horror Show, through Oct. 14, fills the bill, with its corny dialogue, campy performances and head-bobbing musical score. But no shame in dancing along to this send-up of B-movies from the 40s, 50s and the 60s, it’s all good clean fun, even when it’s trying so hard not to be.

Most people are familiar with the show’s cinematic cult classic, The Rocky Horror Picture Show, a film still shown nationwide at the midnight hour in theaters where audience participation has elevated the cheesy story to riotous fun. But Rocky Horror began its remarkable life in the early 1970s not as a film, but as a small rag-tag production in London that author Richard O’Brien wrote to keep occupied when he wasn’t working as an actor. The play was a smash with audiences as soon as the curtain went up, eventually transferring from a 60-seat house to a West End theatre able to seat sell-out crowds of nearly 400. 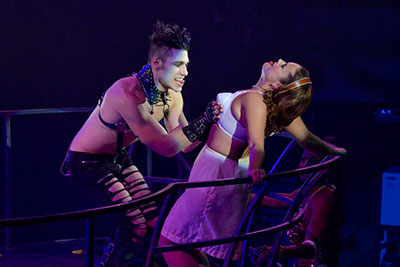 The plot is a kinky re-imagining of the Frankenstein legend. Our star, transvestite Frank-N-Furter, exists in a world where everything pretends it is something else, and in which the present is pasted together from the bits and pieces of movies past, so that life becomes an endless vaudeville revue. Of course, all this had a lot more shock value when America first encountered it in 1975. At the time, the counterculture of anti-materialism, free love and recreational drugs was just turning into the new culture of simula. Soon Hollywood came knocking.

The movie received very limited release in the US, but word-of-mouth turned a box office yawner into a late night movie experience, as audiences soon started attending showings dressed as the characters, and adding an overlapping dialogue with constant call-outs to the screen. It’s the audience-participation version that rocks the DTC stage. 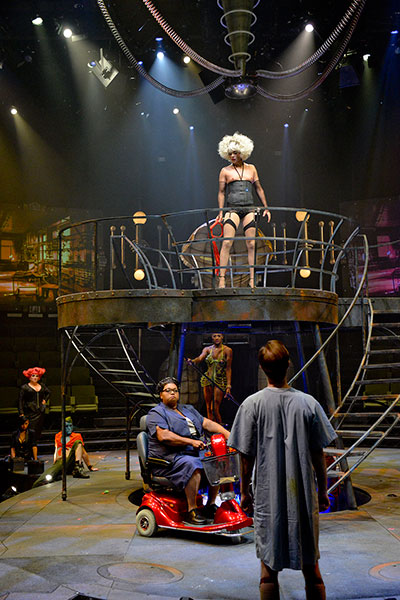 The cast of DTC’s The Rocky Horror Show.
Photo by Karen Almond.

We are introduced to straight-laced, All-American, Denton couple Brad Majors (Alex Organ) and his high-school sweetheart Janet Weiss (an excellent Morgan Mabry Mason). Brad is an all-around nerd, and is greeted by audiences yelling out “asshole.” Janet is an annoying prude, often greeted with shouts as “slut.” At the wedding of two friends, Brad proposes to Janet. Because they are both a couple of squares, their idea of celebrating is to visit their old science professor, Dr. Everrett Scott (Liz Mikel).

They are greeted by the hunchbacked manservant Riff-Raff (the always on target Chamblee Ferguson) and the maid, his sister/lover Magenta (Julie Johnson). As it turns out, the castle is hosting a motley transgender crew of visiting Phantoms, and everyone is in party mode, except for the new arrivals. As Frank (Dan Domenech) explains to Asshole & Slut, he has discovered the secret of life, and has created the perfect man in Rocky (an appealing Justin Labosco). However, rather than doing so out of a twisted God-complex, Frank is out to satisfy his insatiable sex-drive. Soon he is also seducing his virginal guests. 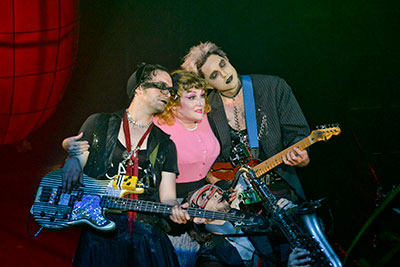 Ferrell stages the mayhem as an arena show, almost in carnival-like atmosphere, with the jamming Austin-based rock band Foe Destroyer center stage, and engaged with the vividly costumed actors playing around them. The music blares, people dance, the audience shouts and throws stuff on stage, and the plot spins ever so loopy with simulated sex scenes and off-stage killings. But what may have been edgy in incarnation is now just a reason to do sing along to the “Time Warp” or any number of memorable tunes that grace the show. It’s sexual politics aside, it’s a romp of a costume party.

One caveat to Ferrell’s production is an obtrusive staircase platform that rises center stage and blocks some of the live action. Thankfully, large video screens project what is happening on stage (an wink and a nod to the play’s most success as a film). Costumes by Wade Laboissonniere are predictable over the top, but oh-so clever and fun, especially the alien outfits trotted out near the end of the proceedings. 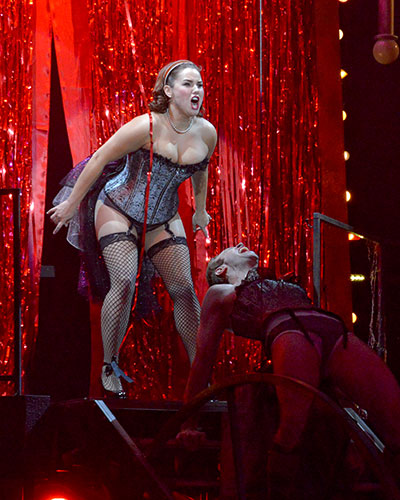 All in all, a fun time of warped debauchery at Dallas Theater Center in a show that thrives on strong voice talent, driving energy, and teasing sexuality. Go ahead, give yourself over to pleasure.