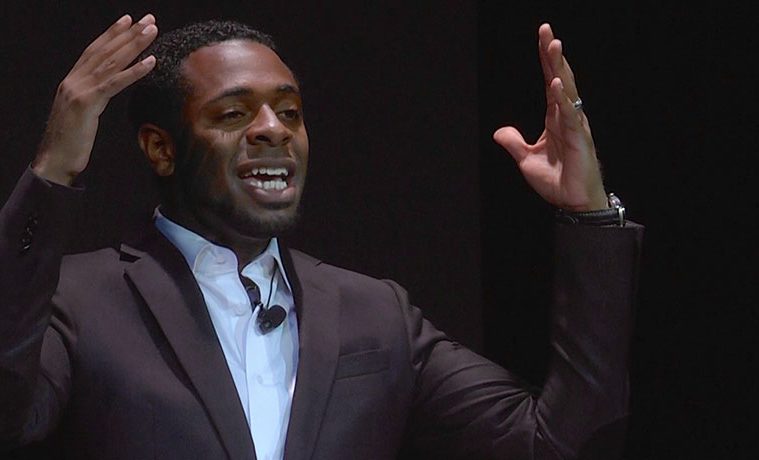 IMAGE ABOVE: As part of Oral Fixation, Byron Sanders shares the daddy’s view of childbirth for “Best of Season 3” at WaterTower Theatre. Photo courtesy of Oral Fixation. 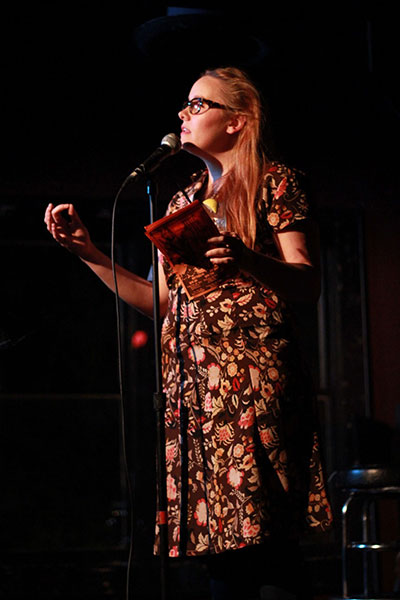 The last decade has brought with it the surprising resurgence of public storytelling as a popular means of expression. George Dawes Green tapped into what would become the zeitgeist rather early, in 1997 to be exact, when he founded the Moth in New York City. Since its inception, the Moth’s storytelling show has expanded to dozens of cities throughout the world and spawned a radio show and podcast, broadcast on over 200 public radio stations. Here in Texas, we’re just touching the tip of the storytelling machine. The rapidly growing popularity of Houston’s Bootown and Dallas’ Oral Fixation further attest to the medium’s relevance, and its unique position in the art world, which explains a lot about how we interact with art in the 21st century.

“There are a lot of things about traditional theater that I like, and there are a lot of things I don’t like,” Emily Hynds, one of the founders of Houston’s Bootown, is not hesitant to say. Hynds, and co-artistic director Lindsay Burleson, are the poster children for the 21st Century’s penchant for artistic experimentation.  They echo the frustration of many performing arts companies in recent years, and are all too aware of the bad rap theater companies have been getting, whether due to an ‘insider’ feel, a sterile environment or lack of engagement. Hynds and Burleson are doing everything they can to fight back.

Both credit Bootown’s biggest hit, Grown-up Storytime’s (GUST), success to its non-traditional venue, which gives it an open, casual, community-oriented feel. The series’ longevity (they’ll surpass 70 shows by the end the year) is a testament to its viability.

GUST has grown and grown since Hynds and company launched the series in 2007. It’s now a monthly event with two showings per night to accommodate the crowds. During the evening, which takes place on the third Tuesday at 8 and 10pm at Rudyard’s, a much-loved neighborhood pub, actors—both amateur and professional—stand up to read someone else’s crowd-sourced story, a different take on storytelling models like The Moth. When asked why, Hynds and Burleson say it’s simply so everyone will feel comfortable. 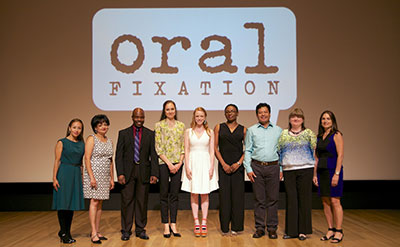 In Dallas, Nicole Stewart, a former theater student just like Hynds and Burleson, founded Oral Fixation on a very traditional model. Launched in 2010, Oral Fixation crowd-sources stories just like Bootown, but the story’s owners perform their own pieces. In just four seasons, Stewart has seen her series flourish as well, prompting an invitation from the AT&T Performing Arts Center to set up shop at their Wyly Theatre, where Stewart will launch the fifth season of Oral Fixation on Oct. 28.

Hynds, Burleson and Stewart have all seen first-hand the relevance of storytelling as an artistic medium. Stewart could talk for days about the power of storytelling, which she believes has a huge advantage over theater, a sentiment the three share without any disrespect towards more traditional methods of performance. Storytelling is accessible and participatory. “You can really pull in a community,” says Burleson, in a way theater never can.

Stewart experienced the power of storytelling as catharsis first-hand. A story she told in the third season of Oral Fixation about her own struggle with pregnancy and an abortion prompted an outpouring of support from her community, encouraging her “to make gutsier programming decisions.”

Oral Fixation shows each have a theme, which Stewart determines before the season. Part of participating in Oral Fixation also involves a three-week editing process, managed by Stewart, in which she coaches potential storytellers on both the acting and editing process. “I’m like a therapist,” she laughs. When it’s time for storytellers to take the stage, Stewart has more or less ensured they will have a fabulous story to tell.

Hynds and Burleson take a different approach. The stories they receive are more or less in their final form, but they still think of themselves as curators, having learned the hard way to “treat our audience as a living, breathing entity.” 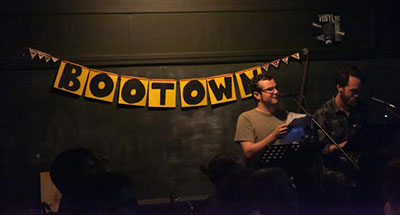 They may be different in approach, venue, and process, but Bootown and Oral Fixation both occupy a similar position in the performance world. Their companies aren’t quite theater, improv or poetry slam; storytelling exists somewhere in the middle, and that’s why it works. “I believe there has to be innovation in any art form for it to survive,” says Hynds. Innovation yes, but also the acknowledgment that there is a large segment of the population that needs to be brought back into the artistic fold, and for Bootown, setting up shop in untraditional venues is one way to reach them.

In recent years, Burleson and Hynds have branched out even farther, developing new concepts that allow them to explore their unique interests; shadow puppetry and Benshi storytelling, a Japanese tradition, in which a live narrator narrates silent or foreign films for an audience. Neo-Benshi, Bootown’s newest monthly event, crowd-sources stories similar to GUST but these events consist of teams of people re-interpreting and narrating 4-6 minute clips of anything—literally anything—they want.

Back in Dallas, Stewart has expanded venues, with shows at Addison’s Watertower Theatre for the first time, and she now serves as a blogger for the Huffington Post, bringing unique social insight gleaned from several years of studying human nature. “We all have a false sense of intimacy with others,” Stewart says of her generation, “But being in a space with people who have earnestly excavated their lives breeds a new kind of intimacy.”