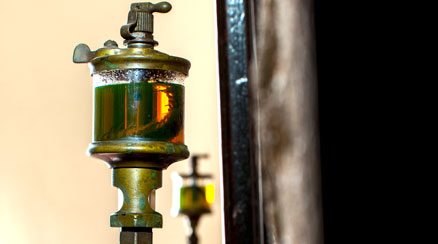 Steve Brudniak: The Science of Surrealism

Comte de Lautréamont was a 19th-century poet whose famously cryptic line – “beautiful as the chance encounter of a sewing machine and an umbrella on a dissecting table” – was adopted as one of Surrealism’s aesthetic credos. Nearly sixty years later, André Breton, one of the founders of Surrealism, would similarly define surrealist art as “the juxtaposition of two more or less disparate realities.” Likewise conjoining seemingly incongruous themes and forms, Steve Brudniak’s work references the physical and the psychological, the spiritual and the scientific, the outdated and the innovative, the natural and the technological.

In his assemblages, – currently on view in his exhibition at Avis Frank Gallery titled The Science of Surrealism – organic specimens such as octopus tentacles and human blood coexist with found objects such as a discarded table from a chemistry classroom, figurines of Buddha and Lakshmi, and scientific materials including lasers, fiber optics, magnetic ferro-fluid, and gyroscopes. Comprised of works spanning almost thirty years of the artist’s career, the exhibition is akin to a modern-day cabinet of curiosities or a retro-futuristic steampunk world.

In addition to combining a wide range of materials, nearly all the works in the show implicate the viewer. Take, for instance, the two assemblages in the gallery’s entryway – Zeitgeist (1996) and The Vagus Leviathan (2008). Zeitgeist incorporates a wooden frame, cast bronze, and a rusted door from an antique 35mm film projector. Viewers must open this outer door and then another to reveal a mummified squirrel laid to rest on a cushion of velvet.

In The Vagus Leviathan, it is only after leaning in and staring at the central lens that one sees an image of a face pulsing in and out of view. The lengthy wall texts that accompany each piece invite, even demand, participation, suggesting that the work is not fully realized until viewers open a door, press a button, or, in the case of Model for a Tumultuous Subconscious (1993), lift and drop a vibrating hubcap to see what happens.

Although encouraged to engage with Brudniak’s work, viewers are often repelled when they do. This is nowhere more apparent than in Ulteriaphobia (1994), made of concrete, bronze, and, perhaps gratuitously, “once-poisonous” centipedes floating in coolant. Ulteriaphobia is literally hands-on; Brudniak prompts viewers to kneel in front of his altar-like assemblage and place their palms on a pair of bronze handprints in the center of the work. However, once this connection is made, a nerve stimulator shocks viewers with a low-voltage current, causing them to instinctually draw their hands away.

Brudniak’s assemblages are impressively constructed and engaging. But ultimately, he offers a surrealism that is more about form than content, revealing little of the forces that Breton’s Surrealists believed were hidden beneath the surface of reality. Regardless of his deft juxtapositions, Brudniak’s work emphasizes disconnection and his “disparate realities” remain just that, rather than expressing something new.

–KATIA ZAVISTOVSKI
Katia Zavistovski is a PhD candidate at Rice University and the William A. Camfield Curatorial Fellow at the Museum of Fine Arts, Houston.