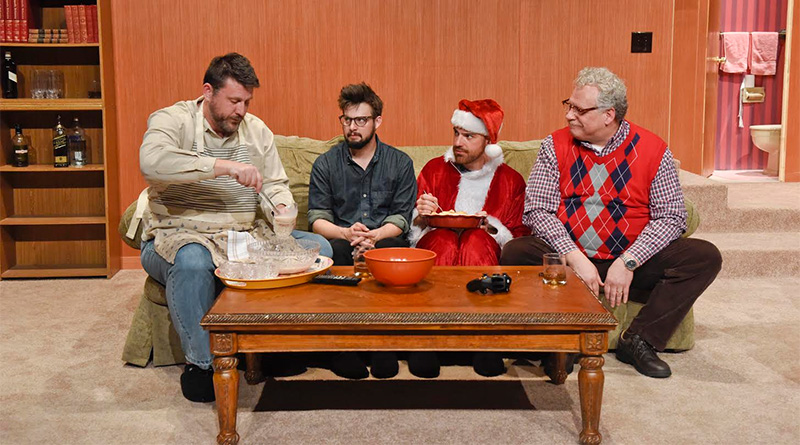 The premise of Young Jean Lee’s Straight White Men, a play currently having its area premiere at Second Thought Theatre, can be neatly summed up like this: in the 21st century, its complicated to be a straight white man.

It’s to Lee’s credit that she manages to critique the privileged predicament of adult white men at the same time as she illustrates their psychological hang-ups with sympathy.

In typical American theater fashion, Straight White Men, which runs through May 6, tells the ill-fated story of a mini family reunion. It takes up the story of Jake, Matt, and Drew three, yes, straight white men, who have returned home to spend Christmas with their widowed father. If the diverse cast of “people in charge” who welcome the audience into the theater with pussy-proud female hip-hop blasting from the speakers didn’t give it away, this is a show about whiteness. It’s also a contemporary update on the million and one family dramas which throw families together into a house or otherwise claustrophobia-inducing situation after a great deal of time apart and watch as the closeness prompts them to implode

Jake (Brandon Potter) is a successful banker with an ex-wife and kids he spent some time with before making the trip home. Drew (Drew Wall) is a city-dwelling, award-winning writer, and Matt (Thomas Ward) is a highly-educated, according to his family brilliant, temp worker who currently lives at home with Dad (Bradley Campbell) and it is this living at home and “not fulfilling your potential” that causes so much tension this holiday season.

Under the direction of Christie Vela, Potter and Wall play their characters like the stereotypical man-children we’re used to hearing about in 2017, all exaggerated machismo and hyper-masculine banter, but an early game of “Privilege,” a socially conscious version of Monopoly the boys late mother invented as a way to ensure they were always aware of, and grateful for, their privilege, reveals that this is a very progressive group of straight white men: they’re aware of the rampant social inequality and feel their fair share of white guilt. After Matt has an emotional breakdown over Chinese takeout, the interaction between Drew and Jake as they wrestle with emotions straight white men have historically been told to suppress, plays out like a game of who is the most enlightened.

Jake and Drew spend the second half of the play engaged in a mini-war as they share their own opinions concerning what is wrong with Matt: Is he punishing himself for being white? Does he need therapy? And it’s to the credit of everyone on stage that the audience is never sure if anyone is being truly honest, or if they’re just playing a part which society has recommended or forced upon them.

Does Matt really want to be at home? Are his siblings and father being unfair? Is there a nobility in getting out of the way?

Lee’s play can come across a bit obtuse, and the occasionally over-exaggerated performances in Second Thought’s production don’t offer clarity to the complex societal personas being tackled onstage (if you’re late to the world of identity politics in 2017 you’ll be very, very lost), but it’s rare to see a story about this, the first generation of white men who have grown up plagued by these questions of identity (something women and people of color have been struggling with for, well, forever), and for that reason it’s refreshing, plus, it’s extremely difficult to write about issues we’re just beginning to learn how to deal with, so kudos to Lee for making the effort. If nothing else you’ll undoubtedly walk away from Straight White Men with a more nuanced perspective on the newly, and probably thankfully, complicated world of being a white male in 2017.