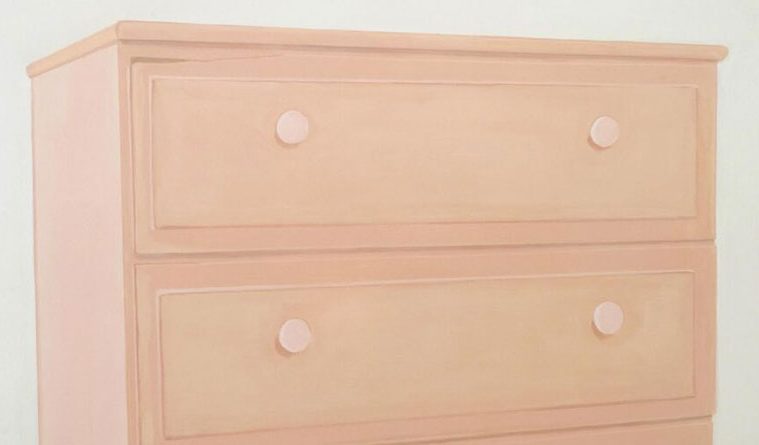 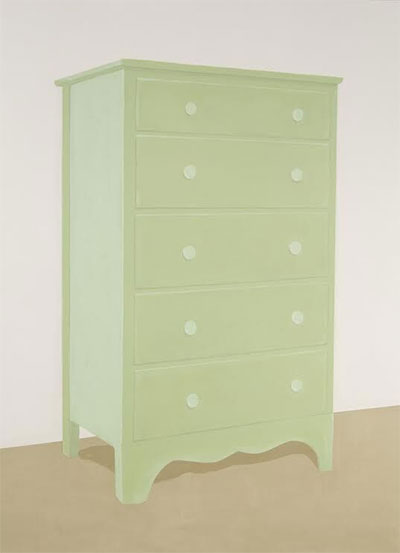 Galveston is a strange place in the autumn. “Pleasure pier” silenced and hotels emptied of tourists, the ocean pitches gray under a similarly hued sky.  A town so obviously emptied out, replete with the unending low-level soundtrack of crashing surf sets the perfect mood for viewing the retrospective of Francesca Fuchs’ last eleven years of work, now on view at the Galveston Art Center.  Fuchs’ paintings, like the oblivious and silver-lit ocean, suggest things eternal, albeit through the guise of the banal.

Fuchs’ combination of a palette restricted to the palest extremes and massively blown-up images creates a strong sense of memory without the slightest hint of nostalgia.  Her subtle tints remove us from the immediacy of a world where shadows ground us to a specific time of day, and focus our attention instead on the eternity that can be contained in a single moment.  She reminds us that such moments can occur with heartbreaking force both in the observation of a simple piece of furniture, as in 2006’s Green Dresser, or when studying the flawless whorls of a baby’s ear at its mother’s breast in 2005’s Baby 1.

These paintings, by virtue of their scale alone, are an exhortation to look at intensely personal moments.  In Hospitalized Woman (Charlotte), Fuchs positions us above the frail patient, floating like a disembodied spirit.  In the Baby paintings, she puts us within the skin of the aforementioned breastfeeding mother.  But her execution is painstakingly precise.  There is no layering or underpainting, only the kind of spareness earned by a well-versed painter.  Marlene Dumas’ thinly realized faces and babies spring to mind, but Fuchs’ work is light-filled where Dumas’ figures are distorted, alien. 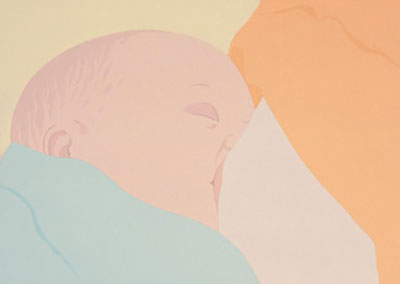 The white noise of memory is present in Fuchs’ “framed paintings” series, which are displayed salon style on the farthest wall of the GAC as a counterpoint to the larger, domestic-themed works.  These works reveal a humor not evident (but also not required of) the larger paintings.  They are rendered with Fuchs’ characteristic light touch although she has brought many art historical “big shots” to the party, both contemporary and historical.  Like the humble green dresser, these paintings-of-paintings have the blown-out quality of an image that is seemingly burned on one’s retina, although they lack the gut-punch of the larger domestic images.  Their “frames,” which are painted into the composition, separate us further rather than sucking us into her experience.

Admittedly, the abandoned off-season beach town of Galveston was not a likely consideration as Fuchs painted these canvases. This show is a careful curation of work created by the Houston-based artist, and thankfully, there’s nothing “beachy” about it.  The GAC itself, which has just reoccupied its previous building after several years of renovation following significant storm damage, is a clean, stately structure that provides an almost reverential exhibition space.  Both serve the work well. For Fuchs’ paintings, which are both expanding and expansive, you’ll need some time to resolve the physicality with the ether. Eternity can’t be absorbed quickly.