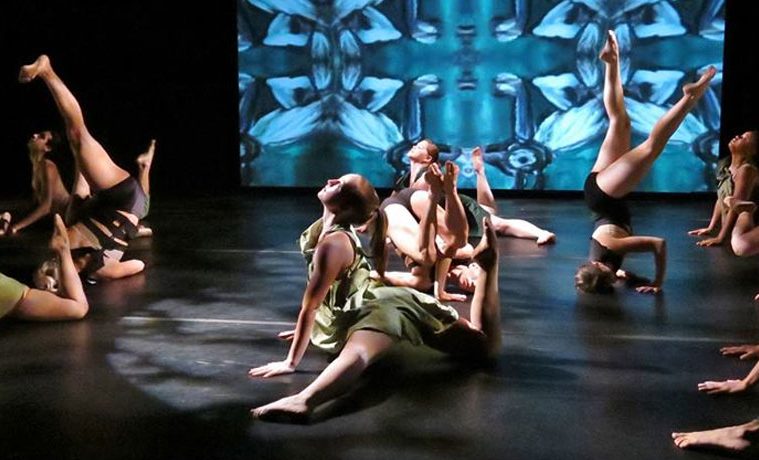 In what other season would you see sparkling fringe, bright pink hoop skirts, and male feet and svelte legs in point shoes skimming across the floor? What about feather collars, shirtless men, and repetitious leaping and tumbling across the stage? Certainly not spring— I’d say summer, if I had to wager my artist’s salary. Summer gives us space for risk and allowance for frivolity, and this spirit infused Freneticore’s version of the The Rite of Spring as part of a shared evening with Psophonia Dance Company. Artistic director Rebecca French retitled the work The Rite of Summer, adequate preparation for the show. 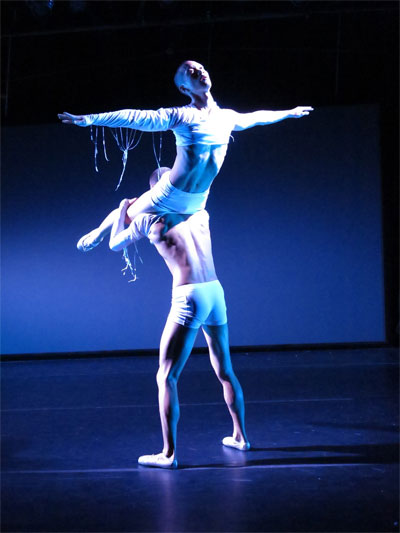 This year is the 100th year anniversary of The Rite of Spring, and we’ve been fortunate to use this celebration as an excuse to revisit the avant garde treasure of choreographer Vaslav Nijinsky and composer Igor Stravinsky. Premiered to negative reviews and responses including riots from the audiences in 1913, it’s clear to see that as an audience, we’ve evolved enough to savor The Rite of Spring’s dissonance, sensuality, and experimental atonality. We’ve been reminiscing and even flocking to restagings of versions created after Nijinsky by revered choreographers including Pina Bausch, Martha Graham, Maurice Béjart, and many others. Some are more closely interpreted to the original, and others, like The Rite of Summer, take courageous diversions from both Nijinsky and Stravinsky.

One diversion taken by choreographer Rebecca French was in the non-linear structure of The Rite of Summer. French designed the visuals as a series of scenes. The costume changes punctuated these episodes, as well as the music, which was either altered or not altered depending on the scene. The opening felt the most familiar with the power and mystery of Stravinsky’s music made visible by a large cast of 12 on the stage, feet and legs in the air rotated inward, a Nijinsky motif. Large white fabric entered downstage right and we saw a shadowy body reminding us of Rudolph Nureyev in L’apres-midi d’un Faune which Nijinsky originally performed. The white sheet left too soon and we were moved on. With a cast of twelve physically dedicated performers, the stage looked small as their bodies jumped, pounded, and charged across the stage.

Each scene had a particular identity—some defined by a prop like parallel bars with splits and flips to awe, others were defined by a costume such as a small crowd of women wearing bubblegum pink hoop skirts, and still others were more deeply defined by tone like a sensual and anticipatory duet between two men, Shohei Iwahama and Ruben Trevino, in pointe shoes. Each idea held potential, but before deeper investigation of the prop/scene/costume/relationship, the idea was reluctantly pulled into a new scene by the music. It appeared the choreography didn’t have space in the music to fully develop. Stravinsky’s musical structure certainly leads to choreographic compartmentalizing without time for transition.

Chris Becker (composer and musician) further accentuated this block structure by leaving portions of the original score by Stravinsky, but manipulating a significant allotment with sounds you may hear in your kitchen or back yard—clicking, chirping, and a house beat. Edgar Guajardo (light design) complemented the club sounds with strobe lighting.

Varina Rush (visual/projections artist) provided cleansing moments of slow motion with her visual projections of what appeared to be hieroglyphs, a palette of untouched blue and yellow paint, and a girl dressed in red swept up in a windstorm. Ashley Horn’s costumes were not only impressive in sheer quantity (over forty costumes) but in variety of design spanning from intricate bird-like petals, to beading, to fringe.

Performances by Iwahama and Horn were particularly sophisticated with a deep use of spiral and articulation of the torso. The cast overall was polished and invested. Rebecca French commanded the stage with an unequaled power.

Psophonia Dance Company opened the show with Infinite Shapes of Creatures, choreographed by Sophia L. Torres in collaboration with the cast. Eight dancers, flutist Adrienne Inglis and Shana Norton who played the clarach (a Scottish harp) investigated the relationship between hearing sound and creating sound. In contrast to the music’s airiness and melody, the staccato dancers moved from stillness to movement both independently and as a group. There was a strong use of counterbalance and full-bodied weight sharing. A solo by Stephanie Beall was particularly stunning with space-eating floor work and inversions so pure I felt like I was frozen in time.

–LYDIA HANCE
Lydia Hance is a choreographer, filmmaker, collaborator, and educator.  She founded and directs Frame Dance Productions, a contemporary dance company making collaborative works for the screen and stage.  She is also the Education Director of Hope Stone Inc. and facilitates Fieldwork in Houston.