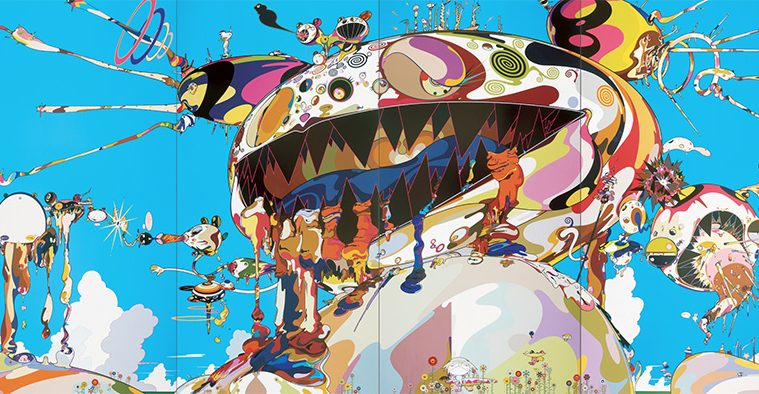 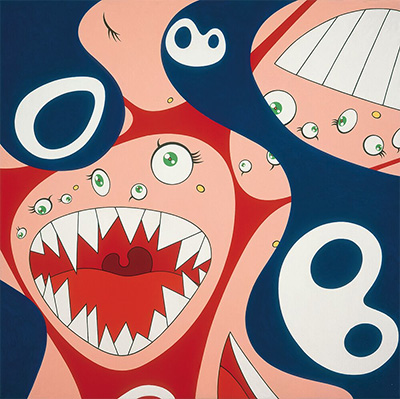 When we think of the images created by acclaimed Japanese contemporary artist Takashi Murakami, we perhaps can’t help but see visions in our heads of smiling daisies, sleepy-eyed mushrooms, menacing mouse-like creatures with very sharp teeth and cartoon bears vaguely reminiscent of Kanye West. The new exhibition at the Modern Art Museum of Fort Worth, Takashi Murakami: The Octopus Eats Its Own Leg, on view June 10 through Sept. 16, seeks to go beyond the familiar, anime-inspired images to explore the evolution of an artist producing vast, epic paintings while always remaining dedicated to his craft.

Containing over 50 works across three decades, the exhibition was originally organized by the Museum of Contemporary Art Chicago and curated by MCA chief curator Michael Darling, who set out to show a Murakami even fans and collectors might not immediately recognize.

“Personally I’m motivated by trying to correct perceived wisdom,” explained Darling during our recent conversation before the exhibition opened to the north Texas public. “I think that there’s this picture of Murakami as a guy who does these happy, poppy pictures. I’ve always thought there is more to him that. He’s more serious, more connected to history.”

While many contemporary art lovers might be familiar with Murakami’s bright character-driven images and Superflat style (a term he coined), which flattens both the distinctions between high and low culture and painterly composition, Darling hopes the exhibition will “show people a different side to Murakami than we think we know.”

While selecting and organizing the work, Darling primarily focused on Murakami’s paintings and arranged the Chicago exhibition chronologically to take viewers through Murakami’s artistic evolution, but to also highlight the connection between all the periods of his career, not just the more recognizable anime-like characters.

“Bookending one side of those are really early paintings that have rarely been shown before—especially outside of Japan—that were made when he was working on his PhD in Nihonga, a traditional Japanese painting style,” explained Darling, going on to describe how the exhibition also contains much more recent work—astonishingly detailed paintings populated by gnarled and wizened, Arhat figures, which are based on Buddhist monks of legend. 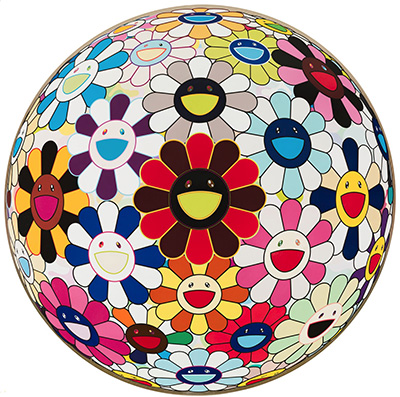 A large part of examining and appreciating the evolution of Murakami’s art means taking an expansive look at the creation, growth and change of his iconic characters, including his mouse alterego, Mr. DOB, the smiling flowers, mutating mushrooms and even Kanye Bear, the image representing an adolescent Kanye West, which came out of Murakami’s friendship and occasional collaboration with West.

But Octopus Eats Its Own Leg also gives Modern visitors a new perspective on Murakami with some of his most recent characters, including the octopus of the title, which was created just for this exhibition, and his recent Arhat paintings. Murakami has created a roster of 500 Arhat figures that he recycles and uses in different ways, recombines them and changing their features and clothing from painting to painting.

Though populating his paintings with so many characters might imply Murakami has great plotted stories to tell with his work, instead the art lures viewers in, inviting them to wander the great complexities of the images to find their own meaning.

“The storytelling part is usually very obscure in his work. He likes to be more inscrutable and abstract. He doesn’t allow us to make easy stories and easy assumptions about what he’s trying to say. He subverts storytelling in that way,” says Darling.

“He wants you to stand in front of that painting and keeping looking and looking, never get exhausted and never feel like you’ve finished with it. Having the content be ambiguous is analogous to how he wants your eyes to never stop moving around or settle.”

Andrea Karnes, senior curator at the Modern, explains that the organization of the exhibition in Fort Worth will also “give insight into the artist’s entire career, from his beginnings to present day.”

“For the Modern installation, we struck a balance between hanging the works chronologically and giving each work the right space to make it sing. We think the marriage of Mr. Murakami’s work with our Tadao Ando Building is incredible.”

Karnes also promises that Octopus will bring new works that Murakami created especially for the exhibition as well as some older, iconic works not seen in the Chicago show.

While viewing the work side by side, visitors to the Modern might observe that connection between past and most recent paintings, perhaps perceiving it as a flow of images while moving through the galleries, but Darling says that might not exactly reflect what’s going inside the art. 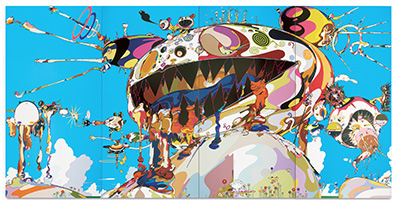 “There’s a battle going on in his work and in his head when he’s making these things. He can be quite tormented and struggles with where he is, being dissatisfied with what he’s making at the moment and wanting to push. He’s always looking for ways to keep fresh and energized.”

Octopus at the Modern will likely be the last chance to see such a large retrospective of Murakami’s work in one place. Between Chicago and Fort Worth, the exhibition made a stop at the Vancouver Art Gallery, and though Darling has had inquiries from other museums, three venues was all he could do to hold the works together.

“The paintings had become quite valuable, and they’re scattered around the world, and people really like to have their Murakamis. They don’t want to be without them for very long.”