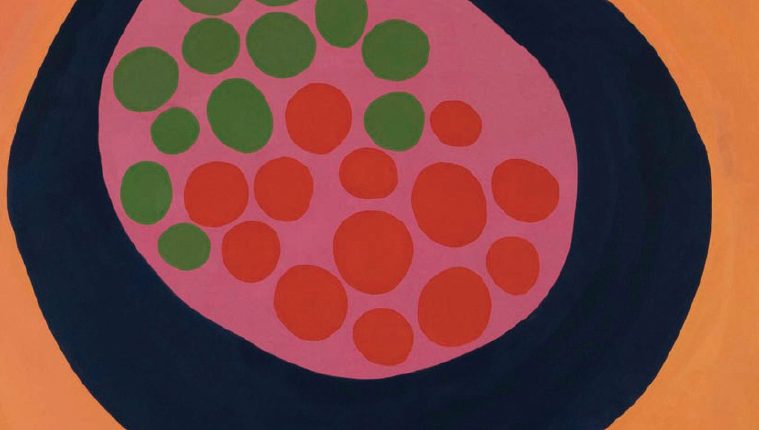 Jules Olitski, “Patutsky in Paradise,” 1966, will be on view at The museum of Fine arts, Houston begining February 12.

A statewide preview of some interesting new shows

The Modern Art Museum of Fort Worth is presenting the first comprehensive mid-career retrospective of Glenn Ligon, widely regarded as one of the most important and influential American artists to have emerged in the past two decades. Organized by the Whitney Museum of American Art and Whitney curator Scott Rothkopf, in close collaboration with the artist, the exhibition surveys 25 years of Ligon’s work, from his student days until the present. “Glenn Ligon: America” features roughly 100 works, including paintings, prints, photography, drawings, and sculptural installations, as well as striking recent neon reliefs. “The Modern is honored to host this major exhibition of one of the most important American artists working today,” said Andrea Karnes, curator at the museum. “This mid-career retrospective includes Ligon’s key works to date, and shows the development of his career in a way that is insightful and revealing.” Throughout his young career, Ligon has pursued an incisive exploration of American history, literature, and society in a body of work that builds critically on the legacies of modern painting, and more recently, conceptual art. A leading member of a generation of artists who came to the fore in the late 1980s and early 1990s by exploring racial and sexual identity in their work, Ligon is best known for his series of text-based paintings based on the writings of noted African American authors such as Zora Neale Hurston and Ralph Ellison, as well as Jean Genet, John Howard Griffin, and Mary Shelley, among others. These iconic black-and-white paintings-with their play between abstraction and legibility, light and dark, disembodied text and painterly physicality-signaled the arrival of a singular artistic vision that synthesized questions of identity with key concerns from recent art history, such as the role of appropriation and language in art.

Four masterworks by John Singer Sargent (1856–1925), the preeminent expatriate painter of the late 19th century, will be on exhibit for the first time in Texas beginning next month at Amon Carter Museum of American Art. Sargent’s legendary canvas “Fumée d’Ambre Gris” (Smoke of Ambergris) is among the four works in the exhibition. Created in 1880, this magnificent oil on canvas stands among the most remarkable of all the artist’s paintings, highly prized for its ambiguous narrative and exquisite color scheme of cream on white. The exhibition also includes “Portrait of Carolus-Duran” (1879), Sargent’s spirited portrait of his Parisian art instructor Carolus-Duran (1837–1917), as well two entrancing scenes from Sargent’s excursions to Italy, “A Venetian Interior” (1880–82) and “A Street in Venice” (1880–82). “All four paintings display an informality and unconventional lack of finish, forecasting Sargent’s emergence as a modern painter,” says Rebecca Lawton, curator of paintings and sculpture at the Amon Carter. “Together, they also offer profound insight into the development of Sargent’s singular talent between 1879 and 1882, before he reached the age of 30.” In 1910, Robert Sterling Clark — entrepreneur, soldier, explorer and an heir to the Singer sewing machine fortune — settled in Paris and began collecting works of art, an interest he inherited from his parents. When he married Francine Clary in 1919, she joined him in what became a shared, lifelong passion. The Clarks’ collection grew exponentially over the ensuing years. Following World War II, they worked to establish a public museum to house their holdings, and in 1955 the Sterling and Francine Clark Art Institute opened in Williamstown, Mass. The Clarks possessed a discerning eye for collecting, and many of the works they accumulated are today iconic.

To complement their exhibit “Youth and Beauty: Art of the American Twenties,” the Dallas Museum of Art presents “Texas in the Twenties,” an exhibition featuring images of Texas during the 1920s made by Texas artists. Gathering drawings, etchings, prints, and photographs loaned by local collections, the exhibition highlights scenes of Texas as well as the transitional time in Dallas history when it was on the verge of becoming one of our nation’s largest and most vibrant cities. Showcasing approximately 30 works by L. O. Griffith, Mary Anita Bonner, and Eugene Omar Goldbeck. Indiana native Louis Oscar (L. O.) Griffith moved to Dallas with his family as a child and studied art in St. Louis and Chicago in the early 1890s. He returned frequently to Dallas and developed a reputation for realistic paintings of the Texas landscape. In 1926 he executed a suite of nine drawings with corresponding etchings, which are featured in this exhibition, recording Dallas in the years leading up to the Great Depression. The award-winning Texas artist Mary Anita Bonner (1887–1935) grew up in San Antonio, where she observed ranch hands and cowboys who inspired many of her works. Eugene Omar Goldbeck was born in San Antonio in 1892 and became a photographer at a very early age. His photography captures sweeping views of cities, events, and Texas landscapes. Goldbeck is known for his panoramic photography, and Texas in the Twenties presents four of his photos, including Third Annual Bathing Girl Revue, Galveston, Texas. Dallas also gets interpreted by another artist in a new exhibit opening at the DMA on May 20, “Flower of the Prairie: George Grosz’s Impressions of Dallas, 1952.” George Grosz, the German expatriate artist, was invited to Dallas to produce a series of watercolor and oil paintings illustrating the landscape and society of Dallas. A group of these works was exhibited at the Dallas Museum of Fine Arts in the fall of 1952, but the entire series has never been shown together, until now.

“Richard Serra Drawing: A Retrospective” is the first retrospective of the artist’s drawings, as well as the first major one-person exhibition organized under the umbrella of the Menil Drawing Institute and Study Center. While Serra’s sculptures have been widely recognized and the subject of numerous museum exhibitions, his drawings, which have played a crucial role in his work for over forty years, have not received a critical overview. This exhibition, with work from major European and American public and private collections, traces Serra’s investigation of drawing as an activity both independent from and linked to his sculptural practice. Organized chronologically, it addresses significant shifts in concept, materials, and scale, and culminates with new large-scale works completed for this presentation. In the early 1970s Serra drew primarily with ink, charcoal, and lithographic crayon on paper. At first a means for the artist to explore form and perceptual relations between his sculpture and the viewer, the drawings eventually became autonomous works of art. They increased to human-scale, and bold forms created with black paintstick exploded the boundaries of the paper support. In the mid 1970s, Serra made the first of his monumentally-scaled Installation Drawings, the artist’s original version of the dialectic between radical scale and radical technique in an architectural context. Working on site, he attached Belgian linen directly to the wall. Paintstick, melted down and recast in large heavy blocks, was applied using repetitive and vigorous physical gestures. The resulting fields of black disrupt and complement existent spaces and began to occupy entire rooms towards the late 1970s. Within the last 25, Serra has continued to invent new drawing techniques, of which will also be on show at this Houston exhibit.

Drawing together more than 30 monumental canvases from public and private collections, “Revelation: Major Paintings by Jules Olitski’ profiles a major figure in 20th-century art, at the Museum of Fine Arts, Houston. Olitski (1922–2007) has long received international acclaim for his maverick “Color Field” paintings of the 1960s. However, the larger arc of his career remains to be fully appreciated — an opportunity addressed by Revelation. The exhibition examines five decades of creative endeavor, highlighting the series that define Olitski’s major advances: Stain paintings, Spray paintings, Baroque paintings, High Baroque paintings and concludes with the last great series, titled “With Love and Disregard.” “Jules Olitski can be regarded as one of America’s last classic modern painters,” said Alison de Lima Greene, curator of contemporary art and special projects at the MFAH. “Throughout his career he embraced new media and techniques, but he always balanced even his most radical experiments with an acute sense of the history of art. As he continued to push the limits of painting, he also looked back to Rembrandt and El Greco.” Among the paintings opening the exhibition, “Prince Patutszky Pleasures,” 1962, demonstrates Olitski’s assured command of Magna acrylic, a medium which allowed him to build his compositions through flat organic forms with vibrant color harmonies. In the years that followed he rapidly mastered the stain techniques allowed by acrylic paints and the open field of the raw canvas became a significant aspect of his work in the mid-1960s. At the same time, he formed strong alliances with Helen Frankenthaler, Kenneth Noland, and Anthony Caro, as well as the influential critic Clement Greenberg, who became one of Olitski’s most profound friends and chief advocates. The year 1966 saw both formal and professional breakthroughs in Olitski’s career. Aspiring to create a sense of weightless and suspended color, he began using a spray gun to apply pigment to his canvases. The resulting Spray paintings shimmer with radiant tones, assuming in the words of the artist “a new light, a new color.” Dedicated to continuing to test the limits of abstraction, Olitski moved away from spray techniques in the mid the early 1970s, reintroducing gesture and brushwork in such magisterial compositions as Rephahim Shade – 2, 1974. With the High Baroque paintings of the 1980s he built up the surfaces of his compositions with iridescent pigments, at times using mops, brooms, and mitts to apply paint. In the last decade of his life, Olitski created some of his most impassioned and haunting canvases.

Painter Théodore Gentilz, was born in Paris in 1819 but eventually made his way to Texas in the 1840s. Despite his friendships and intellectual life within the closed French circle, Gentilz focused his artistic vision on the indigenous cultures of the Southwest, whose long and rich history was yet to be recognized. Indians, Mexican ranchers and villagers, street scenes on both sides of the border, and Spanish missions all captured his attention. In addition to his painting for many years Gentilz taught painting at St. Mary’s College. Dedicated to history as well as to art, Gentilz tempered his somewhat rigid painterly style with considerable drafting skill to produce a valuable record of events, characters, customs, architecture, and landscapes of his place and time. As a historian he also attempted to recreate contemporary events to which he was not actually a witness, as in his “Battle of the Alamo,” “Death of Dickinson” and “Shooting of the 17 Decimated Texians at El Salado, Mexico.” That which he deemed important to his period has proved important to posterity. Today his works are consulted by scholars and avidly sought by collectors.