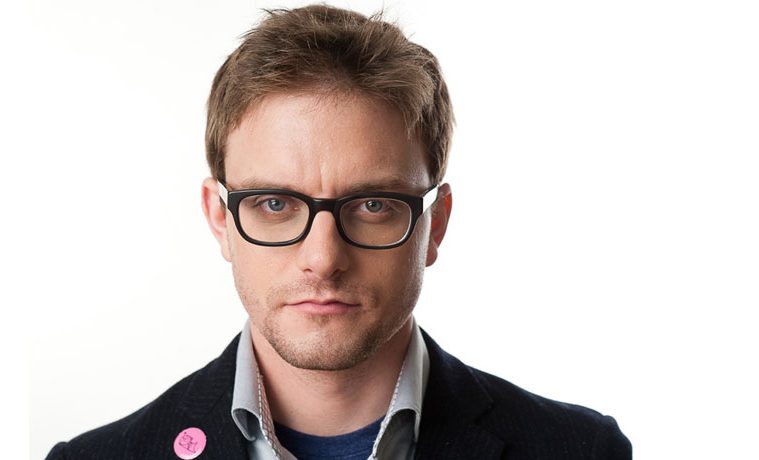 Sydney Skybetter and the Hacker Ethos

Sydney Skybetter is a keynote speaker at the 2013 Houston Arts Partners Conference, on Sept 13-14 at Houston Ballet Center Dance.   Skybetter is a technologist, choreographer and speaker based in Providence, RI. He has consulted for The National Ballet of Canada, New York University and Sterling Publishing / Barnes & Noble, among others, and lectures on everything from dance history to retro-futurism to why you shouldn’t be an idiot on the Internet.

He’s also the artistic director of the dance company skybetter and associates, whose next performance is the New York Premiere of Eveningland (commissioned by The Kennedy Center) at Roulette in November. Skybetter visited with A + C editor Nancy Wozny about his upcoming Texas visit.

Arts + Culture: Your Dance USA From the Green Room essay, Letter and Apology to Dancers About To Enter the Dance World, caused such a stir that you got called to do some Texas time. I remember this as the day my Facebook feed turned into your face. You hit on something mighty profound for all of us in the arts, and not just college arts grads. What happened from where you stand?

Sydney Skybetter: I’m always happy to do time in Texas. I feel like there is so much great work being done down there.   In any event, ‘Letter and Apology’ was a piece I wish someone had given me when I was a 21-year old conservatory baby about to enter into a marketplace I knew literally nothing about. I’d scarcely call the blog post profound- I was trying to mimic the snarky staccato of the text messages my students seem to send- but it did  strike a nerve, didn’t it?

A + C: Yes, and at a time when artists can feel most vulnerable.

SS: Foremost, on the part of art students who feel tremendously (and rightfully) anxious about how their training will serve them in the ‘real world’. Secondly, by dance faculty, teachers and other creatives variously aware that the world has moved on since depressed rents in New York City in the 1980s allowed the (so called) dance boom to happen. Whatever the merits or inaccuracies of  ‘Letter’, my intention was to countermand a few of the mythologies perpetuated by the dance community. You know the type. Like, you’re only a ‘real’ artist if you impoverish yourself, starve yourself, or get that grant, nab that commission, or whathaveyou. When was the last time you overheard a candid conversation in a university or conservatory about how ‘success’ in the art world skews along gender, class, race and sexual lines?

A + C: You are going to talk about something you call the “hacker’s ethos”. What is that?

SS: I’m deeply fascinated by how many hackers (aka makers, coders, web developers, neck beards, etc) approach problem solving. A lot of these folks aren’t successful because they’re smarter than anyone else, or luckier, but because they failed faster than their peers and learned correspondingly faster. There is a zeitgeist of ceaseless iteration that keeps pace with relentless technologic progress.

Variations of what I call the ‘hacker ethos’ can be found in texts by Clayton Christensen, Eric Ries, William Baumol, Adam Huttler, Jennifer Edwards and Diane Ragsdale, among innumerable others. It’s a derivative idea on my part, admittedly, but a useful counter to what’s too often the not-for-profit ethos of putting off failure for as long as possible, and then concealing all evidence said failure took place.

SS: How can an individual, let alone an organization, let alone a entire sector- learn from any given failure, if failure is systemically cloistered and disavowed? It’s no wonder, then, that folks in the not for profit performing arts are struggling. They have to fight battles that others have won, lost, and moved on from thousands of times before. To call it inefficient would be an insult to understatement.

A + C: You mention entrepreneurship and the arts. Say what? I though we were all supposed to be nonprofit. What has been the major culprit in our thinking that led us to using old, stale and dried up models for a few decades too long?

SS: I think about the term ‘entrepreneurship’ a lot, especially as the term has been popularized despite effectively being a shorthand ‘solution’ for intractably complex and interlocking problems. (How does a struggling orchestra sell bolster it’s flagging revenues? By being more entrepreneurial, of course! Want to improve your marriage? Try entrepreneurship!) It’s a term that’s largely been exhausted of meaning, like ‘technology’, or ‘social’ or ‘viral’.

And those ‘stale’ models you mention are beyond old. They’re toxic old. The 501c3 not-for-profit corporation is a product of a very different historical era, as is, for that matter, the ‘foundation’, the ‘arts council’ and the notion of a ‘tax deduction’. These are structures that serviced the political and financial powers of the time, though frequently they seem ahistorical and apolitical. They’re not. Remember when Altria gave out sponsorships to the performing arts like they used to give free cigarettes to GIs, and folks made ‘for the greater good’ arguments and ‘working within the system’ arguments to permit the draw down from industry to pay for dance shows? I can’t judge- I’ve never been offered such a sponsorship- but in an era of double bottom line and triple bottom line businesses, this sort of ethical dilemma seems terrifically antiquated.

A + C: Bring this discussion into your own life.

SS: I think my own entrepreneurial practice originated from a deep dissatisfaction with the status quo, and a naive impulse to somehow imagine otherwise. I remember, at a precocious age, thinking it was ‘dumb’ that dancers were so disempowered, so poorly paid, and basically without a written intellectual tradition. I tried to figure out how that come about, and learned that for the greater part of the last four centuries of Western dance, dancers have been variously commodified, prostituted, routinely set on fire, and made to physically fight with one another for pathetic wages. This is our dance history.

And it drives me totally crazy to see that history reified on a daily basis in the contemporary dance world. These stale models aren’t decades-old stale. They’re “centuries” old-stale, and we really have to do better. Thus, from my perspective, entrepreneurship isn’t about being a for-profit or a not-for-profit. It’s about fighting like hell to create your own means to do work you’re passionate about, while opting in or out of cultural legacy code as you see fit.

A + C: You are also a choreographer. How do you combine your dancing making and art biz life?

SS: I move fluidly through ‘business’ and ‘artistic’ contexts, and to a very real extent, have created a consulting practice (with my brilliant business partner, Jennifer Edwards, who is also a phenomenal choreographer, PS) predicated on obviating that very distinction. I consider change management to be a form of choreography, and vise versa. This may seem a semantic (or more likely, way over-cerebral) distinction, but my point is that I derive incredible pleasure from the combination of my artistic and entrepreneurial practice. To do one or the other would destroy a balance of thought work and art work that is a substantial part of who ‘I’ am.

One consequence of this splay is that as a choreographer, I have made a conscious decision to not perform in every possible show. To not accept certain commissions, and to turn down work that is not conducive to paying my dancers as well as I conceivably can. It means that I don’t choreograph as much as I could, and thus, folks often know me as the technology guy, which with I’m cool.

A + C: What do you hope the audience to get out of your talk, besides being utterly charmed by photos of your adorable two-year old son?

SS: That’s it, mostly. OK, and one or two other things too, I suppose. I believe we fear our future insomuch as we lack the agency to create it for ourselves. This keynote is about collaboratively working with others through higher education, through the performing arts and through technology to dismantle the architectures that perpetuate our fractious society. Really, I just want to be less fearful, and especially to be less fearful of failure. How can we place bets about our collective future without being prepared to fail by the standards of the day?