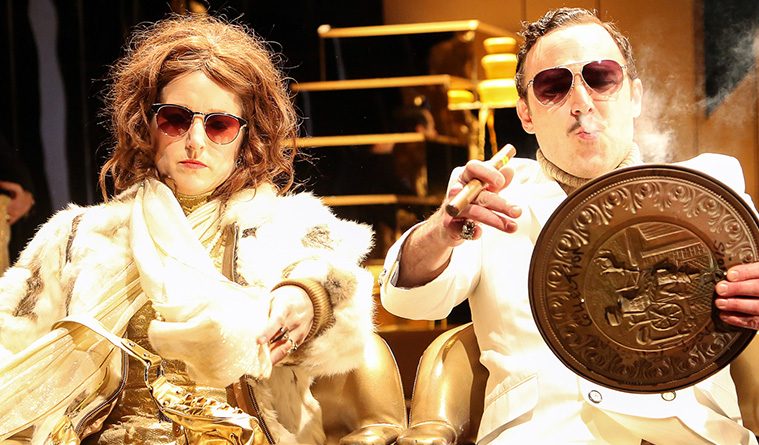 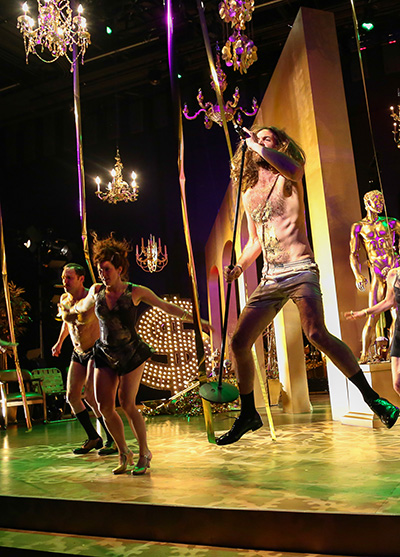 It strikes me as charmingly fitting that the Rude Mechanicals see queso as a symbol of decadence. The choice speaks to the Austin-based theater collective’s down-to-earth, welcoming attitude, and their humility in the face of tremendous national success.

The quintessentially Texan dip symbolizes the group’s native roots and flows from a queso fountain in Stop Hitting Yourself, their newest work, which was commissioned and premiered by LCT3/Lincoln Center Theater, New York City, 2014 and ran to mostly sold-out houses for six weeks. Now, the show is coming to Dallas, May 28-30 at the Wyly Theatre as part of AT&T Performing Arts Center‘s Off Broadway on Flora Series, which will, surprisingly, be the Rude Mechs’ Dallas debut.

David Denson, who curated the series, had his eye on the Rude Mechanicals for quite some time, and initially approached them about bringing The Method Gun. But when he spoke with the group and discovered they were thinking of touring Stop Hitting Yourself, he jumped at the opportunity to showcase their newest work. He describes them as “a wildly original group that always seems to tackle really big ideas with an unique perspective and a kind of old-school practicality, coupled with an off-the-wall sense of humor that makes attending one of their shows a bit of a theatrical thrill-ride.”

And the queso in Stop Hitting Yourself is just one of the examples of their quirky sense of humor. Rude Mechs’ playwright Kirk Lynn laughingly explains the rich, golden liquid as their version of what posh looks like. “If we go to a nice restaurant, for us, there’s queso at the table. That’s kind of a signifier that you’ve made it.” Because queso is extra, more than just the free chips and salsa that come with your meal. 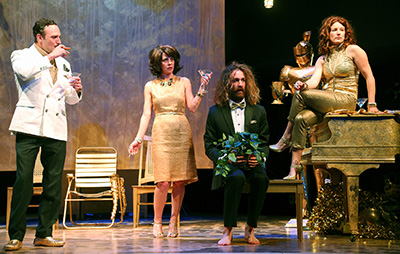 So when Lynn was drafting a play that would explore the decadence and steely individualism of late-capitalism, he wrote “there is a fountain of queso” into the stage directions, largely as a signifier of ridiculousness. And in the way that most Rude Mechs pieces come together, the queso fountain stuck, turning into an essential part of a play that began with a short list of ingredients: Busby Berkely, Ayn Rand, confessions, and tap dancing.

All of that somehow spun into a tale of royalty, privilege, and merciful condescension colliding over a wild man of the forest and a charity gala… with queso, and singing, and audience interaction.

Director Shawn Sides has a hard time explaining their process for devising new work since it’s such a collaborative unfolding of disparate ideas. Their pieces usually start with a few core elements and evolve as the team rehearse and workshop the shows in front of audiences.

Field Guide, their current work-in-progress (commissioned by Yale Repertory Theatre), brings together The Brothers Karamazov, stand-up comedy, meditation, and acting cubes in an effort to figure out how to be a good person. Or maybe how to live a better life. Or possibly (hopefully?)  both. 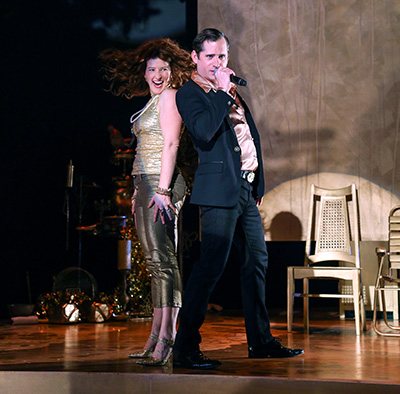 The full title was the starting point: Field Guide for Better Living. To that, they added The Brothers K as a skeleton – a literary classic that brought enough cultural baggage with it for audiences to have some familiarity, and which more or less looks at the search to be a good person. Then everyone brought their interests to the rehearsal room, and the play started to take shape.

When I asked her how the group’s process has evolved over the years, Sides explained, “ever since we finished Method Gun, I think there’s a lot more agency. People in the room will go, ‘I have this idea that I’m working on, so can I take one of the rehearsal days?’ And they’ll just sort of take over the rehearsal. And I really dig that. That’s really cool, to get a bunch of different ingredients in the pantry.”

Actor Thomas Graves, another of the group’s Co-producing Artistic Directors along with Sides and Lynn, found that kind of collaborative creative process enthralling when he stumbled upon the Rude Mechs roughly a decade ago. After graduating college, Graves planned to be nomadic for a while, working his way across the country volunteering for theater groups. But after getting cast in his first Rude Mechs show, Graves fell in love with their way being.

He reminisced, “I was really excited by the prospect of being a generative artist as a performer – having a lot of say in what ended up on stage, rather than being handed a script and designated blocking. That was really appealing and kind of something I felt like I’d been looking for but didn’t even know what that thing was until I found it.”

Graves sees the seemingly random combinations of materials that make their way into the group’s shows as a fascinating testament to a whole bunch of people working together. He explains that their process isn’t linear, where they start with Brothers K and get to acting cubes (his personal hobby horse in Field Guide). Rather, everyone brings their ideas to the room and they smash them together and see what works. 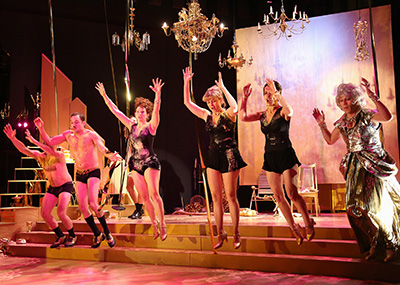 And deciding what works and what doesn’t, isn’t made democratically. Rather, the Rude Mechs make their decisions by consensus – which isn’t voting and isn’t compromise. It’s chewing on ideas and hashing out problems together until, as Co-producing Artistic Director Madge Darlington explained, “you find something that everybody’s truly behind and invested in. Consensus is not, ‘oh, four of us don’t care about that, and one of us does.’ That’s just being lazy. The way it actually looks is we keep bringing up a problem week after week, until all of a sudden something shakes loose – somebody says something, and somebody else riffs on something, and all of a sudden that’s the spark of something. You can just tell. Everybody gets a little bit excited.”

Importantly, consensus decisions mean everybody’s on board. Graves notes that “as tough as that process can be sometimes, I think coming out on the other side of it feels very satisfying and may have something to do with the longevity of the company – making sure that there aren’t a small group of people that would rather not be doing such and such.”

With twenty years of collaboration under their belts and no end to the national tours in sight, the willingness to hear each other out has served the company well. With three shows currently touring, two plays in development, and a re-mount on the horizon, the Rude Mechs’ biggest problem these days is getting everyone in the same room. 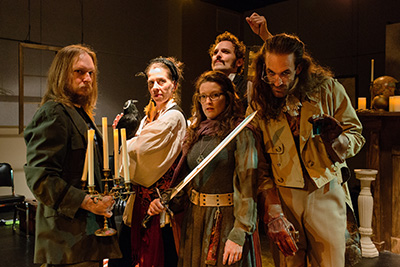 The group’s calendar is both exciting and daunting. April took them to Philadelphia with Now Now Oh Now; May brings Stop Hitting Yourself to Dallas; the company will be home in June working on their youth outreach program Off Center Teens. In July, they’ll get a bit of a break, but then it’s on to rehearsals for their re-mount of Match Play (which will be in New York in October) and their September production of Fixing Timon of Athens. November takes Stop Hitting Yourself and Method Gun to San Francisco, and (hopefully) December will bring Now Now Oh Now back to Austin (where we haven’t seen the finished product).

But Sides, who just won a Doris Duke Artist Award, assured me that next spring is on lockdown. “We have told our agent the spring is holy and sacred and you can’t book us anywhere, because that’s when we’ll finish Field Guide.”

A calendar booked almost a year out is partly to blame for the two-years it has taken the Rude Mechs to put together their book project (that will eventually be published by 53rd State Press). The work will likely include scripts for Lipstick Traces, Requiem for Tesla, and The Method Gun, along with various ephemera that are still up for debate.

When I spoke with Lynn (whose first novel comes out this fall), he hadn’t been able to make the company meeting to discuss the book. After two decades of working together, though, he trusts his colleagues implicitly. He pointed out, “it seems suitably funny that the writer is like ‘I’m too busy to be involved in the book. No big deal.’ That’s so Rude Mechs! To be like, ‘well, we can do it without a writer! It’s just a book! Why would you need a writer?’ It’s fantastic.” 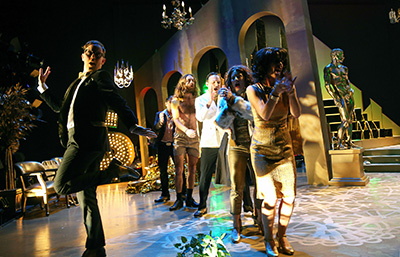 The book will likely include company members’ memories of how productions took shape, which, with so many people involved over so much time, are bound to yield interesting divergences. Even asking bout the origins of the queso in Stop Hitting Yourself yielded an array of conflicting (and entertaining) anecdotes.

Sides told me, “I’ve often said that ‘queso will be the food that’s free in heaven, and it will flow from fountains there.’ And Kirk remembered that from years and years ago and made it into a thing.”

Graves, on the other hand, remembered that the queso fountain came from a development exercise in which the company wrote down what their ideal party would be like. “And there was a long list of things, with all kinds of crazy stuff, but almost everybody listed queso fountain. So maybe four out of five of us determined that the ideal party would have a queso fountain, and it was like the only common thread that we all agreed on. So at that point it just had to be in the show.” 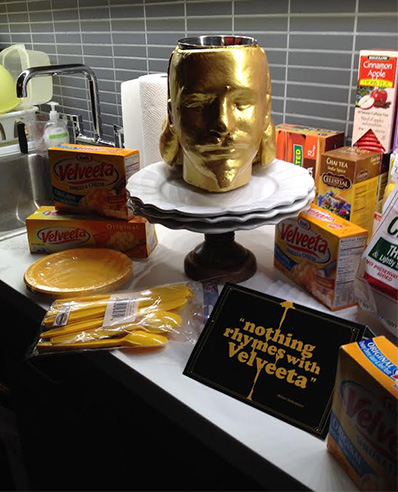 After more than fifty performances at Lincoln Center, the mystique of the queso fountain grew so large, in fact, that Velveeta (yes, the company) sent the Rude Mechs a care package on closing night. In addition to boxes and boxes of processed cheese, the shipment included a golden bust of Shakespeare with a bowl hollowed out of his skull (presumably for queso), and a card reading “Nothing rhymes with Velveeta. Congratulations on a show well done from Velveeta to Rude Mechanicals.”

Darlington remembers it as “the strangest package I’ve ever opened in my life.”

She also cheerfully laments the amount of research and development that goes into so much of their new work. When their process is so collaborative and experimental, the moment they hit on an idea, they need a prototype. “But that’s exactly the moment where you need about four weeks of research and development, but you actually have about twelve hours to get it into the room.”

Nobody thought it would be so hard to build a queso fountain. But ultimately, they spent hours and hours trying to find the right consistency to get the cheese to flow through the machine. And then, as the play evolved for the New York production, many more hours went into figuring out how queso splatters, how it drips, how to work with it and avoid broken legs – because, of course, queso is slippery.

And, as Lynn told me, “It’s like Chekhov’s gun. Once you have a queso fountain on stage, you know something’s gonna happen.”