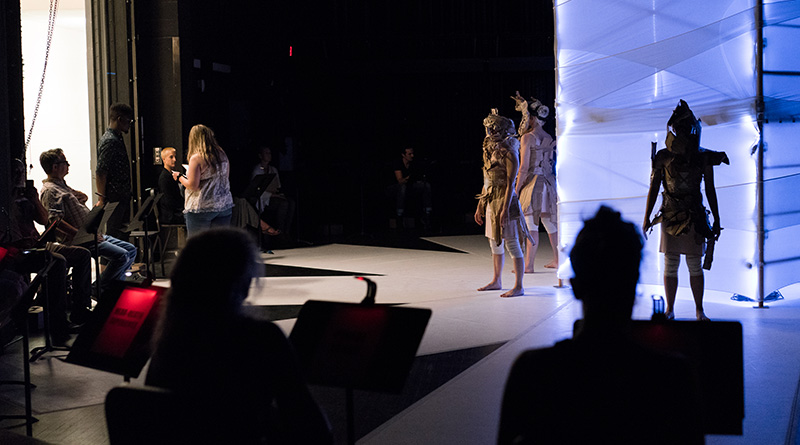 Audience members find their assigned seats after entering the open bay door as performers flank the set at the beginning of The Tower Is Us (A Prisoner’s Cinema), produced by ARCOS Dance.
Photo by Swng Productions.

You arrive at Texas State University’s Performing Arts Center in San Marcos and find the front doors to the lobby locked.   Signs direct you to the side of the building instead, where you receive an assigned ticket with a clue that will lead you to a specific seat inside, away from anyone you arrived with. Guided with your fellow audience members through the raw, utilitarian backstage guts surrounding the ornate Patti Strickel Harrison Theatre and into a fluorescent-lit hallway normally seen only by crew and performers, you realize you must open a typewriter case on a pedestal and, perhaps with the help of those old enough to remember how, insert and play an audio cassette in a tape recorder. Through the noise and hiss of the tape, a voice welcomes you and gives detailed instructions: “Take out your phone. Make sure the ringer is turned on and the volume is up. Get my number and text me so I know you’re here. You’ll need your camera and flashlight. When everyone is ready, press the green button on the wall.” Someone behind you presses the button, and the large bay door groans as it rises up. The game begins.

What if a dance piece could be “played” like a video game? How would the audience feel if they had to literally “crack the code” of modern dance gestures in order to “win” and complete the performance? Could seeing choreography as a kind of foreign language actively engage new processes of cognition and empathy? How can we, as performance makers, give audiences more agency in a production—what if, in fact, it were entirely dependent on their participation as individuals and a group? These are just a few of the questions my collaborators and I at interdisciplinary dance group ARCOS were excited by as we developed The Tower Is Us (A Prisoner’s Cinema), a hypnagogic transmedia performance combining video game and live dance-theater to decode an urgent message in an unspoken language. The performance is “played” by its spectators, who are immersed in a world where beings try to communicate with the dancers in a signed language that they must seek to understand using their phones and materials provided to them at their seats.

Considering the agency of an audience has roots in my multidisciplinary upbringing, where there was less of a distinction between play and performance, and singing, dancing, acting and storytelling were as common at the dinner table as in a classroom. I left some of these creative interests behind when I committed fully to my dance training, but carried with me a fluid sense of where and how performance could take place, and for whom it could be enacted. Learning from and creating with choreographer Curtis Uhlemann over the last twelve years fortified that curiosity into an obsession with subverting, disrupting, or abandoning altogether the proscenium, as a means to challenge our own creative process as well as the boundaries of the audience-performer relationship.

This began in earnest in 2011, when Curtis and I formed ARCOS and further expanded when we engaged multimedia artist Eliot Gray Fisher as a collaborator the following year. Since then, we have pursued our mission to “experiment rigorously to discover adventurous new forms of contemporary performance” by constantly attempting to make work unlike anything we’ve seen before. Pulling at our attention lately have been the set of mysteries and complexities around audience interactivity, fueled largely by the rapidly evolving technological landscape of the Twenty-First century. The dominant concept of a passive audience is a relatively new and culturally specific construct, as many forms of performance take the form of rituals with more active roles for spectators. However, the last decade has seen a resurgence of interaction in theater, beginning in large part with Punchdrunk’s trailblazing immersive piece Sleep No More, though it still remains relatively uncharted territory in the dance world. ARCOS has experimented with models of interactivity in pieces at Austin’s multidisciplinary festival Revolve, giving viewers direct control over the performers by manipulating a sensor (The Tower Is Us, 2016, and the genesis of this project) or posting commands online that direct the camera during a live video stream (Remote, 2017). Our attempts to reach our audiences beyond the confines of the theater began with our four-month long transmedia experiment Domain, which took place in chapters across five US cities and culminated in an evening-length premiere at Engagement Symposium of Philosophy and Dance at Texas State University in September 2016. Domain combined dance with a science fiction narrative presented across multiple media, including a website with periodically released multimedia chapters and an interactive installation for audiences to have an intimate, personalized conversation with the artificial intelligence that played a major role in the evening-length theatrical presentation. Relationships forged at Texas State led to another residency for ARCOS this year, and with partial funding from an Artistic Innovations grant from regional arts service organization Mid-America Arts Alliance, we began experiments to discover a form of choreographic storytelling that would be new to us and our audiences.

Attempting work unlike anything we’ve ever seen requires a widely net cast in many directions. Friends introduced us to the indie video game scene with experiences like Campo Santo’s Firewatch and Cardboard Computer’s Kentucky Route Zero, which swept us up in their mix of lush imagery and sophisticated narratives that unfold like novels. Most compelling to us were their unconventional incentives that complicate our impulses to “win,” often encouraging a meandering experience as opposed to a clear and finite objective. In performance, we were fascinated by the growing community of makers working with branching narratives and other strategies borrowed from gaming, such as Third Rail Projects and Maelstrom Collaborative Arts. Research for our own work also included subjects such as the hallucinatory perceptual phenomenon known as “prisoner’s cinema,” sign languages and concepts relevant to the creation of constructed languages, and the social theory of “preference falsification” developed by political scientist Timur Kuran. Qualities and themes from this broad palate allowed us to make new connections across disciplines that informed every aspect of the production, from the narrative arc of the evening to the implementation of multimedia elements to the way we rehearsed with the cast, which included actors Judd Farris, Bug Davidson, Alexis Scott, Charles Gamble, Bird Caviel, and dancers Katie Hopkins, Alyssa Johnson, Hailley Laurèn, Taryn Lavery, Sarah Navarrete. The modular nature of the piece required us to create the elements non-linearly: each “scene” had to be crafted both as a stand-alone unit and as a seamless part of the whole, whichever path the audience led us down. All choreography, lighting, projection, and music had to be structured to be interchangeable while still allowing for forward momentum for the players.

Our lighting, technical, and sound equipment is rigged to a three-tiered spire of construction scaffolding around which spectators are situated at isolated, single-player stations. Throughout, players communicate with one of the main characters via text message as we performers also try to communicate with them in our unspoken language. Each participant’s station has an individualized, handmade booklet they can use as a guide to interpret what they’re seeing.

As performers, we are at their mercy as to what they want to see next (and how long it takes them to decide) in a sort of Merce Cunningham-meets-Choose-Your-Own-Adventure. I’m not often one to write out my choreography for a piece, but it was absolutely vital for Tower. I designed a flow-chart for the cast and rehearsals including “order prep,” where Curtis would call out a potential player selection and we would rehearse the appropriate transition and set-up (dancers experienced a learning curve with this, with some hilarious mishaps). We had to rely on one other more deeply than usual while trusting our individual instincts, creating a strong sense of play, intense teamwork, heightened anticipation, and a readiness to be flexible and adapt in the moment that went beyond anything I had yet experienced in performance. We played the game, too.

According to post-show surveys, the players shared these elevated sensations with us during the piece. Their responses described feelings of excitement, frustration, engagement, gratification, confusion, competitiveness, satisfaction, and above all, an increased level of engagement with contemporary dance. As one player put it, “If a stage show were a painting, this was like being in a room full of canvas, watching the artists paint and trying to figure out what it means as they go, and occasionally they even ask you which color you think they should paint with!”