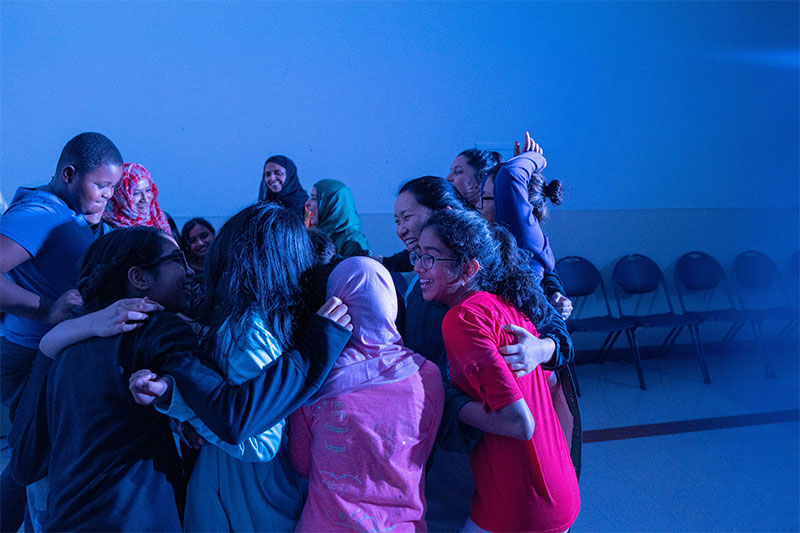 Texas Lens: Us and Us

“What would you do,” the performer asks, turning to the audience, “if you were in our shoes?” Having just experienced a piece of theatre that was already challenging in language, in format, in content, in size, in scope—the audience’s ultimate task was to find empathy.

That performance was THE BIG “US” PROJECT, a community-driven theatre piece created by more than 100 members of Houston’s refugee communities. Facilitated by Brave Little Company and our partners, the project was open to participants of all ages and experience levels, from people who had never had a chance to participate in the arts to people who were master artists in their countries of origin.

After a year of work, 124 collaborators created a piece that was by turns tragic, humorous, mundane, and mysterious. To experience THE BIG “US” PROJECT, audience members journeyed through several rooms of the performance space—the Southwest Multi-Service Center, a city community center in Houston’s Gulfton neighborhood. The artists and their stories were staggeringly diverse, refusing to distill the experience of being a refugee to a cliché. Within the performance space, the audience’s travels took them from excavations of ancient Sumeria and Babylon, to the aftermath of shipwrecks in the Mediterranean, to an airport in Rwanda and a cramped trailer leaving El Salvador, to markets in Iraq and to Houston of today.

My own journey with THE BIG “US” PROJECT began two years ago. I was invited by David Rainey at The Landing Theatre Company to direct a production of Winter Miller’s In Darfur, based on the playwright’s experience and observations when she traveled to Sudan with journalist Nicholas Kristof.

From the time we began working on the play (Summer 2016) to the time we produced it (Spring 2017), the project grew from a fun staging puzzle to an urgent message of empathy in a xenophobic age, to an opportunity to get out of our theatre bubble and truly collaborate with Houston’s Darfuri/Sudanese and refugee services communities. The partnership of the Darfurian Association of Greater Houston in particular ensured that Darfur could be respectfully and faithfully represented and the voices of Darfuri refugees could be heard.

The play is set in a dystopia, in which all the systems are broken, the corrupt government funds terrorist attacks on minority populations, and rape is a tool of genocide. (All true, by the way.)

In the play, a Darfurian woman named Hawa escapes a brutal and deadly Janjaweed raid on her village and walks for days to reach a camp for internally displaced persons. Hawa, a teacher, speaks English, Arabic, and Zaghawa. An American reporter realizes that Hawa’s English fluency makes her the one person who can tell the world firsthand about the Darfurian genocide. But to give her story credibility in the American newspapers, the reporter must name her source, despite her promises—and Hawa, once her account is published, faces the consequences of the reporter’s decision.

Imagine you had never seen a live play before, and the first time you ever set foot in a theatre, the play you saw was about your life.

Theatre lovers all have that show (well, at least one) that calls us back to production after production, that soundtrack we keep on loop. We try to rediscover that feeling of deep resonance, either when a character gives us a chance to live vicariously or when we have the affirmation of being “seen by art”.

As a white woman, I see myself on stages and in audiences all year long. Art sees me and it sees people like me. That validation is like a ticket to being human in the eyes of the world, and not everyone is getting that ticket.

I had been directing professionally for about 15 years when In Darfur was produced, and had no inkling that I could still experience such a huge revelation about my art form. But when my friends from the Darfurian Association and other groups who had never seen a live play before said, “This is my mother’s story. How did you know to tell it?” and “How did you figure that out? It is so Sudanese,” and “How can we tell our story so that more people know about it?” I realized I had become too comfortable in putting the power of theatre to work for my own diversion, when its latent power was centering stories of the marginalized, building community, affirming common humanity—making our “us” bigger.

Once the production closed, I knew it was important to continue these partnerships and friendships, not just in service to a play I was working on, but to find a way to make Houston theatre truer and more reflective of all of us.

And then Hurricane Harvey happened. And in the aftermath, when people of all backgrounds pitched in to help each other, when the distinctions of “us” and “them” were wiped out, we got to see how big our “us” could be. And it was there in how we wrote the city’s name: #hoUSton.

In the process of creating the piece, the collaborators and I returned many times to one question: what do you want to tell the Houston audience who sees your performance? And we returned to a few answers. We want to emphasize the beauty of our culture. We want to tell people we are not here to take anything from them. We want people to know that our stories are not all the same. We want people to know our lives are not sad. We may appear different, but we all have a heart and a brain. See my humanity before you see my race, my color, my religion.

I didn’t anticipate that at this point in my career, I would want to rethink every hard-won piece of wisdom about theatre production that I’ve gleaned—because the systems we rely on to make theatrical production successful are actually limitations on the potential of the art. The effect of those systems is actually to silence more people than they support.

For THE BIG “US” PROJECT, we had to challenge every assumption that supports those systems. First, the artwork had to develop based on the participants, rather in response to a directorial vision. Second, we abandoned the short production timeline, the assembly line model that is impossible unless you rely on people you already know. We mentored new artists in the exploration of their craft. We adjusted for life needs that would not be accommodated in a professional rehearsal schedule, such as a last minute work change or the presence of small children. We met at all hours in people’s homes, always welcomed with hot tea or coffee and a homemade feast. Collaborators relayed discussions and dilemmas in their common languages. When we didn’t have a spoken language in common, we drew pictures or texted photos back and forth.

Working on THE BIG “US” literally changed even the way I interacted with strangers on the street. If anyone could be part of the production, everyone I met was a potential collaborator. Walking in the city, we usually avoid eye contact, keep our heads down or freeze out someone walking the other way toward us, making both ourselves and them invisible.

We think of art as a way to tell the truth. But when some people are excluded from the chance to be an arts creator, is the art our community produces true enough? Some stories get “seen by art” more often than others. They get told so often they drown out everything else. They ascend to mythical status, both beyond truth and impervious to it, with their own gravitational field. They might even be called “universal,” though as American Theatre senior editor Diep Tran writes, people excluded from the universal bear the unconscious burden of “transposing [themselves] into other people’s bodies,” in order to feel seen on stage.

I think those of us fortunate enough to be exposed to the arts are missing a critical part of our education: to seek out stories that we don’t relate to and which don’t reflect us. We have to go outside of our comfort zone to escape that gravitational field of what we’re used to.

Just last week, I attended the Theatre for Young Audiences/USA conference at Atlanta’s Alliance theatre. Pearl Cleage, the Alliance Theatre’s “poet, playwright, and prophet in residence,” gave an astounding keynote, in which she said, “There is no ‘us and them’. There is only ‘us and us’…There is only ‘us’ together.”

So: what will you do, to put yourself in others’ shoes?