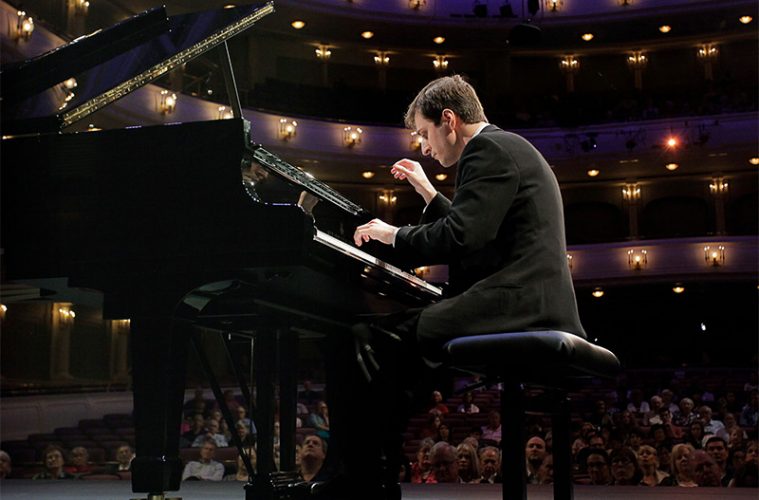 When Immanuel and Helen Olshan founded the Texas Music Festival (TMF) 30 years ago at the University of Houston, they had their eyes on the future. “We expect this be perpetual,” said Helen Olshan, in a 1993 interview for the Houston Oral History Project. “It is not a temporary thing. That’s why we’ve made a foundation for it.” How fitting that the man who started Houston’s first foundation business would be instrumental in building the future successes of so many aspiring musicians. 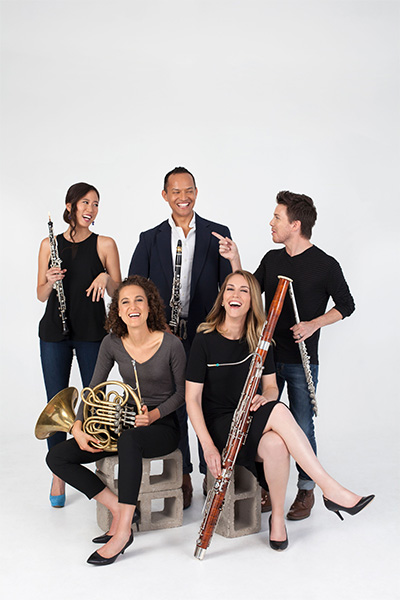 WindSync performs Apollo by Marc Mellits, a new work commemorating the 50th anniversary of the Apollo 11 Moon landing mission as part of the Texas Music Festival’s PERSPECTIVES Series: Faculty Chamber Music on June 18 at the University of Houston. Photo by Kristina Jacinth.

The Olshans were generous philanthropists whose shared passion for music and education led them to take an interest in youth symphonies. They began by awarding scholarships to young musicians to attend the summer festival of their choice anywhere in the United States. One summer they took an extensive trip to some of the best music festivals in the country—Aspen, Tanglewood, Idlewild, Brevard—and saw that Texas had nothing comparable. They hoped to establish a first-rate summer music festival right here in Houston. That bold dream became a reality when David Tomatz, then director of the University of Houston School of Music, approached the Olshans with the idea of hosting a summer music festival at the school. The Texas Music Festival was born.

Alan Austin, TMF General and Artistic Director, has been in the thick of it from the very beginning. First as a young violinist in the inaugural TMF orchestra (1990), then as chamber music coordinator and faculty, and now in his current leadership position, Austin has seen the festival blossom over three decades from an experimental local start-up to one that’s recognized all over the world. He remembers the “absolute fearlessness” of founding director David Tomatz, who organized the first festival in less than 6 months, building a full orchestra of 90 plus musicians. He established the basic 4-week framework of the festival, with daily orchestra and chamber music rehearsals, masterclasses, as well as weekly private lessons for each musician. “We set off with a splash with very distinguished conductors that first year,” recalls Austin, “Maxim Shostakovich, son of Russian composer Dmitri Shostakovich, Mexican conductor Jorge Velazco, Swiss conductor Niklauss Wyss, and famed American violinist and conductor Sidney Harth.” 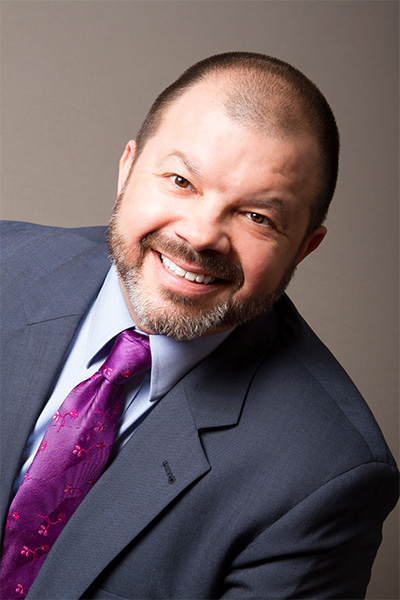 For its milestone 30th anniversary (May 30-June 29), Austin chose to highlight the accomplishments of past TMF fellows. “I wanted all of our soloists to be former students who have gone out into the world and done something extraordinary. What better way to showcase what we have built here?” TMF alumni have established careers in the concert, symphony, and chamber music arenas all over the world, as well as in music education and arts administration. The “Where Are They Now” list of past TMF fellows is indeed astonishingly impressive and too extensive to list here. This summer, TMF will welcome back French horn player Ernesto Tovar Torres (TMF 2012) of the Philadelphia Orchestra, violin virtuoso Xiao Wang (TMF 2012), 2017 Van Cliburn International Piano Competition Silver Medalist Kenny Broberg (TMF 2015, 16), and three members of the award winning chamber ensemble WindSync (Kara LaMoure, bassoon; Julian Hernandez, clarinet; Anni Hochhalter, horn).

Austin also wanted to recognize some of the conductors who have been important to the development of TMF over the years. Four conductors with close ties to TMF will take the podium over the span of four weeks this June.

Maestro Franz Anton Krager, TMF Music Director and Chief Conductor, will be conducting the opening night concert (June 8), a tradition that began when he first joined the festival in 1993. Austin calls Krager a “great colleague and a partner in crime.” A brilliant pairing of Copland’s Fanfare for the Common Man and Joan Tower’s Fanfare for the Uncommon Woman will open the celebratory concert. The Tower piece, dedicated to influential female conductor Marin Alsop, was commissioned by the Houston Symphony in 1986 to honor women in classical music. Mr. Broberg will solo with the orchestra in Rachmaninoff’s Rhapsody on a Theme of Paganini. Led by guest concertmaster Xiao Wang, the TMF orchestra will close the evening with Rimsky-Korsakov’s sensuous symphonic suite Scheherazade, inspired by tales from the Arabian Nights. 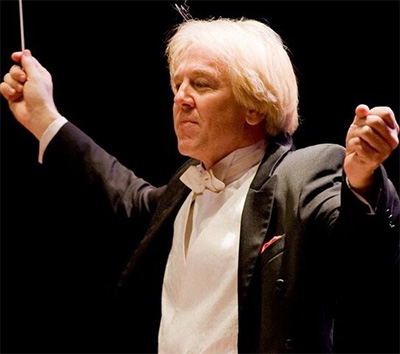 Bulgarian conductor Rossen Milanov, in his third appearance at TMF, will be leading the orchestra for week two (June 16). The program pays homage to some of the iconic music featured in the Walt Disney classic Fantasia, including Dukas’s The Sorcerer’s Apprentice, Wagner’s Ride of the Valkyries, and the Bach/Stokowski Toccata and Fugue in D Minor. TMF alumnus Ernesto Tovar Torres will also make his solo debut with the orchestra in Richard Strauss’s Horn Concerto No. 1. Born in the border town of Reynosa, Mexico, Torres moved to Texas as a teenager, and he attributes his professional success to the life-changing musical experiences he had as a fellow at the festival. “Bill VerMeulen (TMF faculty and Houston Symphony Principal Horn) is a huge part of everything I’ve accomplished in my career.” Torres, now a horn player in the prestigious Philadelphia Orchestra, takes pride in his heritage and his accomplishments. “I’m excited to be on stage so that students who look like me will see me and know that they can do it too.”

Austin points out that the free fellowships each student receives upon being accepted to TMF is what makes the festival exceptional in terms of recruiting diversity. “If you get in, your financial situation is no barrier. This year we had 390 completed applications for 93 spots and live auditions at 16 schools all over the country. The goal is to have the best orchestra we can have.” Austin points to two elements that draw students to TMF, the big repertoire and the outstanding faculty. “Students get the opportunity to play the great symphonic masterpieces, and all of our faculty are in-demand teachers who have something unique to offer to the students.”

Mock auditions have also been a popular offering at TMF in recent years. Austin observes that one way TMF has evolved is that instead of being just a place to study and play in an orchestra, the students now are much more serious about a career path in a professional orchestra. To this end, many Houston Symphony musicians have offered their experience and expertise to TMF fellows in professional development panels, masterclasses, and mock auditions. Some of the best advice from the pros? “Be a good colleague, start now.” Austin relishes both the short-term artistic development of the orchestra fellows over the summer and the connections they form that grow into supportive friendships over the long term. “TMF fellows cheer on each other’s career successes.”

Commissioning has also been a big part of TMF over the last three decades. Carl St. Clair, Music Director of the Pacific Symphony and Principal Conductor of the USC orchestras, will reprise David Heuser’s high-octane A Screaming Comes Across the Sky, a 2005 commission for the New Texas Overtures Initiative, which St. Clair premiered with the TMF orchestra that year. The title is the first sentence from Thomas Pynchon’s novel Gravity’s Rainbow, and the music is charged with a sense of relentless kinetic energy that reflects the image struck by the vivid title. The week three concert (June 22) will also mark St. Clair’s seventh appearance with the TMF orchestra. It will feature the winner of the Cynthia Woods Mitchell Young Artist Concerto Competition as well as Berlioz’s deservedly popular Symphonie Fantastique.

As part of the Perspectives Series of chamber music concerts at TMF, WindSync will perform Mark Mellits’s Apollo, a work commissioned by this award-winning woodwind ensemble to honor the 50th anniversary of the Apollo 11 moon landing. Get ready for some hard-driving minimalist funk. Another new commission, Carl Schimmel’s Popet for Percussion Quartet, will astound and delight the audience with TMF percussion fellows dressed in costumes, under the control of a puppet master. It’s Pierrot Lunaire meets percussion, a daring theater piece that combines spoken 14th century Middle English text, intricate choreography, and striking music.

An additional Perspectives concert in the first week of the festival will feature Van Cliburn Silver Medalist and TMF alumnus Kenny Broberg in a solo piano recital. The audience will be treated to a preview of his programs for the upcoming 2019 Tchaikovsky International Piano Competition in Moscow.

Spanish conductor Josep Caballé-Domenech returns to TMF to conduct the final orchestra concert (June 29) of the 2019 season. Mahler’s Sixth Symphony, a work of almost mythical status in the orchestral milieu, will be the only piece on the program. At 80 minutes in length, the epic tour de force takes the audience from the highest emotional peaks to the lowest abyss. For both the performers and the listeners, it should be a cathartic experience.

With over 30 performances, TMF is Houston’s biggest classical music presenter in June. “It’s a good thing for the city as a whole,” says Austin. “There is something exciting that you sense when you see young musicians who are so passionate about what they are doing. They put their whole being into each performance.” More and more young people studying at major conservatories around the country are coming back to TMF each summer. “It’s a sign we are doing something right,” observes Austin. “It’s a draw. It’s the place to be.”