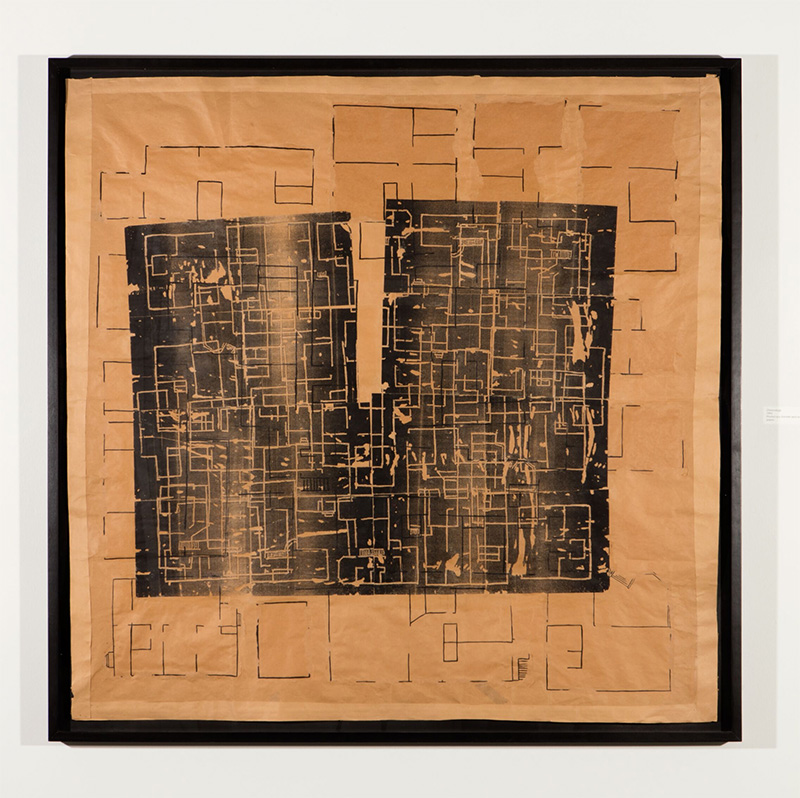 Annette Lawrence reads me something she’s written about her work: “I’m tuned in to things that go unannounced and remain steady, continuous, and unremarkable on the surface, but hold magic over time.”

If we might describe her process, it is a clear-eyed unfolding of that magic, patiently, as it appears. She’s been at work for years on a series of drawings that track time. Looking to her collections of journals, in which she meticulously chronicled her life from 1983 to 2007, Lawrence has been making circular drawings that visualize the periods of time her journal entries cover. Interested in systems and how we organize data, these drawings reflect particular dates, days of the week, months, over a span of years. While never allowing the viewer access to the intimate details of her writing, they offer a record of personal time-keeping, in a manner that can invite viewers to connect with their own modes of relating to time. We talk about the human impulse to identify celebrations and grief with specific dates, to record them and honor them.

These are about “how we’re looking at time, up close and far away,” she says. “When you look for a date, something happens. You’re opening up something.” The quotidian, the unnoticed and mundane, she reflects, are the sites where she finds connection, and where viewers can also find something about themselves.

While we are talking, Lawrence remembers a long-forgotten calendar that hung on the door of her mother’s closet. “If you knew what year you were looking for, you could find [where each date fell]. My sisters and I would be like, ‘I wonder what day of the month I was born on…’ I spent a lot of time playing with that calendar, making up something to look for and finding it… You could look at the future and the past, all in one place.”

Lawrence, who has been living in Denton for just over two decades, took a sabbatical from her teaching position at University of North Texas last fall. During her time away, she attended a residency at the MacDowell Colony in New Hampshire, where she produced 30 new drawings to complete a series of 136 circle grid drawings.

“There was a writer at MacDowell who, every day, asked me ‘how’d it go?’ And every day it was the same answer: ‘another day, another drawing!’” she says, laughing. “My fellow artists were looking at me like, ‘you’re completely crazy.’ I could see people’s eyes glazing over, [I could see them] wondering about my mental health.”

The repetition in the drawings, though, is both meditative and filled with gentle differences. Even as she draws seemingly endless circles, spiraling with information, they are always shifting subtly. “There’s plenty of things that happen, and they’re never the same,” she says. “Where do the radial lines go, for example? My work is always off-square; I go by eye. It looks straight, but when you measure it, it’s not.”

The residency provided time and space to work, among poets, novelists, composers, playwrights, visual artists, and dancers. At the end of each day of drawing, she would join her friends and colleagues for a shared dinner, comparing notes and ideas. While she also visits with her Denton-based colleagues, this was a rare chance to work in an interdisciplinary community, far removed from the concerns of teaching and daily home routines. “I needed that time to be still,” she says, still glowing from the experience.

The residency reconnected her with writers; she mentions that she’s always felt a close resonance to the written word. “Coming out of school, I found what I was looking for more in literature,” she tells me. “In the late ‘80s, it wasn’t happening the same way in exhibitions.” She cites Toni Morrison, June Jordan, Alice Walker, Audre Lorde, and Arundhati Roy as important influences. “Their words were the things that held me together. I could see myself there… it’s really important to see yourself [in culture].”

Recently, she’s been thinking about a publication of W. E. B. DuBois’s Data Portraits, a collection of charts, graphs, and maps that DuBois presented in Paris at the 1900 Exposition, as a way of making visible the lives of black Americans, and the representation of the color line he described in his writings. “The last show I was in was inspired by that book,” Lawrence says, referencing a group exhibition titled Recounting: Data, Disinformation, and Black Experience, on view at Guerrero Gallery in San Francisco late last year.

Lawrence has work in an exhibition at the University of Kentucky this spring, and in an exhibition opening in October at Conduit Gallery. In September, she’ll be speaking at Dia about another artist, On Kawara, and her favorite work of his, his 100 Year Calendar. “I just love that he drew 100 years on a piece of paper that’s probably about five feet wide and three feet tall,” she says. “I love how much information is in that tiny space. I enjoy that it’s specific. His actual life is recorded in those dots, and all that life that happens in the span of time is contained within that.”

Moving between past and present, we talk about the point she’s reached in her career, and what she hopes for the future. “I feel like I’ve had recognition in different facets of my career,” she says. “I’ve had critical, commercial, and academic success. Those three areas are both separate and overlapping. But I still feel like I’m at the beginning of something, and I’m looking forward to having time to find out more about this.”

After we talked, she sent me a short journal entry from 1998. I’ve been lightly teasing her about not sharing the content of her journals, of transforming her words into other forms of data. On April 22, 21 years ago, she writes, “For myself, I am allowing what comes to shape my life.” She describes what she is studying, thinking about her health, connecting with other artists. She ends with her signature generosity of exploration. “All of this is to say that I am not seeking higher and higher levels of recognition, but deeper and deeper levels of meaning and understanding. I want to know.”