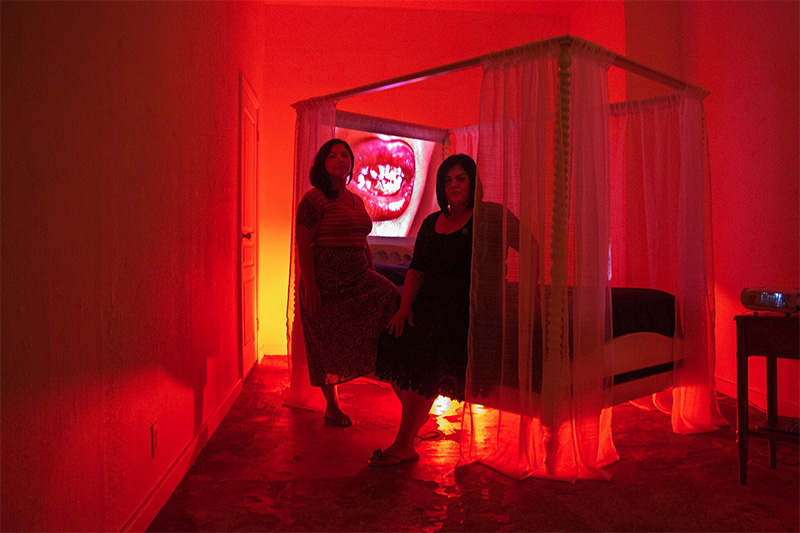 “It’s kind of like unlearning all that good girl stuff and becoming your own person. We needed it. And from the conversations we’ve had, we realized other women needed it, too.”

When I walk into Audrya Flores’s home studio in San Antonio, I find a wood-paneled room, with a carefully curated selection of objects—needlework, prints, collages, fabric pieces—paired with found things—a turtle shell, stones, a preserved bat, potted plants. On the floor sits an arrangement of nopal leaves that have been sculpted into hand-like shapes. A large window looks out to a lush garden, still green despite the cold snap.

“I’m working more and more with plants,” Flores tells me. “There’s such an exchange with the material. Art can be really ritualistic, but even more so when it’s from the earth.” She hangs the nopal hands by the door of her home, a kind of talisman to protect both her family and her own energies. Raised in Brownsville, Flores is a self-taught artist whose recent work looks to mythologies, brujería, and healing.

Although she had always been a maker, when her son was born in 2012, Flores turned to art to help re-center herself. “I felt out of control, unsure of who I was,” she says. “I needed to grab something that was really me.” Instinctively, she pulled materials from around the house and began making a self-portrait on brown grocery bags, working 10 or 15 minutes at a time. “It felt so good to rediscover or pull up from the ashes something that was me.”

That self-portrait, Mother of Thousands, caught the attention of the Más Rudas Chicana Art Collective and Flores began to receive invitations to show her work. In 2016, she was invited to have a solo show at Provenance Gallery and, through Provenance, she met Lisette Chavez, who was having a solo show there a few months later. Like Flores, Chavez is also from a small border town—Harlingen, TX—and was raised in a conservative Catholic household. The two immediately connected over their shared interests in storytelling, healing, and their complicated relationships to the religious traditions of their families.

“In high school, I was a total art nerd,” Chavez says. “And then, in my freshman year, Ms. [Olga] Sanchez was like: you could get scholarships for this kind of stuff, go to college for art, and make a living.” With graduate degrees from Texas A&M University-Corpus Christi and the University of Arizona, Chavez came to terms with her background through art. When you enter her home studio, the walls are covered in a meticulously arranged collection of religious and occult objects. Saints, Madonnas, and devils mingle with babydoll heads and vintage vixens float over a work table covered in prints and drawings.

“Lisette likes to play on that line between spooky and precious,” says Flores. When the two artists met, they quickly realized they shared an interest in the occult, each trying to one-up the other with the ghost stories they remembered from the border. They were surprised to find that they both had been raised hearing many of the same stories, including one called “El Camaroncito,” or “The Devil at the Disco.”

El Camaroncito is the story of a Friday night—maybe Halloween—at a bar. Maybe it was in the late 70s, says Flores. “There’s this woman, dancing with a man all night,” she says. “He’s so dashing. And then, at one point in the night, she looks down and he has a hoof! Sometimes she faints, or she screams. We all just know he’s the devil. Everyone in the bar gasps and he disappears in a cloud of smoke.”

When they met, “it was right after Trump got elected,” Chavez adds. “And we thought, why do they always make the woman so hysterical in these stories? We’ve been hearing these stories since we were kids—about being ladylike—and we were mad.” Flores says, “We liked the creepiness of it, but also we were agitated by it. It was this cautionary tale – listen to your parents – don’t go out at night… We hated that. There was this wagging of the finger at young women.”

The two decided to collaborate on a revision of the Camaroncito story, and they started working on a video re-telling, in which the devil is played by a woman. Neither artist had worked in video before, and the project quickly included the participation of friends and family members.

“Once we decided the devil would be the woman, we knew she would be really strong, with a kind of vintage vixen vibe, but also… totally intimidating,” Flores says. At an art opening in Austin, they met a woman whose striking looks seemed perfect for the part of the diabla. “I couldn’t stop staring at her,” Chavez says. “She has this grace, this style that was so unique. She just looked strong – like something you don’t want to [mess] with… When she walks into a room, it’s like she makes all the men around her drunk. They are just entranced.” The artists wrote to the woman, Paola Cortinas, who they found through Instagram. They pitched the project to her, and she agreed to be in the film.

The resulting installation, Angel Baby, is a room the viewer enters, bathed in red light, with a bed in the center. A video projection follows the dramatic story of the Camaroncito to its startling conclusion. Shown first at Lady Base Gallery in San Antonio, the work was included in Dean Daderko’s exhibition Right Here Right Now: San Antonio at CAMH in 2018. It was a major moment for the two artists who were collaborating and making video for the first time. Both speak about the collaboration as a pivotal moment in their careers. “We met each other through this project,” Chavez says. “There’s patience to that. It’s really intimate collaborating.”

After our studio visits, we go for ceviche and mariachi at El Bucanero, commiserating over how tired we feel as 2018 comes to an end, sharing stories about how family and friendship affect our creative practices, and talking about upcoming projects and plans. Flores will be in a group exhibition at Clamp Light Gallery in June, and she has a solo exhibition opening in July at the Central Library Art Gallery, where she’ll be making a large floor installation honoring Santa Marta and Philomena Loubana. Chavez is teaching at University of the Incarnate Word. Her next project is a collaboration with Julia Curran, a multi-disciplinary artist from Saint Louis; their project will be shown at Le Shakirail in Paris, alongside Angel Baby.

In a world that doesn’t often value the healing spaces made collaboratively by women, the community knowledge of otherworldly experience, and the inexplicable, we talk about the solace that comes from female friendship and collaborative practice. Both women are thoughtful about the reaction people had to the video. “It’s kind of like unlearning all that good girl stuff and becoming your own person. We needed it. And from the conversations we’ve had, we realized other women needed it, too,” Chavez says. “A lot of people spoke about it being really empowering,” Flores adds. “It was like – hell yeah – we are sharing this story, together.”