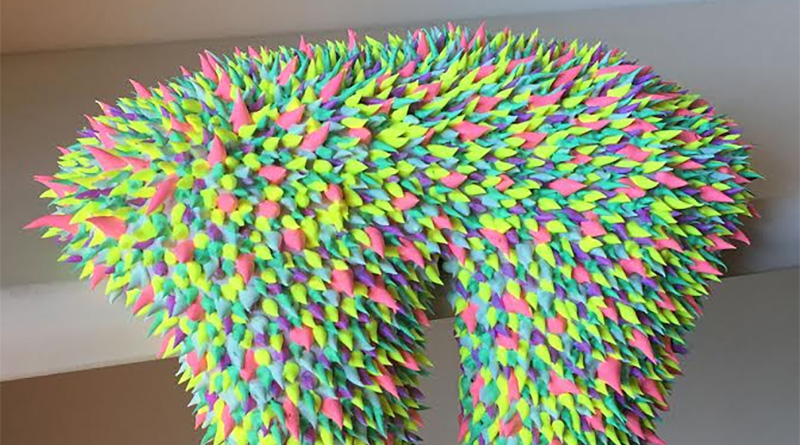 Viewers have many different reactions to Dan Lam’s sublime and potentially grotesque art. The most common response though is a simple question: “What is that?” As strange as her sculptures are, they have a wide audience. Her “drips” turns the heads of art lovers, newcomers, children, and even Miley Cyrus. After using Instagram as a springboard, all eyes were on Lam’s first solo show in Fort Worth last Fall.

“There’s this element of chance with the nature of the stuff I use,” Lam says. She is a control freak who challenges herself by giving up control.

Lam started with drawing and painting and earned degrees for both. But she developed an interest for texture in school. “I started wondering what defines a painting,” she says. “Why is a 2D surface the end all? I started questioning the nature of painting itself.” She experimented with materials no one is teaching painters how to use, like glue and plaster.

Then Lam started using foam that looks fleshy, imitating the softness of skin. It expands unpredictably as it quickly dries. She elevated the surface until it was bulging out of the paintings. Lam poured these works on the floor, but started wondering what else she could do.

More than anything, she is obsessed with her work evolving. Her pieces hung from walls and she wanted to find different ways for her work to interact with environments. Lam liked the thought of it hanging from a shelf. “One day it just clicked for me to pour it off the edge of something,” Lam says. She started exploring the idea and abandoned frames altogether. But Lam still thinks of herself as a painter evolving her visual language.

With the loss of control, Lam is unable to start with a sketch, circumventing direct imagery. She starts with an object, like gloves or other materials left over from making other pieces. Sometimes she extracts materials from a pile of works she doesn’t like. Sitting on the edge of a flat surface or on top of a bucket, the objects are covered with foam and the shape is left to gravity.

“I’m living with them, feeling out the form,” Lam says.

If she likes it, she paints it with bright colors. With acrylic paint, she adds spikes, sometimes using cake-piping tools.

“In my process, my work satisfies two things for me,” Lam says. “There is this very organic chaos part and then this controlled, meticulous detailed obsessive part.”

Her work looks alive, like creatures with spikes on its skin. They seem to move. Paired with loud colors, the results are psychedelic or alien. It looks both organic and synthetic. Perhaps these glorified abstract paintings are sagging flesh.

Things blew up when Lam started the drips a year ago. These sculptures have a mysterious, hyperreal allure. Lam plays with the perception of the materials she uses. Not knowing if they are hard or soft or heavy or light, people want to touch them. Some expect this art to feel slimy.

Instagram played a role in Lam’s success. She was excited when Wayne Coyne from the Flaming Lips started following her. But a few weeks later, Miley Cyrus sent her a direct message. The star bought a piece for an art installation she is putting together in her home. In September, Cyrus posted a picture of Lam’s sculpture to her 58 million Instagram followers. Lam’s drips went viral and she now has over 94,000 followers.

“From just that exchange, a lot of opportunities have come,” Lam says. “Some people bought work from me just because Miley Cyrus has a piece. ”

With national solo shows in the works, Lam seems just as interested in collaboration. She worked with artists including Sergio Garcia, another social media success story, and wants to curate group shows. Collaboration is difficult for Lam, but she thrives on challenges that push her art in different directions.

She is also working on “wearables.” After being contacted by a fashion designer, she is working on headpieces and drips that hang from shoulders. In the early stages of development, Lam is exploring with materials she hasn’t used, like silicone. One can only imagine these creatures on a runway. A jewelry maker also contacted Lam about rings and pendants.

In galleries, Lam wants to make her work more site-specific. “I like the aspect of the viewer experience,” she says. “Thinking forward, I want to create more immersive installations.” These works may appear to be coming out of cracks and holes in the walls. She wants her works to take over a space, putting viewers inside them. Lam likes the idea of something that looks like a comfort item, like a pillow or chair, covered in spikes.

She wants people to wonder what her art is. After starting with paintings, Lam now wants to make drips on a monumental scale, hanging from the rooftops of buildings. She is considering filling her sculptures with neon lights. Lam also likes the idea of making the spikes removable. Viewers could interact with the work by rearranging it. Working with sugary resin, she is even trying to make the sculptures smell sweet.

Lam likes to examine beauty and see what happens when you take it too far. “A cake is beautiful,” Lam says. “But then you have one too many bites and it becomes disgusting.”

Names like “Thigh Gap” suggest physicality. These bodies are decorated with paint and spikes, comparable to a person wearing clothes and makeup. The sculptures explore contrasts, like ugly imperfections and meticulous beauty. The work is disturbing, even if it is shiny and smells sweet. Lam somehow uses relentless experimentation and bizarre imagery to create gleaming tentacles with mass appeal.

“If kids are liking it, I think there is something to it that is true or real,” Lam says. “They give the rawest responses. They don’t have a filter.” Some kids tell her the sculptures are gross. But they still love this art.