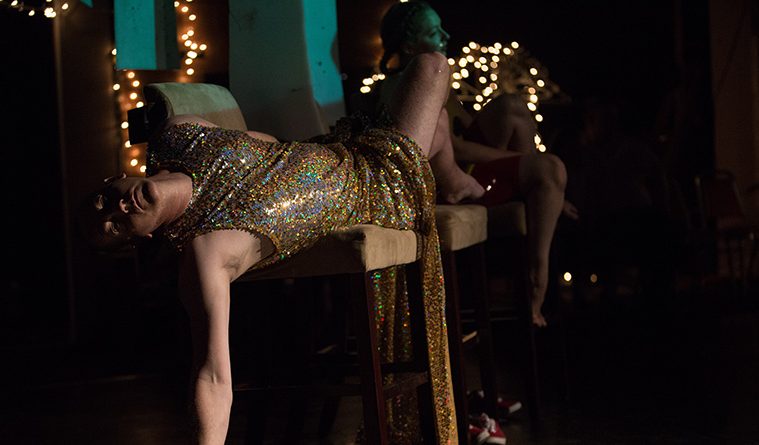 jhon r. Stronks in Once upon a time in the land of green skies, blue grass and red bottom shoes at The Pilot on Navigation April 2017.
Photo by Pam Ashley Photography. 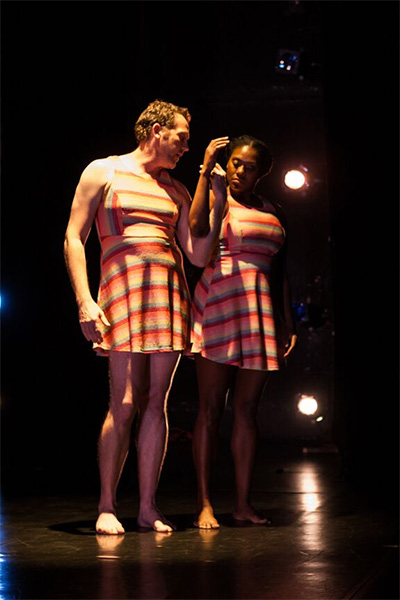 Jonnesha Hawkins-Minter and jhon r. Stronks in Pulling Clouds from the Ground at the Barn, January 2014. Photo by Preetika Rajgariah.

Growing up, jhon r. stronks was never in one place for long. Born in Fresno, his childhood was spent globetrotting to accommodate his stepfather’s occupation as an airline pilot.

In 12 years, he attended 13 different schools from California to Alaska, Washington state to Virginia, D.C. to Florida, and even as far as Australia. Every summer though, he would return to the West Coast to visit his grandfather and aunt.

“I have this sort of duality of having a home that feels like mine and feels very rooted in family and tradition,” he said, “and then I also have this experience of being in a new place every year.”

The fluctuation left him with little certainty about the time and place of his memories, or whether they are truly memories or simply stories that family members have told him over the years. At the age of two, for example, he loved dancing to Tony Orlando and Dawn’s “Say, Has Anybody Seen My Sweet Gypsy Rose,” or so his Aunty Oddball, as she preferred to be called, would say.

It was not until high school that stronks took his first official dance class, but today, he’s one of the most innovative, profound, and for some, mysterious faces in the Houston dance scene – a 44-year-old dancer, choreographer, teacher, singer, and socially conscious artist who lives with his husband Sean, a veterinary technician, and their Siamese cat Angus. Aside from working independently, stronks holds the positions of programs manager at Dance Source Houston and studio manager and jazz instructor at METdance.

“When I’m teaching more so than in my choreography,” stronks said, “there’s a huge Afro-Caribbean influence because I danced with Winifred Harris, who was Cleo Parker Robinson trained.” Even still, his choreography has often been described as “black dance,” a controversial label he said he didn’t fully understand until 2013 when he spoke on a panel in Seattle about portraying race and realism in performance.

“I do not make black dance,” he said, “but my work, depending on how you are looking at it, does have that influence on it because those are the people that raised me.” Bernard Johnson, a former dancer with the New York Negro Ballet, and Michele Simmons, a former member of the Alvin Ailey American Dance Theater, were two of stronks’ greatest influences and the reason he transferred to California State University Long Beach. At the time, he was determined to become the first Fly Guy in In Living Color.

“If it’s something that people are recognizing as black dance, once they see that I am white, I welcome their suspicion,” he said. “I welcome the criticism. I welcome the conversation around cultural appropriation because I do think there is a level of my choreographic work that is based in that. The material and the work and the language that flows through my body is from a culture that is not mine.” 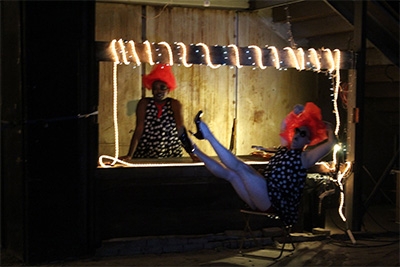 Jhon stronks and Dani Tirell in Sweet T: The Physical Album at the Pilot on Navigation, October 2016. Photo by Brian Buck.

His movement is surprising to some, as is his countertenor voice. Originally, stronks dreamed of becoming a backup singer in Twenty Feet From Stardom. But in junior high, stronks’ desire to participate in choir, the only consistent thing in his life from one school to the next, was tainted when a female classmate refused to sing next to him, calling him a “freak.”

“Prior to that, my voice had always been something that had made me feel safe,” stronks said. “It was a way for me to express my queerness that didn’t necessarily reveal me or put me in danger because it made people smile and it made people happy.” After the incident, however, he began to develop a consciousness around his voice.

He ended up in an opera program at California State University, Fresno, but his fear of juries ultimately led him to change his major to dance and then transfer to Long Beach to be closer to L.A. It was during this time that he developed his “stage name” of sorts. A friend, convinced jhon was the correct spelling according to the Bible, consistently misspelled his legal name, which is John, but through the years, stronks found meaning in the mistake. “It’s the subtle difference between who I am as a person in the world and who I am as a choreographer or an artist or a performer,” he said.

The lack of capitalization, on the other hand, stems from his affinity for American author bell hooks and her belief that one’s work is more important than oneself. stronks uses his choreography as a route to create discomfort in his audience and therefore incite meaningful conversations around difficult situations.

After three years in L.A., stronks moved to Atlanta, where he received a teaching certificate from the Teacher Training Institute and performed with Core Dance, a troupe that is dually based in Houston.

“My first thought of Houston when we landed was, it’s like you take L.A. and Atlanta, and you smash them together and you have Houston,” he said. stronks quickly made connections in the city as a guest teacher, and in 2006, he moved here to direct METdance’s pre-professional company. Since, he has been commissioned by Urban Souls Dance Company, the Houston Black Dance Festival and the Mix Match Dance Festival, to name a few. He has also created the Yay Dance Initiative and Venturing Out, two series presented by jhon r. stronks | “there… in the sunlight,” a company he founded as part of a college thesis project in 1997.

He seems to do anything and everything. In a way, it’s no wonder his friend, dancer Lindsey McGill, referred to him as the most misunderstood man in Houston, a description that eventually led to the birth of what he calls his not-so-alter ego “Miss Understood.”

He had just started to sing again. In fact, he pinpoints the exact moment to when the news broke about Whitney Houston’s death. “I just immediately felt my voice in my throat again,” he said. “Whitney Houston is my Michael Jackson or Prince. She held my golden shadow for a lot of my life. When she passed away, I was shocked at how opened I was by that, and I think part of it has to do with the amount of addiction that is present in my family.”

Shortly after, he created Sparkle Noir, an evening length solo that tells the story of “Miss Understood” and incorporates dress-up, a series of pageant-like sashes and karaoke-style singing. stronks performed this piece at Archway Gallery in 2015 in conjunction with visual artist Donna Perkins, who he’s collaborated with since 2009. He turned to look at one of her abstract paintings, titled Explosive Mix, which depicts him dancing and hangs on his kitchen wall.

The explosion of color and divergent lines in the artwork seem to reflect the different life pathways that he describes to be his choreographic motivation. His primary interest, he explained, lies in pathology. “Even though it seems very specific in Webster’s dictionary that pathology refers to disease,” he said, “I tend to look at it as condition.”

In September, stronks and fellow dancer Dani Tirrell will perform Sweet T: The Physical Album, a duet that explores issues like racial and gender bias, at the Houston Fringe Festival. “Together, we’re just trying to carve out and hold space for difficult conversations and deal with healing,” he said. The Narcissisters, their trio with Nicole McNeil, will also make an appearance, performing Beckoning in the festival’s closing event Anything Goes.

Aside from choreographing and performing, stronks hopes to put more emphasis on teaching again. Regardless, he will continue to impart his movement knowledge to anyone willing to watch, listen, and most importantly, discuss.

“I started dancing in my throat essentially,” he said. “Looking back, there’s a connection between the sensuality of my voice and the sensuality that I wanted to feel and I loved feeling in my body. I feel like the reason why I ended up in dance is because my body wanted it.”