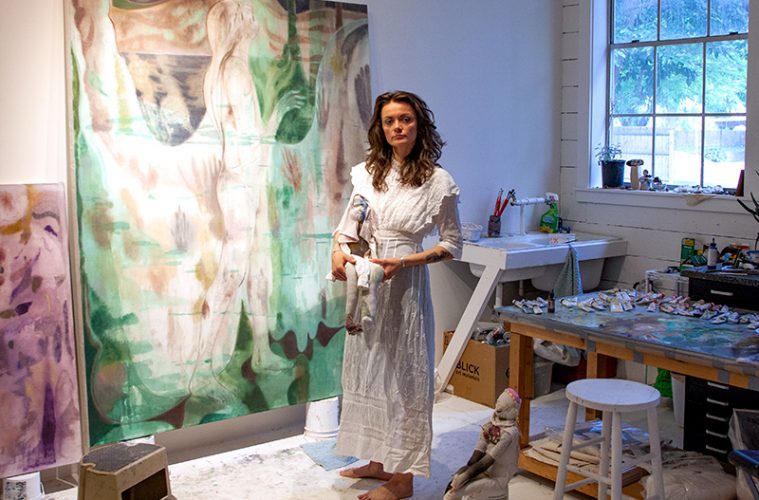 Maja Ruznic in her studio; courtesy of the artist.

Rooted in trauma, identity and the refugee experience, the artistic practice of Bosnia-born painter Maja Ruznic draws on collective memory.

Ruznic’s work borders on the abstract in that the figures as well as the spaces they inhabit possess an unknowable quality, simultaneously appearing and disappearing, existing in a nonlinear time frame that is impossible to pinpoint. These images are born of the dream state. Ruznic has described falling asleep while looking at a blank canvas, waking up not with a clear picture but with an intuitive direction, one that leads her in the use of what has been described as “the drunken hand”, a free flowing painting process that fills in the blanks as her paintings come into being. 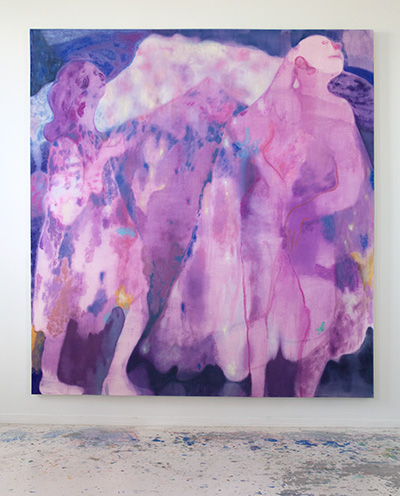 Her own memories of war, childhood, and the almost metaphysical aspects of the human experience also contribute greatly to her haunting works. Using less traditional tools like makeup brushes that leave a bit of the canvas exposed and render a watercolor quality, Ruznic creates pieces like Azmira’s Daughters, and Light Summoners. Both were exhibited at the most recent Dallas Art Fair and are now housed at the Dallas Museum of Art and the US Embassy in Sarajevo, Bosnia and Herzegovina, respectively. These two large-scale paintings are exceptional representatives of the artist’s style, which is not quite abstract, not quite figurative, but pulls from both to create something new and unnamed.

Ruznic’s work around trauma extends to involvement with organizations such as KUMA International, a non-profit based in Bosnia, that Ruznic describes as dealing with art and aesthetics in the aftermath of war, war memories, trauma, and identity, as a lecturer. Dallas visual arts writer Ashley Jones visited with Ruznic about her life and work.

Can you talk about the ghostly appearance of the figures in each painting?

I allow my figures to emerge from stains. Being unplanned, I hope, will let them feel as though they are still being formed even when the painting is ‘completed’. 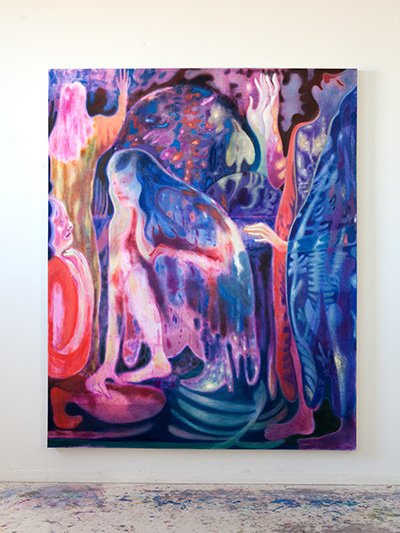 How does your Bosnian identity factor into your work?

Before my first return to Bosnia (in 2008), I felt certain of my Bosnian-ness, but during that first return to my homeland, I felt that certainty slipping. I’ve returned four other times since then, and every time, my sense of who I am changes. I prefer to think about my identity that way.

Does the current political climate factor into your work as well?

The political climate [around the world] is getting more and more polarized. People are getting tougher and louder about letting the world know who they are. I find this widening gap between the left and right really scary, so I create work that suggests something in between the poles. The landscape where my figures exist offers new possibilities, possibilities beyond the good/bad, left/right, them/us binary.

You were inspired to work with the Center for Youth Wellness after hearing a podcast featuring Dr. Nadine Burke Harris (a leading figure in the sector of the medical community focused on screening for exposure to adverse childhood experiences, as well as treating and preventing the adverse effects that the “toxic stress” that comes along with them causes), and your work is trauma-informed, generally linked to your own trauma inflicted by escaping the Bosnian War. Would you be painting if you had not had to leave Bosnia and Herzegovina as a child? 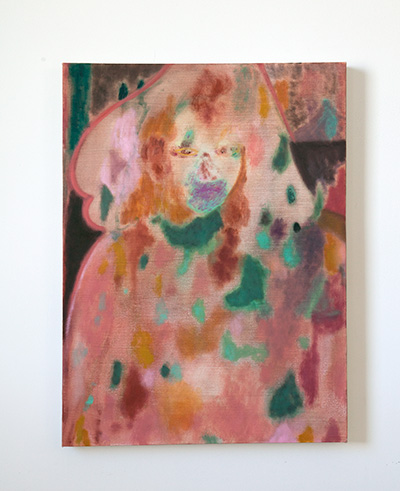 Artist, psychoanalyst, and feminist theorist Bracha Ettinger presents an original theoretical exploration of shared affect and emergent expression, across the thresholds of identity and memory. This is the matrixial realm, a shareable, psychic dimension that underlies the individual unconscious and experience.

Ettinger’s own experience as an Israeli living with the memory of the Holocaust is a deep source of inspiration for her paintings… [Ettinger has said that] unknowingly, we participate in the traumatic events of the other, and art leads us to discover our part in events whose source is not “my”-self.”

You recall your own asylum-seeking experience when you were eight, being rerouted and living in several refugee camps before settling anywhere—there’s such an intense focus on immigration/asylum seeking here and now, does anything feel familiarly transitional?

My mother was a refugee/immigrant woman who brought her two daughters to the US for a better life. Both my sister and I became artists (Alma, my sister, is a singer) which I think is interesting given that art is often looked at as a luxury endeavor, and in our family, it is more of a means for survival.

Have you gotten to hear how audiences connect with and interpret your work? 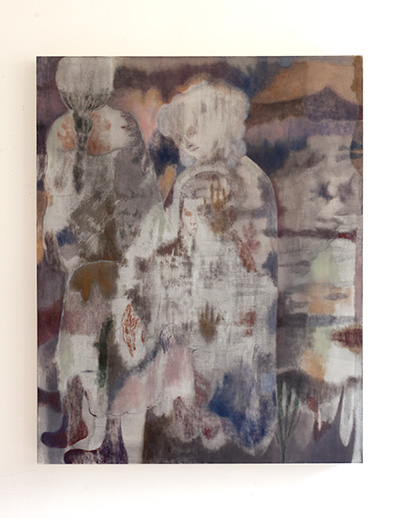 A lot of people have written to me and expressed a deep sadness they feel when in front of my paintings that is not just sadness but also something beautiful. I really like that. People say that they feel dream-like and look like tapestry or old fresco walls where some of the paint is peeling off. Another friend said that my work smells like grandma’s house… All these are really good things! All feel like they/we are all on the right beat together.

What is your goal?

I’m trying to make paintings that evoke feelings rather than tell stories and luckily, this seems to be what my viewers are getting out of them—or at least those viewers who allow themselves to be transported into non-verbal territories.