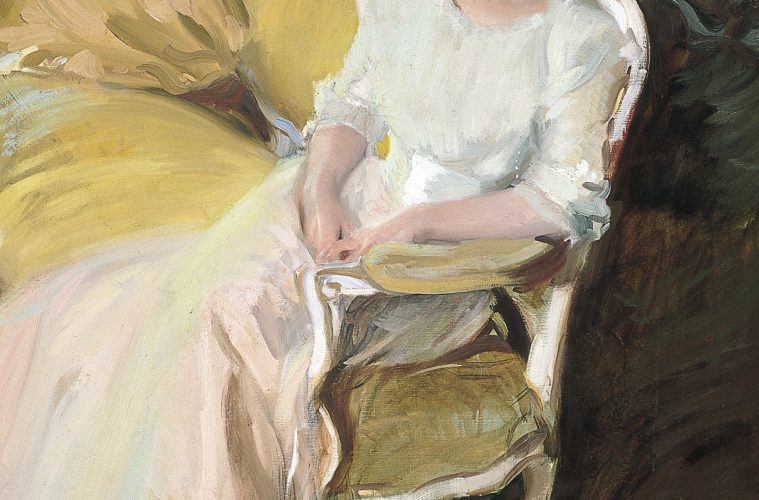 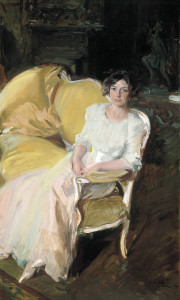 There are a few oil paintings in John Singer Sargent: The Watercolors, which opens Sunday at the Museum of Fine Arts, Houston, but just enough to make connections between his work across media–and, perhaps, to whet your appetite for paintings like the one on the right, which, as it happens, isn’t by Sargent but by his Spanish colleague Joaquín Sorolla y Bastida. Sorolla’s Clotilde Seated on a Sofa (1910), which drew favorable comparisons to Sargent’s portraits around the time it was painted, is on view through April 19 in the Meadows Museum at Southern Methodist University’s Sorolla in America. (Click on the image to enlarge; read my review here.)

The two shows demand to be seen in tandem. Not only were Sargent and Sorolla friends and mutual admirers dubbed “children of Velasquez” by critics, but both exhibitions revolve around each artist’s respective pair of successful New York shows presented at around the same time (1909 and 1911 for Sorolla; 1909 and 1912 for Sargent). Sorolla in America curator Blanca Pons-Sorolla relates in the catalogue that critic H. Monroe, comparing Sorolla to Sargent and their Swedish colleague Anders Zorn, wrote that they were “all miracles of swiftness, dexterity, audacity in style”:

Though only one is a Spaniard, their style is a Spanish inheritance. Probably all three learned more from Velazquez than from any other old master, and more, perhaps, from Goya than from any other nineteenth century painter. They admire the direct vision of Velazquez, his way of painting what he saw instead of what he might have imagined, his delight in paint for its own sake, his dexterity in making a single stroke of the brush suffice for some dramatic climax of color or light.

The qualities that Monroe, who considered Sorolla the greatest of the three, admired show up across genres, themes and media in both Sargent’s and Sorolla’s work, though the unforgiving character of watercolor–not to mention the fact that Sargent himself selected the collections for his 1909 and 1912 shows, which were acquired by the Brooklyn Museum and the Museum of Fine Arts, Boston, respectively–the two museums organized this show to united their holdings for the first time–makes the Sargent show the more consistently dazzling of the two, even as the Sorolla show comes as the greater revelation.

Both shows make note of the special importance their respective artist placed on their paintings on paper–in Sargent’s case, watercolors; in Sorolla’s, mostly oil sketches or gouaches on cardboard or small panels. 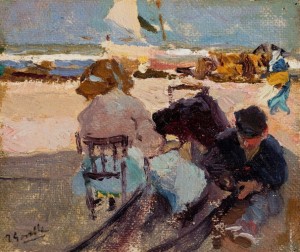 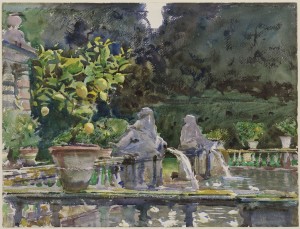 Sargent had to be persuaded to exhibit and sell the watercolors in those two exhibitions; usually he kept them for himself or gave them to friends–including, as it turns out, Sorolla. Meanwhile, Sorolla paid special attention to how he exhibited his oil sketches and “color notes” and gave both Sargent and William Merritt Chase studies for his important 1899 painting Sad Inheritance!.

“These sketches were of more value to artists than to other collectors, as they were seen as containing the genesis of a masterpiece that had won the grand prize at the Exposition Universelle of 1900 in Paris,” writes Sorolla in America catalogue contributor María López Fernández:

In return for his gift, Sargent offered Sorolla a small watercolor of a stable, which today is in the collection of the Museo Sorolla. In the letter announcing that he was sending him the work, Sargent excused himself for having taken so long to send a gift; he had always been painting portraits lately, he stated, and so “I scarcely have any studies or notes for myself.” These few words affirm that the art most appreciated as a gift among artists was the work done by the artist for himself.