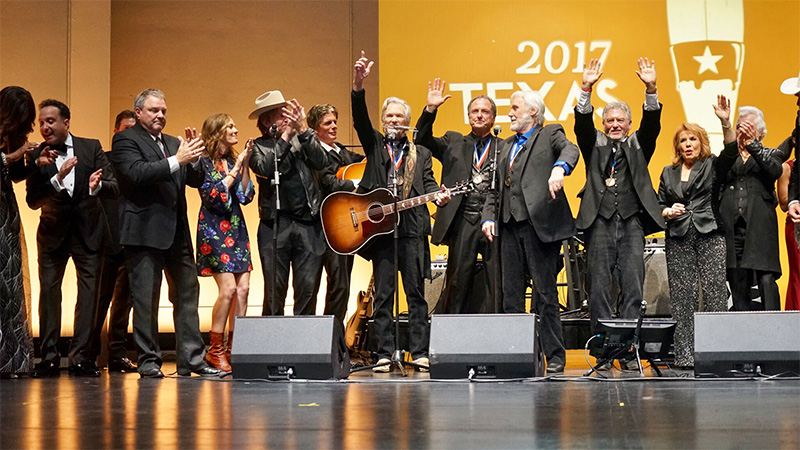 The Arts Matter: The 2017 Texas Medal of Arts Awards

Very few artists create in a cultural or political vacuum, and some of the greatest artists in history have produced work that reflects and confronts the societal issues and struggles of their era. But when artists live in those proverbial cursed, interesting times, well, even celebrations and awards presentations can get political. Such was the case at the 2017 Texas Medal of Arts Awards, when several of the award recipients used their time in the spotlight to not only offer up the usual “thanks for the honor” but to also issue warnings about what happens when a society doesn’t value the arts or embrace freedom of expression.

As the Texas Cultural Trust’s signature event, the Medal of Arts Awards presentation and gala took place at Bass Hall on The University of Texas at Austin campus on Feb. 22. Actress, choreographer, director, producer and 2001 Medal honoree, Debbie Allen hosted the evening. Even while elegantly side-stepping technical sound difficulties with light banter and a twirl, Allen maintained a celebratory tone over the proceedings. With legends like Kris Kristofferson and Kenny Rogers and rising stars Renée Elise Goldsberry, of television and Hamilton fame, and gospel singer Yolanda Adams among those Texans awarded the coveted medal, there was great cause for celebration. Yet the knowledge of how easily the arts can fall into a precarious state due to political indifference or hostility was perhaps not far from the minds of anyone on stage or in the audience.

After a cocktail reception in the Bass Hall lobby, the performances and presentations began with a Texas-themed medley from Grammy-winning choral ensemble Conspirare. Early in the show, Judy Robison, Texas Cultural Trust board chair, spoke about the importance of the arts, not just for arts’ sake but as a $5.5 billion dollar industry in Texas. Perhaps to emphasize the point, the 2017 honorees were first revealed together on stage, posed on couches and chairs with the kind of glamor reminiscent of a Oscar-themed Vanity Fair cover. Throughout the show filled with music and dance, they then were incrementally reintroduced in groups of three, and each allowed time to give thanks and testimonials of what Texas arts has meant to them.

Many times, intermingling with those thanks, were reminders about how vital the arts are to a free society. John Paul Dejoria, who along with his wife, Eloise, was given the medal for corporate arts patron declared that “where the arts go, your culture goes.” Lynn Wyatt, receiving the individual patron medal, proclaimed the arts the soul of any city. Many others honorees gave similar arguments for the arts and the arts in Texas, but a few also used their comments to address directly these interesting times.

Houston Ballet’s Lauren Anderson, the first African-American principal ballerina for a major company in the U.S, said our nation is in a “mess.” Since her retirement from the stage, she’s taken on an educator and outreach role at the Houston Ballet, and working with young dancers has reinforced her belief that “Art it is the glue that continues to keep us together.”

San Antonio native CBS anchor Scott Pelley, on hand to receive the journalism medal, had the strongest comments of the evening and succinctly brought the evening focus into the current news cycle. Pelley began by confessing he had never been more proud to be a “son of Texas,” but soon segued into Donald Trump’s recent declaration calling the media the enemy of the American people.

“Who’s the next enemy?” asked Pelley, “A choreographer, painter, filmmaker, poet, a songwriter? What is the media Mr. Trump speaks of? The media is the conversation of 300 million people who have the right to speak and the right to be heard,” he declared, earning strong applause from the audience.

But of course, the night was filled with more than just talk of art advocacy. The arts were also on full display with sublime performances by Dallas Black Dance Theatre, the medal recipient for arts education, and two Texas Young Masters award winners: mariachi musician and singer Nizhoni Camille Begay and dancer Luke Westerman.

Two of the major highlights of the evening came from honoree for multimedia, Kris Kristofferson. While the actor, songwriter and singer only had a few humble words of thanks when accepting the award, later in the show he treated the exuberant audience to a short solo set including the songs “Sunday Morning Coming Down” and  “For the Good Times,” imbuing each lyric with a kind of sweet-sad wisdom.

At the end of the show, a Texas-star-studded Kenny Rogers tribute band that included Dale Watson, Vikki Carr, Charlie Sexton, Larry Gatlin and the Gatlin Brothers performed some of Rogers’s most beloved standards, like “The Gambler.”

For the final number, with the audience on their feet, the rest of the honorees, including Kristofferson and Rogers himself, joined in for Kristofferson’s classic “Bobby Mcgee.” When audience and artists, joined in song, reached the line “Freedom’s just another word for nothing left to lose” it seemed all the more dense with meaning, and perhaps prophetic of the sheer power of the arts.