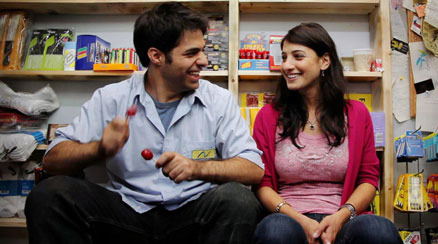 The Best & Only Palestinian Film Fest in the South

According to the Arab American Institute, sickness Harris County has one of the fastest growing Arab-American populations in the country, discount with a healthy dose of Palestinian émigrés and second-generation Palestinian Americans.

Houston also has the second-oldest Palestinian Film Festival — the only one in Texas and the entire South.

“The first Houston Palestinian Film Festival  (HPFF) was in 2007, so this will be our seventh year,” says Sary Joudah, executive director of HPFF. “The only one older in America is Chicago, which just had its 12th anniversary.”

In 2006, Hadeel Assali had attended a programming meeting with Voices Breaking Boundaries, a nonprofit promoting social issues via the arts. Assali suggested a Palestinian film festival like the one in Chicago. Joudah was on the committee that worked on Houston’s first festival in 2007.

He said that the first year he expected about 50 to 100 people to show up. What he got were 300 people at almost all of the screenings.

“And we still get full houses,” says Joudah. “We had films that sold out at the Museum of Fine Arts, Houston’s Brown Auditorium Theater and the Rice Media Center. We’ve even had to schedule additional screenings.”

And the field of Palestinian films gained massive attention last year when the documentary 5 Broken Cameras, a farmer’s chronicle of his nonviolent resistance to the actions of the Israeli army, was nominated for an Oscar.

“We showed it last year, before the nomination was announced, to much acclaim,” says Joudah. “Then other theaters here showed it so it really sparked interest in Palestinian films.

“This is really a Renaissance time for independent cinema in Palestine. There are many filmmakers focusing on thought-provoking indie films using very creative ways. And there are a lot of young directors working now.”

This month the festival will show five films, curated by the HPFF committee. Opening night, May 10, at the Museum of Fine Arts, Houston features When I Saw You, starring Saleh Barki, one of Palestine’s most popular actors.

This 2012 film by award-winning director Annemarie Jacir tells the story of an 11-year-old boy, separated from his father and his homeland, living in the Harir refugee camp in Jordon in 1967. He searches for a way back to his homeland and runs into freedom fighters led by Barki. It is a story of journey and discovery and hope.

“We’re opening with it because it is a beautiful, moving story that gives historic perspective to the Palestinian plight,” says Joudah. “And, back to back with the second film, it sends a very powerful message.”

When I Saw You by Annemarie Jacir.
Courtesy of Houston Palestine Film Festival.

That film is the feature-length documentary A World Not Ours about the current plight of multi-generational Palestine refugees in Ein el-Helweh, in southern Lebanon. Filmmaker Madhi Fleifel used personal recordings, family archives and historical footage to tell the story of today’s refugees in an intimate and even sometimes humorous way.

The following weekend at Rice is dedicated to the feature films Nation Estate and Habibi and the quirky romantic comedy Detroit Unleaded.

This 2012 version is a remake of Rola Nashef’s 2007 short film about an ambitious Lebanese-American youth forced to abandon his dreams of college to take over the family’s 24-hour gas station after his father is killed in an armed robbery. Even though the premise doesn’t sound like it, this is a truly charming rom-com.

Sami, played by Lebanese-American stage actor E.J. Assi, is now ensconced behind bulletproof glass (“They stay on their side, I stay on mine.”), selling gas, junk food, magazines, off-brand perfumes and Tigers baseball memorabilia.

But when he becomes smitten by Naj, a sophisticated but proper “up-do girl,” who arrives at the gas station to deliver an order of cheap long-distance phone cards from her brother’s cellphone store, he begins to dream of a different life.

On closing night there will be a reception following Detroit Unleaded and director Nashef is scheduled to attend and give an audience talk.

If you’re unfamiliar with the rising wave of Palestinian and Arab-American independent filmmakers the festival is a great place to learn more about this thriving scene.

—MARENE GUSTIN
Marene Gustin is a Houston based writer who can be found at marenegustin.com.