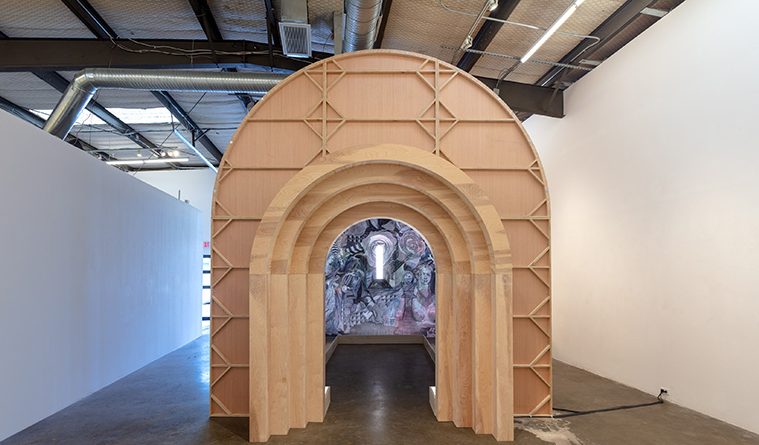 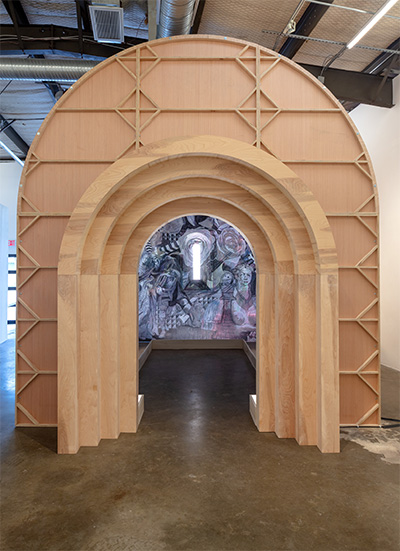 Francisco Moreno’s The Chapel and Accompanying Works at Erin Cluley Gallery, on view through May 19, is a classical barrel-vaulted building constructed inside the gallery.   As the visitor walks into the gallery, the eye settles first on the back wall of the reconstructed building that faces the main entrance of the gallery. The detail of plywood craftsmanship of every joint, the curve of the vaulted roof, and the armature of a vaulted window mimicking the roof of the structure are all left exposed and vulnerable, revealing the careful construction.

Moreno’s building is a Spanish Romanesque Chapel inspired by the Hermitage of La Veracruz, a 12th century chapel originally located in present day Segovia, and transferred to the Prado in 1947. The murals of the original chapel tell the story of the Original Sin in the flat, depthless Romanesque style of the time. In Moreno’s translation, visiting The Chapel is not just about reconstructing a space within a space, but the experience of appropriating an experience. When the visitor walks into the space they are confronted with the back of The Chapel, and are then expected to walk halfway around the space to the dramatic vaulted entryway.

The interior of The Chapel is in direct contrast with the exterior of the space, and every surface of the interior is covered in a large-scale painting with a gradient foundation of color upon which the rest of the imagery is layered. Here, the paintings are as traditionally Baroque as they are conceptually contemporary. In his exploration of imagery, Moreno uses the same vocabulary of Baroque intensity and an immediate departure point from his original Romanesque reference. The layers of color and figure keep the eye bouncing from wall to wall, and trompe l’oeil adds an architectural depth to the space. However, these layers become even more conceptually Baroque as the eye settles in the space and allows the imagery to become clear.

Moreno’s paintings depart dramatically from religious iconography and storytelling in traditional chapels, and tell much of his own personal history through iconography and repeated motifs that reflect on his own Mexican-born, United States-raised upbringing. The images recall pickup trucks, flowers traditional in religious paintings from Mexico, machinery common in fabrication plants where working class immigrants find work in the United States, and Moreno’s dog Puck. This chapel tells a story common to the Mexican-American identity, mixed with the story of a first generation immigrant growing up in the United States. In Moreno’s hands the traditional chapel is reappropriated into a medium not focused on the proliferation of Christianity, but of a semi-religious space that legitimizes the proliferation of a multi-place and multi-ethnic identity. He has converted his Spanish-Romanesque inspiration into an inspired chapel in a secular gallery space and painted in the excess of Baroque ideology to speak on the complex mashup of contemporary identity.

It is also clear that the artist has carefully considered each and every detail of The Chapel. The exterior is masterfully crafted and constructed, however, his balance between highly detailed representational drawings and mark-making show Moreno’s skill as a painter. His technique offers a point of entry for any viewer who is unaware of the specific references, rendering the painting and The Chapel visually impressive.