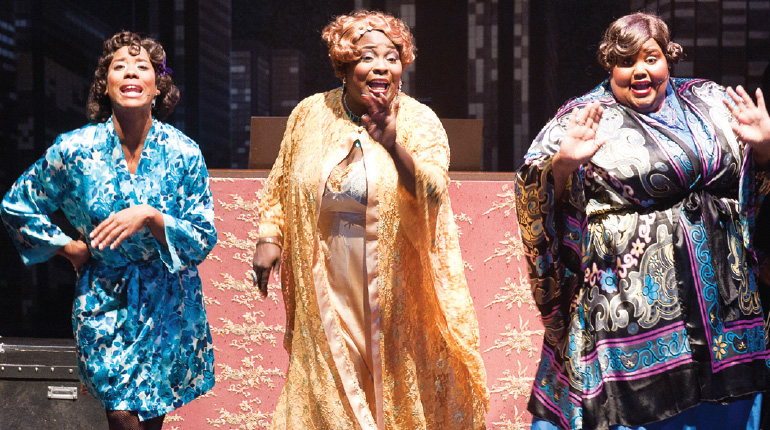 The Ensemble Theatre Embraces its Past and Builds to the Future

February 2–26
“The Ballad of Emmett Till”

THIRTY-FIVE YEARS AGO, GEORGE Hawkins dreamed of a place where African-American actors and artists could practice and perfect their craft. With no physical space available for such an endeavor back in 1976, Hawkins stuffed the trunk of his car with props and costumes and caravanned with other performers around Houston, performing works at schools and community spaces. With unrelenting passion and vision, Hawkins soon moved his burgeoning troupe into a space on Tuam, and later, to a former car dealership on Main.

From those lean years, when Hawkins and his team raided their own closets and attics, looking for anything usable to build sets, turn into costumes or props, the organization has grown into a solid force in Houston’s arts scene. Artistic director Eileen Morris worked with Hawkins as he used his talent and charisma to build the Ensemble, brick by metaphorical and literal brick.

“I am so very excited that we’re celebrating 35 years,” she says. “We have such a proud past and I know we have a bold future, continuing the work of man who invested so much to give African-American artists a place they could call their own.”

It’s not unusual in the arts community for the people who work in theater companies to be dedicated to what they do. But for those at the Ensemble, their work is about much more than putting on high-quality productions. It’s about the preservation and promotion of the African-American voice. And it’s also about connecting with the community. By all accounts, the community realizes the gem it has with the theater in the converted car dealership on Main Street. In addition to serving as a gathering place for groups and meetings, the theater has its own stop on Houston’s METRO light rail line. The Ensemble/ HCC stop anchors a spot on Main that demonstrates Houston cares about its thriving cultural base.

“For some of our audience members, especially the young people who see our shows, this is the first time they’ve seen African-American actors on stage,” says executive director Janette Cosley. “And that is such a powerful thing. It can change perspectives.”

Changing perspective was always part of Hawkins’ original plan. For even as he knew he wanted his company to present contemporary and classic works by black playwrights and performed by black actors, he was fully aware that theater is about telling the stories that connect us.

“At their heart, these aren’t just African- American plays,” explains Morris. “These are stories about family, about conflict, about the human dynamic. These are plays where people can say, ‘that’s my story.’”

This season is arguably one of the Ensemble’s strongest ever in terms of variety of storytelling. On stage now is Ifa Bayeza’s “The Ballad of Emmett Till,” the story of a young black Chicago man who is lynched visiting his relatives in Mississippi during the 1950s. Told with infusions of prose and music, it’s a powerful exploration of one of the most pivotal times in our history. Following that, the Ensemble presents “Cuttin’ Up,” set in a barber shop and told across 60 years of stories and memories.

“It’s a neighborhood story,” says Morris. “And the way it’s written, it can be set in any city, anywhere, so we’ve had the license to put in some local color in terms of names of streets and businesses.”

This season, the Ensemble will also mount August Wilson’s “King Hedley II,” the completion of the playwright’s acclaimed Pittsburgh Cycle, which also includes “Fences,” “The Piano Lesson” and “Seven Guitars.” Set in 1985, it tells the story of a man who wants to make a difference by planting seeds. Following the saga of the characters first introduced in “Seven Guitars,” “King Hedley” is a story of forgiveness and dreams.

The Ensemble has produced nearly all of Wilson’s Pittsburgh Cycle plays, and Morris says that his work always resonates. With the mounting of “King Hedley,” she becomes the only woman to have directed eight of Wilson’s plays.

“That is such an honor for me,” she says. “To show the works of the great August Wilson, that’s just something wonderful and special for us. And, he tells stories that belong to all of us.”

“People come in to see these stories because they are universal,” says Cosley. “And we’re able to tell them in an intimate space, where you feel you’re very much part of what’s happening on stage.”

Allowing the audience to feel that connection is something that is important to both Morris and Cosley. Working to craft a season that showcases established and new works, bringing in actors who’ve been on stage before, as well as extending invitations to new performers are all key elements to the theater’s vibrancy. And it certainly looks as though their hard work on and off stage is paying off. Subscriptions are up at the theater: in 2006, it had around 500 subscribers; now there are 1900. The Ensemble started a young professionals group and has built a core of volunteers who assist with everything from concessions to outreach.

“We have members of the audience who tell us, ‘We’ve been following you since Tuam,’” Morris says. “And it’s so gratifying for us. People want to see good theater and we do our best to provide that, and people want to support that.” Cosley says she’s seeing a great diversity in the Ensemble’s supporters, and she believes it’s because of the diversity of the works presented. “There are so many different perspectives and stories that have been on our stage — and continue to be there as we determine what we’ll present,” she says. “It’s just amazing for me to see it all come together.”

Both Morris and Cosley believe they’ve been entrusted with something special at the Ensemble. They realize that they are carrying on a dream. “George gave us a great gift,” says Morris. “And I am so glad, physically, spiritually and emotionally to be here to help carry that on. George gave us a place that we can call home, where we can connect and cultivate a creative spirit.”

— HOLLY BERETTO Holly Beretto writes about food, travel and the arts for local and regional magazines. You’ll see her at the opera.