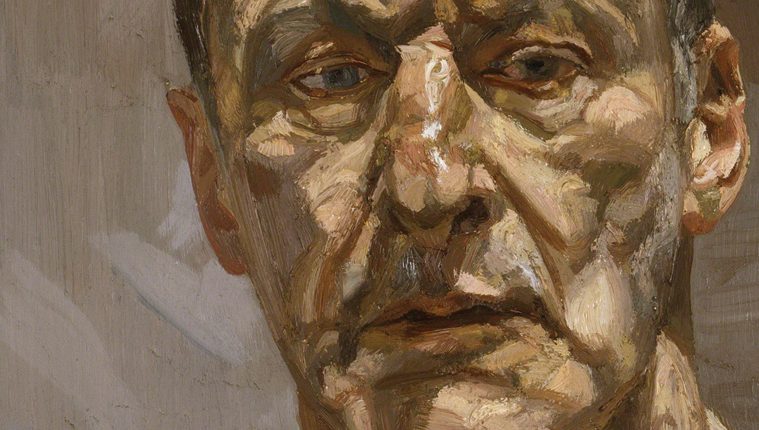 The human figure remains a persuasive vehicle for the expression of fathomless doubt, hard skepticism, and existential uncertainty about the world.

While perhaps something of a straw man argument today, the polemic over the “figurative” and “abstract” in art constituted a pas de deux of ideological counterpoint a century ago. The figurative in art meant accessible, sometimes retrograde representation, while the abstract meant the experimental, avant-garde, and evanescent world in flux.

Artists like Dan Graham, however, broke the pivot by which the figural-abstract dialectic trundled and twirled. Graham published “Figurative” (1968), a photograph of a receipt from studio materials he had purchased, in an issue of the women’s fashion magazine Harper’s Bazaar. It was like an advertisement but it was not: it was a work of art. Further playing out the corporeal aspect of the “figurative,” Graham’s piece appeared by chance between Tampax and Warner’s bra advertisements. Around the same time, fellow conceptualist Mel Bochner translated the human figure into word portraits, rendering, for example, in 1966 the semblances of Robert Smithson in “Repetition,” two disparate columns of words interconnected at certain points by word bridges.

An artist need not abjure the literalism of the figure to reinvent it, as evidenced in the existentially fraught portraits of Viennese modernists Oskar Kokoshcka and Egon Schiele, the British painter Lucian Freud, who is the subject of the retrospective Lucian Freud: Portraits, July 1–October 28, 2012 at the Modern Art Museum of Fort Worth, and contemporary painters Lisa Yuskavage, John Currin, and Richard Phillips. The human figure remains a persuasive vehicle for the expression of fathomless doubt, hard skepticism, and existential uncertainty about the world.

Homing in on the irreducibility of Freud’s portraits, Michael Auping, Chief Curator at the Modern Art Museum of Fort Worth, explains, “I have always felt that there is an oblique post-modern aspect to Freud’s practice. The process involves a cross between performance art and painting.” Auping refers to the active and interactive — or the performative — nature of the sitting, the way Freud’s portrait process was a long affair often unfolding over many days, with the painter getting to know the sitter and vice versa. Describing portraiture in these terms, that is, as a matter of performance and performativity, opens the “figure” to a panoply of possibility, giving it new meaning, uses, ways of rendering, and means of deployment. It’s not quite that it can be anything whatsoever, but the concept and thing called the “figure” indeed has great elasticity and comes in many shapes and sizes, certainly in two, three and possibly four dimensions.

Within contemporary painting, the presence of the human figure is deceptively simple and straightforward. Dallas-based British painter Richard Patterson paints figures — fragments of pornographic imagery, himself, his motorcycle, and an occasional monster truck just for kicks — out of the long tradition of figure painting, which is the deep ballast of portraiture. At the same time, the images of bodies, cars, and architectural spaces in Patterson’s paintings are the stuff of raster graphic manipulation and Photoshop. He creates realities wholly unique to the realm of painting as midwifed — albeit reinvented — by digital photography.  On occasion, he channels the figures of those spaces into actual three-dimensional space, constructing a world of photographs and desideratum as an architectural moment as he did in “Black Narcissus/Ellwood, L-word: Culture Station (Zipper) 1B” (2007). Here, Patterson transmutated the painted figure into a fully present readymade, a motorcycle set within a space that was equal parts giant sculptural socle and a slice of a pristine mid-century modern home.

Fort Worth multimedia artist Tiffany Wolf takes cues from Pictures Generation New York artist Cindy Sherman. Currently showing with Christine Bisetto in the exhibition Crushes at 500X, Wolf plays herself and other in what amounts to a mixture of photographic portrait and self-portrait as a bride mowing the lawn, drinking wine, reading, and playing solitaire. Wolf sets in relief the figure of the bride forever in expectation, like Vladimir and Estragon waiting for Godot. The heart wrenching of the romantic “crush” which one sees in Wolf’s bride is the yin to Bisetto’s yang, the artist’s abstract yet three-dimensional, large crushed paper.  One shows the figure, while the other insinuates it.

The figure makes a similarly suggestive physical presence — at once ghostly, haunting, ironic and absurd — in Dallas sculptor Frances Bagley and Chicago installation artist Jessica Stockholder. Embracing the objecthood of the sculpture-body interface, Bagley claims that the figure catalyzes connections between things and roving people. She explains, “the sculptural form of the figure conveys energy and information relevant to our relationship with the body. Through our own physically there is empathy either consciously or unconsciously with figural sculpture. In addition it occupies the same space that we do with the same sense of presence you feel from another person.” There is a blunt, figural materiality to both Bagley and Stockholder’s work that can be summed up in the word experience.

Like ’60s British and French Op artists Bridget Riley and Victor Vasarely, sculptor-painter Ricardo Paniagua makes pristine three-dimensional geometrical forms, painted in optical patterns — stripes, squares, or undulating waves — suggestive of movement. Upon first blush, these objects might seem simply decorative objects. Their shapes and patterns however place them squarely in the tradition of Op Art, experimental painting and perception, and the kinesthetic event of experiencing them. Paniagua sees the presence of the figure in his work as not literal but implied. “The figure is first and foremost the vessel in which the perception is allowed to relay and transmit energy or thought between people and art. Because of this, the scope of possibility in which the figure manifests remains dauntingly limitless as the human mind is a great, great computing object. The role of the figure is seldom seen from a psychological standpoint rather than literal.” Paniagua’s work only comes to full fruition when one interacts with it: his work is alive in the relational matrix created by roving percipient and object with kinetic patterns.

As with almost everything about contemporary art, the old rules no longer apply.  One need not worry about cultural wars between abstract and figural painters, especially in a world where it is, simply put, increasingly difficult for artists to survive as professionals.  In terms of identity, process and, dare I say, style, there is a radical sense of atomization and autonomy. Like so many independently whirling dervishes, contemporary artists work each according to their own needs and desires. And the micro-narrative has replaced the meta-narrative. While perhaps bleak it is a world in which anything is possible in art. A figure can be a runner choreographed by Martin Creed to run through the Tate Britain, and it can also be the squeezed and swollen face of the Queen Mother evinced through the mottled patches and scumbled surfaces of a small Lucian Freud portrait.