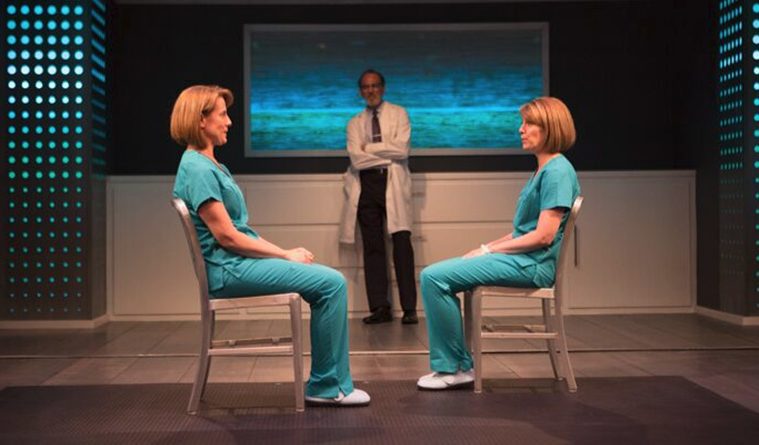 The Future of Memory and Identity: Micky Fisher’s Replica at Stages 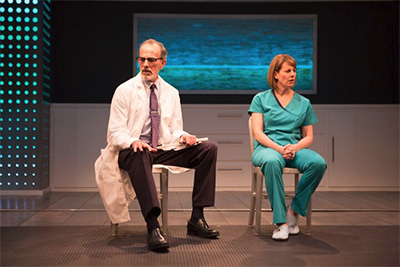 Science fiction has photon-torpedoed and robot-revolted its way into conquering almost every contemporary storytelling medium, with the possible exception of theater. While fantasy settings filled with singing green witches or mopey child wizards have certainly become familiar worlds in live theaters, plays wrestling with what it means to be human within futuristic scientific and technological landscapes are still something of a rare–perhaps genetically-engineered–bird onstage.

So Houston audiences might have found it surprising when Stages Repertory Theatre announced they would world premiere the scifi play Replica (through June 10) towards the end of their 40th anniversary season. At first glance, we might classify this three-character seemingly quiet play by Mickey Fisher as an emotional family drama. But set in a near future and cast with identical twin actors Janna and Julie Cardia, who do not play sisters, Replica turns a mortality play into an unexpected examination of the nature of memory, identity and human connection.

I recently sat down with Fisher during Replica rehearsals to find out why this veteran television science fiction writer, the creator of the 2014 CBS series Extant, starring Halle Berry, and the new NBC series Reverie about virtual reality, and which premieres a week after Replica, would also want to write plays.

The answer proved pretty simple, for Fisher trained as a theater actor, a musical theater actor to be precise, attending University of Cincinnati College-Conservatory of Music as an undergrad. Instructors told him early on that he was destined for character roles, so he shouldn’t expect to work steadily until his 40s. Not wanting to wait 20 years, he began writing scenes and plays for himself.

“By the time I left college, I wanted to be a writer as much as I wanted to be an actor, and gradually I found out I was a much better writer than I was an actor,” Fisher described with a self-deprecating laugh. 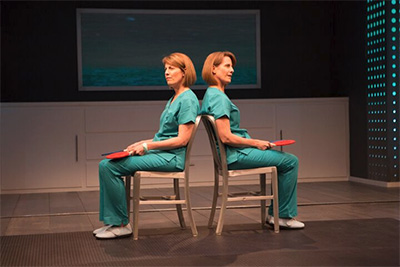 He eventually moved to New York, where he continued to put together his own writing and directing projects. Later, he found his genre voice adapting and directing well-know horror tales for Halloween season shows at the Jenny Wiley Theatre in Kentucky, eventually creating an original mashup show about Dracula in the old west, titled Dracula in Tombstone.

The original germ for his career-making television show Extant began as an idea for the stage, but he realized early on the story would need multi-episodes to tell. Around the same time that his screenwriting was taking off with Extant, a request from his girlfriend, Julie Cardia, inspired him to return to playwriting. She asked him to write her a piece she could use for an acting thesis project and she wanted to work with her sister, who is also a professional actor.

“Why don’t we do something that only identical twins can do,” Fisher decided. “Let’s have one of you play the other’s clone, and that became the jumping off point to write this play.”

Fisher takes it as a compliment that Replica resembles the type of science fiction the Twilight Zone used to present. He loved watching reruns of the classic show as a child and uses it as a kind of model for what science fiction can be on stage. The space battles and alien invasions of summer blockbusters are not scenes any theater company can produce, but they don’t need high-tech special effects to create a good story that happens to fall into the genre of science fiction.

“If we were trying to do laser gun battles, it wouldn’t be as universal as something like this, which questions what it means to be human,“ explained Fisher, adding: “I think science fiction requires you to take a leap of imagination, but you can still write about the things that are important to you, the things that you care about, that you put in the imagined future world.”

With Replica, it becomes apparent that some of the ideas Fisher cares about are questions of identity and self. Does our DNA define us, or our actions, and memories of those actions or is there some other, perhaps spiritual and immortal, thing that makes us who we are?

“It’s stuff that I wrestle with just as a human being, this question of: what am I? There are days that I think that I do have a soul, a supernatural element, and there are other days when I say: that’s crazy. I’m just this collection of stored memory, stored experience. I think it [Replica] is about my own wrestling and reconciling with those questions.” 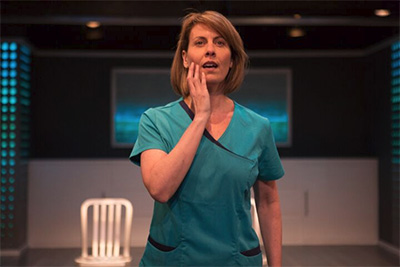 Though Fisher sets the story in a not-so-far-away future and has the plot hinge on a kind of technology we might never achieve, it still speaks to human experiences we easily recognize.

“At the heart of Replica is this question of how far would you go to have another day, hour, minute with the people that you love. What would you be willing to sacrifice for that? How hard would you fight for that?” Fisher asks.

If science fiction can bring a mostly under-explored genre to theater, Fisher also believes theater can bring its own particular thrills and benefits to science fiction, for audiences and the playwright.