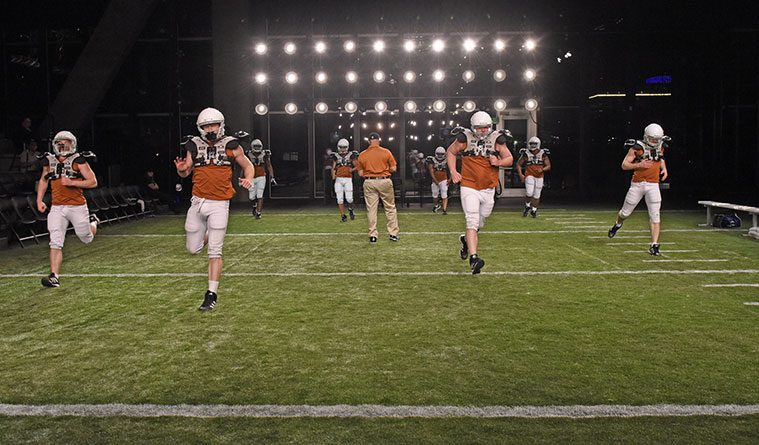 The Glory of the Game: Dallas Theater Center’s Colossal Addresses the Theater of Football 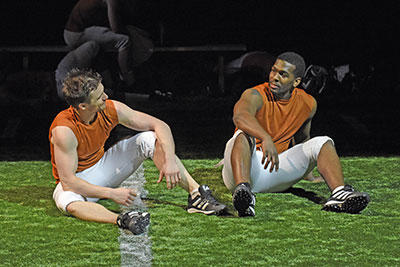 When a mentor challenged Andrew Hinderaker to write “an unproduceable play,” he sought inspiration from what is arguably America’s most theatrical pastime: football.

In Colossal, the main character, Mike, relentlessly watches footage of the collision that ended his promising football career at the University of Texas and put him in a wheelchair. His injury forces confrontations with his unsupportive family, homophobic teammates, and closeted boyfriend, who used to co-captain the team with Mike.

Hinderaker, a Midwest native who earned his MFA in playwriting from UT, also recreated the pageantry of the sport by incorporating a dance team and drum line (for the halftime show, of course) in addition to fully suited-up actors performing the brutal gridiron ballet. “Critics have said Colossal is both the most physically demanding show they’ve ever seen, and a deeply character-driven work,” says Hinderaker. “But it’s a story that’s told with the velocity and violence of football, and the beauty and power of dance.” 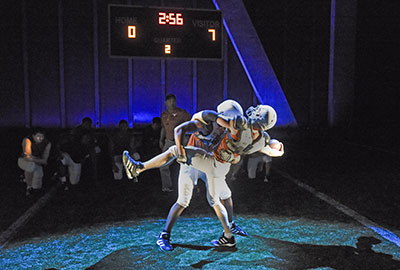 Handling the “dance” part is rising choreographer Joshua L. Peugh, artistic director of Dark Circles Contemporary Dance, who was recently named one of “25 to watch” by Dance Magazine. “Colossal is a really exciting and challenging project,” says Peugh. “I’ve had plans to create a dance for Dark Circles with a drum-line, stadium lights, and football gear for a long time; with Colossal  I also get 11 huge guys and astroturf. It has also been a pleasure to collaborate with Kevin Moriarty and the staff of DTC.”

For all its tough themes and tougher staging, this “unproduceable” play opens at Dallas Theater Center on April 2 and plays through May 3. It’s part of the National New Play Network’s rolling premiere, sandwiched between the Olney Theatre outside Washington, D.C., Mixed Blood Theatre Company in Minneapolis, Company One Theatre in Boston, and Southern Rep in New Orleans. Already it’s the winner of the Jean Kennedy Smith Playwriting Award. 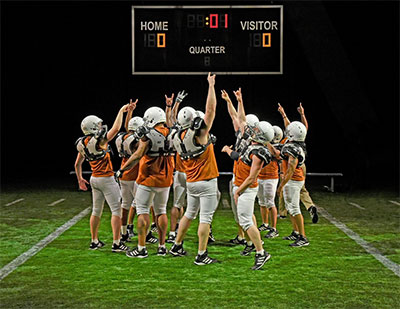 “The first time I walked into the Wyly Theatre, I immediately thought, ‘This is the perfect home for Colossal,'” says Hinderaker. “There are moments when the theater space needs to feel as vast and epic as Darrell K Royal Stadium, and moments when it’s as intimate as a bedroom. The Wyly can accomplish this better than perhaps any theater in the country.”

Having different artistic teams in each of these cities has afforded Hinderaker the opportunity to see his play interpreted in various ways. In Dallas, director Kevin Moriarty and set designer John Coyne are reconfiguring the Wyly in a way that’s never been done before. After all, in a state where football is practically religion, doing things halfway is simply not an option.

And that goes for the cast too. To prepare for the intensely physical staging, the actors trained for up to seven hours a day at 4th & Inches, a facility run by former Dallas Cowboy Noel Scarlett. This kind of rigorous dedication was necessary because, as Hinderaker points out, Texas is “quite simply the epicenter of American football. It is perhaps the only state where football is in the bloodstream at every level.” 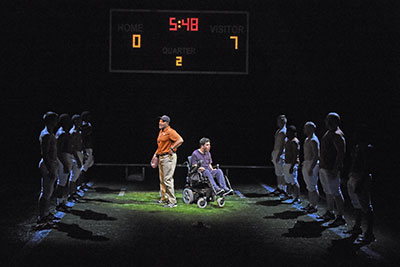 Another challenge was finding the perfect actors to portray Mike at two different stages in his life. Pre-injury, the role demands fierce athleticism and excellent dance skills. Post-injury, Mike must be portrayed by someone who is not only an extraordinary actor, but also uses a wheelchair in real life. “I’ve no desire to perpetuate the extremely problematic practice in our industry of casting able-bodied actors in roles with disability,” explains Hinderaker. “In our production at DTC, I feel incredibly lucky that these roles have been filled by two phenomenal artists: Zack Weinstein (playing Mike) and Alex Stoll (playing Young Mike).”

Producing a play of this scale and scope—from the unique set to the dance rehearsals to the necessary physical therapist visits—is grander than even some Broadway shows, according to Hinderaker. The artistic freedom that Hinderaker says has been afforded to him by Moriaty and DTC is just another glowing example of the company’s commitment to explore different ways of telling stories.

“Oftentimes we assume that theater is constrained, that a space has to look a certain way, that an audience has to sit in a certain configuration, that ‘plays’ are completely different from dance, or magic, or stand-up comedy,” says Hinderaker. “But if we broaden the boundaries of what theater can be, then we can create plays that are as visceral and exciting as sports, and as astonishing as magic.”