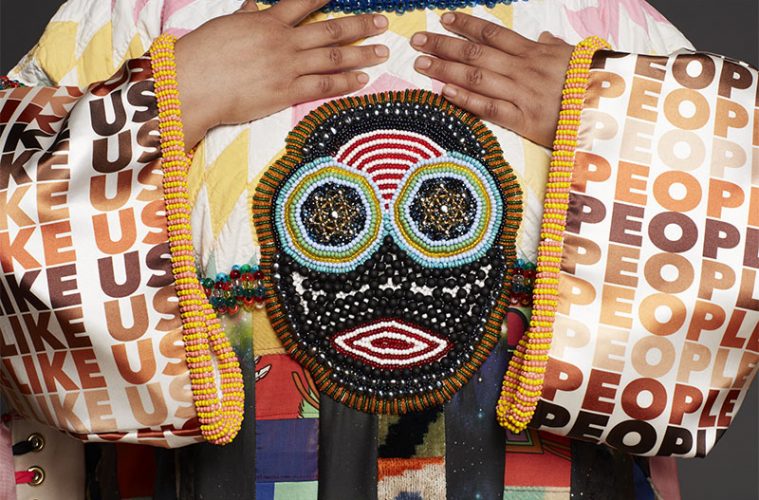 There are many songs that thread through Jeffrey Gibson: This is the Day (on view at Austin’s Blanton Museum of Art, July 14-Sept. 29). The exhibition’s title comes from a New Wave song of the same name by British band The The. “This is the day/your life will surely change,” they sing. Beyonce’s 2012 anthem “I Was Here,” which Gibson takes as the title of a newly commissioned video, calls out to presence and love: “I was here, I lived, I loved / I was here, I did, I’ve done everything that I wanted… The hearts I have touched will be the proof that I leave / That I made a difference and this world will see.”

Both songs thread together a description of the self, in relation to the people we care for. And both suggest a look back on time passing. 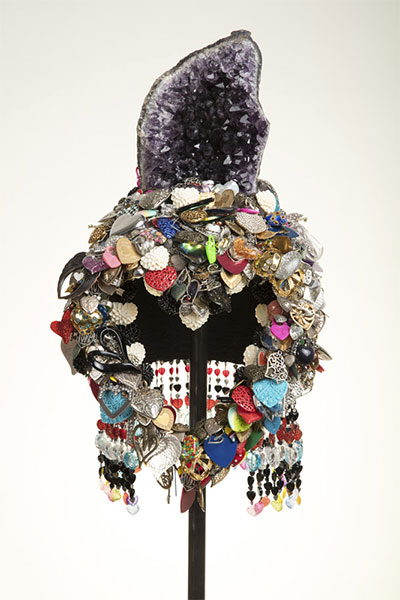 “It has taken a long time for me to think about the element of time being a major subject or component of the work,” Gibson tells me. He describes a job he once had at the Field Museum in Chicago, and how it taught him to understand objects as living things. “There’s an analytical naming of time and artifacts that is most people’s entry point into thinking about history,” he says. But at the Field Museum, considering traditional objects and their previous lives, he began to understand the ways in which things might hold memories. “When objects are living, they are no longer trapped in this singular moment.”

Gibson describes past, present, and future as having different cultural significance, different relationships to imagination. “Many people described as participants in minority culture are always talked about as tertiary,” he says. “That is very stagnating. To really feel present in body and your mind, that was my goal.”

“Once I started feeling more present, that allowed me to acknowledge that there wasn’t a future being presented,” he explains. “The present is really challenging, and in many ways, it denies the future, as it does for many communities in the world. That led me to think about future… the future is just wild.”

Gibson’s family roots reach to the Choctaw and Cherokee communities of Mississippi and Oklahoma. He describes generational strategies of passing, shutting down traditional forms of knowledge to survive. Returning to cultural knowledge now is “like trying to regenerate nerve endings,” he says. And, raised in urban centers away from these communities, Gibson is aware that reaching back to their creative visions might appear disingenuous. “The goal has never been to recreate,” he says. “The goal has been to look at this and think about what the intentions are and what the relationships are, and then you grow from there.” 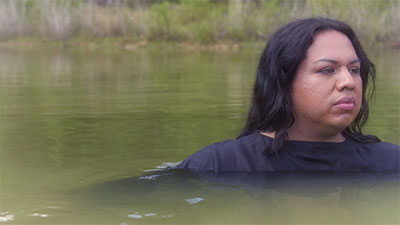 Thinking about objects as animate also tends to raise eyebrows in a more conservative Western object culture. “How do you enter into an analytical, intellectual debate, talking about living objects?” he asks. “It really comes down to faith, which can also be torn apart.” This faith in imagined futures and in living objects, is something of a personal journey. Somehow it resonates with the experience of being in a large crowd at a concert—dancing alone, yet together.

“When I organize shows, I do think about them more along the lines of a concert or an opera, or a really amazing passion show,” he says. “I would combine that with how I listened to DJs in the 90s; you could tell that this hour and a half was curated to bring you in, to hold you, to move you, to let you become anonymous, and then there would be these moments where you could become an individual again.”

Gibson specifically recalls the house DJ scene in Chicago in the 90s as a formative space. “I think in that period of time within the LGBT community, you were leading a congregation for people who were experiencing a need for community,” he says. “The DJing always felt like storytelling. It felt like there was a narrative that you were dancing to. I think about work like that.” 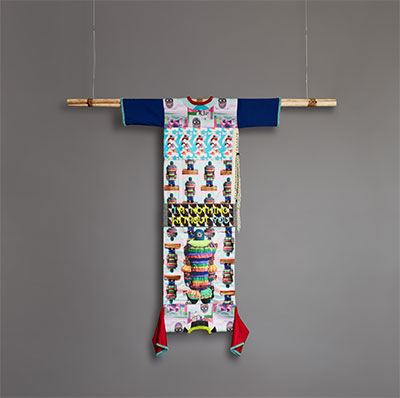 Gibson’s work is finding widespread attention this year: he is included in the 2019 Whitney Biennial, and his solo exhibition Like a Hammer has toured to Mississippi Museum of Art, Denver Art Museum, Madison Museum of Art, and the Seattle Art Museum. This is the Day originated at the Ruth and Elmer Wellin Museum of Art; the Blanton is its second venue.

With so many exhibitions in process, Gibson’s studio practice has necessarily changed. He thinks of the studio as an atelier, much like a fashion designer would organize their working process. “We brought in so many new materials—a lot of sewing, a lot of fabric printing, pattern making, hand embellishment techniques in ways that hover somewhere between sculptural and garment construction and adornment,” he says. “We had to train everybody to do this, we had to do it in process, with looming deadlines. It helped me designate the things that I really have to do, what other people work on. Artistically, it’s really allowed me space to continue experimenting with making in a way that it doesn’t have to lead to a finished object. I can start working on something and then it feeds into the overall practice.”

This is the Day was curated by Tracy Adler at the Wellin Museum; Veronica Roberts is the organizing curator at the Blanton. “Both of them understand the work in a way that it has that sensibility for people, to give people space and private moments,” Gibson says. When Adler first approached him, she invited him to use the exhibition as a space to think about references in his work beyond Native American traditions. “She asked me, ‘does anyone ever talk to you about fashion or about design?’ It allowed us to ask questions about why the processes, materials, and techniques of Native people have never crossed over into popular culture,” Gibson says. “Or, if they have, they haven’t been credited or valued.” 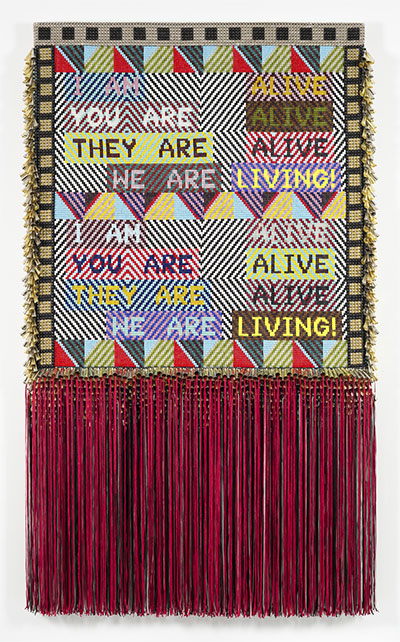 By starting from different vantage points, the exhibition allows a kind of breadth that is liberating. “Tracy was like, ‘you can feel untethered in every way you want to,” Gibson says. As a result, “There’s as much Leigh Bowery here as spirit dance.”

Among the most satisfying experiences this year, Gibson says, is seeing who shows up for the exhibitions. “There are people being spoken to in the work I’ve made who are not used to being addressed. There are people who don’t see themselves in institutions very often. As an adult I realize I was used to being silent, I was used to being invisible, and not being spoken to. In a weird way, it trains your body to have low expectations. There are plenty of people who are impressed by the level of craft, or the formal decisions being made in the work. And there are other people who come in and see something in them that is not spoken to very often. I’ve seen videos of people dancing by themselves in corners of the exhibitions – lots of small instances of people really being touched. That’s been very gratifying.”