The Importance of New Music

PHOTOS: SYZYGY performing at the Meadows School of the Arts at SMU on October 2, 2014.
Photos by Kim Leeson. 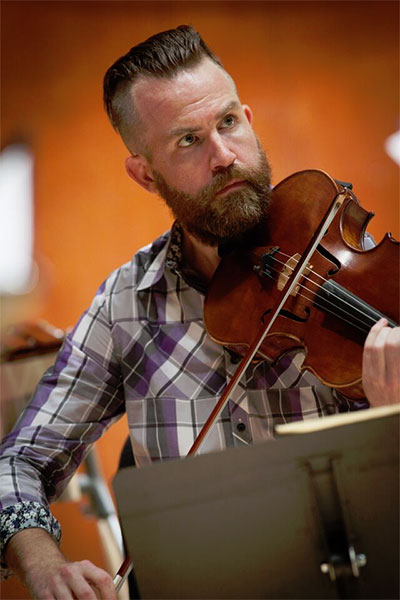 A conversation with SYZYGY’s Matt Albert

What’s the importance of New Music?

And what is “New Music,” anyway?

For our purposes, we’ll solely discuss modern concert music––with “concert” potentially including alternative venues outside the traditional concert hall: museums, warehouses, parks, etc. However, by new music we do not mean twentieth-century musical modernism, that is, twelve-tone music or serialism. Instead, more simply, concert music that is modern “relative to the conditions, perceptions and conventions of our time.”

Again, though, what’s the importance of this New Music–why are we discussing it?

In short, engaging with New Music is a rewarding, intellectually and creatively enriching activity. Like any art form, experiencing New Music is a way to keep in touch with the world and time in which we live, a way to witness the changing, progressing culture and society of today as it happens, and, ultimately, glimpse the exciting possibilities of the future. This isn’t merely an abstract matter of idealism either. Nor is the activity of engaging with New Music strictly a selfish act of entertainment or self-centered stimulation. There are real benefits in attempting to expand one’s mind to understand, to approach, or even just to witness new art. The consequences can be far-reaching and widely felt, and the rewards are both personal and social: growing the boundaries of our collective imagination as our society opens up new ways of learning and thinking in ways not exclusive to music or the arts.

The challenge of engaging with New Music, the effort of trying to accommodate what are often at first strange and confusing ideas, is a necessary component of any flourishing music scene and in North Texas, no one is taking this issue more seriously (and having more fun with it) than Southern Methodist University Meadows’ New Music Ensemble SYZYGY and its director Matt Albert.

Formed in the 2010-11 season as a means of serving the students at Meadows School of the Arts interested in exploring New Music, SYZYGY was founded under the general philosophy that there exists a real need for ensembles that play New Music and a need to emphasize students’ entrepreneurial thinking.

The engine and driving force behind the group is Albert, a violinist/violist who, in addition to helming SYZYGY, is the Director of Chamber Music at Meadows and Concertmaster for the Shreveport Symphony Orchestra. Having worked with numerous artists––both in the popular sector and across the spectrum of western classical music (acts as diverse as Wilco and Meredith Monk)––and having the distinction of numerous decorations (notably three Grammy’s), Albert is in a unique position to guide an ensemble geared towards New Music. 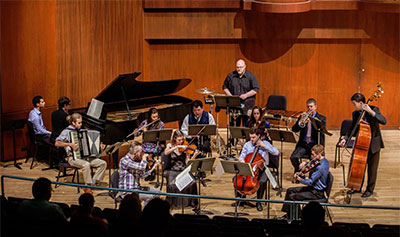 “We need to explore a wide variety of demographics. We should be racially and gender broad, not exclusive to old, white males, whether they’re dead or alive,” Albert acknowledges. And that’s a challenge that as SYZYGY’s director and sole programmer he is more than eager to embrace. “How can I ignore all the rules, how can I perform something that stretches myself, this instrument, the players––I love those questions. I like to subvert those things in any and all ways. I’m not a radical, though, I’m subversive. I like working within a tradition and questioning everything within that tradition, and then subverting from within. I respect what came before, but I like challenging it, too”

The tradition of which Albert speaks is the western classical music tradition. Coming from what is by his own admittance a “traditional western classical conservatory background,” Albert inevitably approaches music from a certain perspective. Certainly, that context comes with its own limitations, restrictions that Albert himself is certainly aware of: “the limitations are defined by the instruments, the halls, and the audience; by the instruments—which are tuned in a certain way; by the halls—which promote listening in a certain way; and by the audiences—which are bound by a tradition and expect a concert to come out of that tradition.”

What started as a means to service the needs of SMU students has now become an entity that benefits the entire Dallas music community. In no uncertain terms, Albert and SYZYGY have become a force to be reckoned with, challenging the oft-stodgy status quo of Dallas classical music in ways unlike any other organization in North Texas.

“My opinion is that the large institutions are doing some great stuff. The DSO sounds really good. The Dallas Opera is doing more new operas. But there does seem to be this whole middle area that’s untapped,” Albert explains. “There’s not as wide a variety of musical events going on in my opinion as there should be. There’s room for local organizations to step up and make some things happen. There doesn’t seem to be a ton of new music happening. The DSO isn’t doing much of it, which is the case with most of the nation’s larger symphonies”

But why is that; why are the big organizations more prone to conservative programming? The truth is that these institutions (locally, entities like the DSO and FWSO) typically lack the risk-to-reward ratio required to make such leaps possible. In some sense, they’re in too many pockets to throw caution to the wind––they simply can’t afford to do so. Yet, maybe there’s a way to both push boundaries and please ticket-buyers?

“When I look at the DSO from the outside it just seems that there are opportunities that are not being utilized—they could have a composer in residence, there could be a new music series. There could be many things. They have the talent and the resources,” Albert believes.

But there are hurdles to overcome. Most prominently, how can directors and presenting organizations help audiences be more welcoming of new sounds?

“Firstly, you can’t pander. You can’t only play what audiences like,” Albert says. “More than anything it’s about connecting and making sure the audience knows that we consider their experience valid, whether that’s positive or negative. It’s about cultivating a dialogue. We don’t want audiences just sitting back and waiting for another version of a beautiful masterpiece. If we don’t challenge the audience and enable them to dialogue with a live performance we’ll eventually lose them.”

Albert continues, “New music programming gets tripped up by accessibility. But in order to expand what is accessible, or what the audience’s conception of accessibility is, you have to go far beyond it. For example, to get someone from Mahler to Schoenberg, maybe you don’t play Schoenberg, you play Ligeti – something that’s really out there – and then you bring them back to Schoenberg. At that point, their ears are open, and Schoenberg feels like home.”

In this way, Albert and SYZYGY are exercising and expanding the limits of Dallas music-making. In their comparatively unusual programming – wherein the works of composers like Pēteris Vasks, Ligeti and Philip Glass rub shoulders – SYZYGY are doing their due diligence to make brave new musical frontiers feel more like home. It’s hard to overstate the value in that enterprise.

Of course, this is just the beginning of the conversation. There’s a lot of room for growth. Each arm of the community–each and every organization, composer, performer and appreciator–needs to up their game, challenge their comfort zones. There are bigger, unspoken conventions at play as well, especially within the relatively discrete parameters of western classical music: things like increasingly dated tunings and instrumentation (the timbres of wood and string) and traditional concert presentation (such as strict delineations between performer, composer and listener) will one day need reevaluating.

But how far is too far, and have SYZYGY gone far enough? The answer, regardless of perspective, will always be a resounding no. No amount of forward-thinking and artistic growth is ever sufficient. It’s never enough. Instead, progress and development in the arts should always remain a geometrical ray, forever searching out the directions of infinity; always and ever tirelessly pushing forward toward an ideal of infinite musical variety.

“It’s about opening as many doors as possible,” Albert confirms. “By stretching for the new, we’re hopefully finding fresh importance in the old. And in doing that, hopefully, we’re making room for this very narrow thing—western classical music––to grow.”

Fortunately for North Texas, in the hands of thinkers like Matt Albert and organizations like SYZYGY, the potential for limitless future musics is always just the next performance away.

(All performances take place at 7:30 PM in Meadows’ Caruth Auditorium)