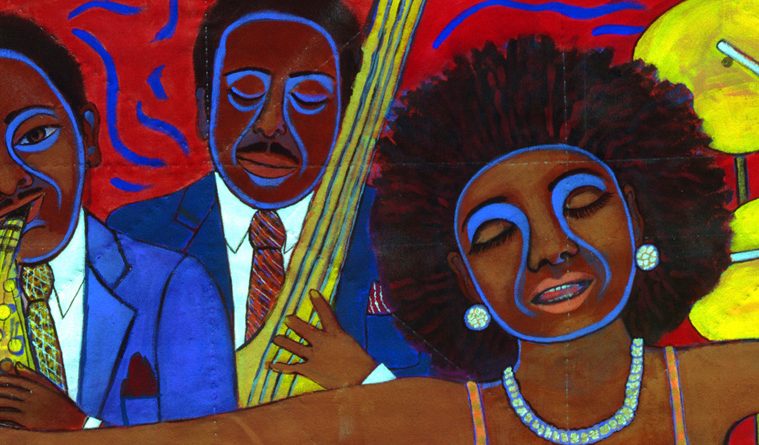 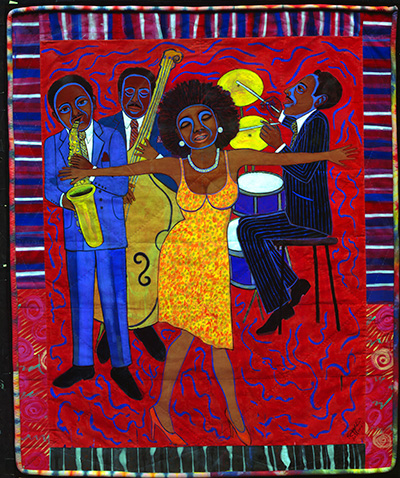 On October 8, Faith Ringgold will be 87. Alive, well, and still making art in her Englewood, New Jersey, studio, she has earned the moniker “living legend.”

For the current exhibition of Ringgold’s work at HMAAC, on view through Sept. 25, three of her famed story quilts, 10 sculptures, three “tankas,” six works on paper, and the illustrations from her most famous children’s book, “Tar Beach,” fill both main galleries of the museum. There is also an excellent documentary, featuring the artist, looping in the theater space downstairs. Ringgold is fascinating as an author, storyteller, speaker, performer, and activist.

The works of art in the downstairs gallery were selected to appeal to children, and the two masks and four small freestanding figures with huge purple Afros and ornate gowns are both mysterious and enticing. The facial features of Dance Mask #4 are distinctive—broad nose, large eyes, and bright red lips—and coated completely with gold glitter. Instead of hair, the mask has long flowing strips of pink, yellow, and blue tie-dyed fabric. Ringgold took trips to West Africa in 1976 and 1977 that influenced her masks, which are not just for display but are worn in performances that combine dancing, storytelling, and music. Nigerian Brocade #2 was obviously made after her trips, as the face is more African and the hair more realistic.

Occupying two walls of the downstairs gallery are the wonderfully imaginative paintings from Ringgold’s first and most famous book, “Tar Beach.” Tar Beach refers to the rooftop of her family’s apartment, where they would gather in the evenings with the neighbors. Ringgold’s family lived in Harlem near the George Washington Bridge, which is omnipresent throughout the book. The second spread shows the young Faith with her beribboned braids and red sash flying across the night sky against the lights of the bridge. “I will always remember when the stars fell down around me and lifted me above the George Washington Bridge,” she writes. The paintings, with their combination of magical realism and childlike execution, reveal Ringgold’s happy childhood, despite references to her father not being able to join the union and her mother “crying when he goes to look for work and doesn’t come home.”

Ringgold’s mother was a fashion designer and her father was a storyteller, and their influence is apparent in her story quilts. The most impressive quilt in the show is The Bitter Nest IV: The Letter. Using paint, fabric, and 14 hand-lettered panels, she tells the story of a young woman named Celia, who traveled to Paris and had a love affair with a man named Victor. Celia had no idea he was married, and after her return home she writes poignant letters to Victor, who never responds. She tells him she is pregnant, later that it was a boy, and finally, that she is giving the child to a family friend named Mavis to raise. Years later, the young man, Percel, discovers the letters and the truth about his parents. The large painting in the center of the quilt depicts him confronting Mavis in an attic overflowing with travel trunks, clothing, and books. He holds the letters in hands, while Mavis tries to explain.

Surrounding the painting are borders of quilted fabric that were inspired by Ringgold’s visit to the Rijksmuseum in Amsterdam in 1972. She began making the story quilts after she saw 14th- and 15th-century Nepali paintings framed with cloth brocade known as tankas. Ringgold’s mother was a talented seamstress and collaborated on her first quilt, Echoes of Harlem, in 1980. According to the artist, she thought the quilts would be an effective way to get people to read her stories. Storytelling has always been an important part of her work, with the quilted borders adding a colorful abstract quality.

Another piece in the show effectively combines a painting with a pieced-fabric border. Part of Ringgold’s Jazz Series, the 2004 Mama Can Sing, Papa Can Blow #1: Somebody Stole My Broken Heart was influenced by the culture of Harlem, where Duke Ellington and Langston Hughes lived around the corner, and her childhood friend was Sonny Rollins. In the painting, an attractive black woman with an Afro and pearls performs with a trio, one of whom is playing the saxophone. The border suggests piano keys, and the red background with its electric wavy blue lines conveys the vibrations of the music. Next to it, in the silkscreen Groovin’ High, Ringgold presents a roomful of couples dancing, the women dressed in colorful prints and the men in dapper jackets and ties. Her flat figures with their lack of modeling are reminiscent of one of her artistic role models, Jacob Lawrence.

Ringgold grew up during the Depression and struggled to become a professional artist. She studied art education at City College of New York because the fine arts program was not open to women. She supported herself by teaching in the public-school system for many years, finally quitting in 1973 to make art full-time. For anyone unfamiliar with her work, the survey at HMAAC is an excellent introduction.