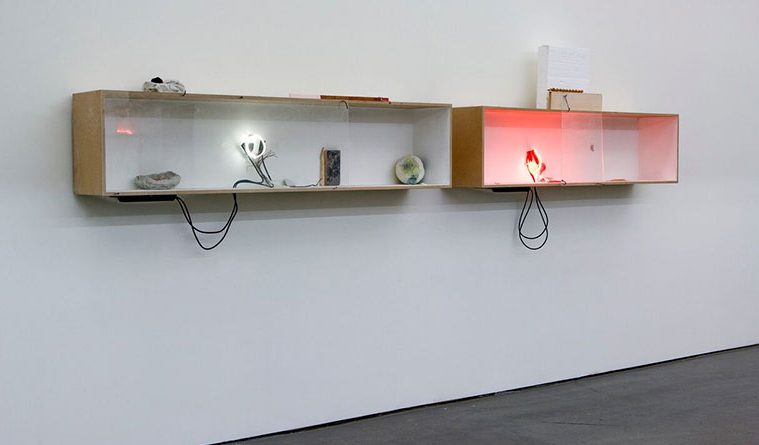 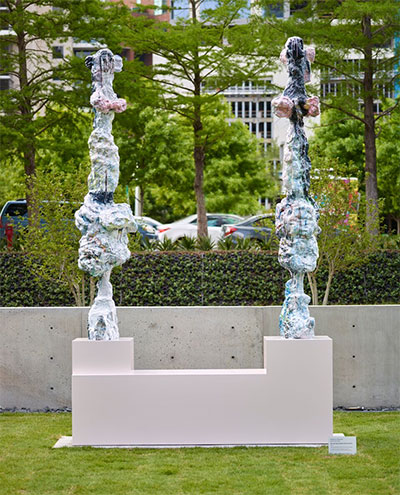 Rebecca Warren at the Dallas Museum of Art

What started as a plan to remodel the north entrance of the Dallas Museum of Art quickly became an opportunity, in the words of curator Gavin Delahunty, “to completely refresh the space in keeping with the idea of a facelift and the belief that a sculpture at the entrance occupies a privileged position.” What is now known as the Eagle Family Plaza had hosted, for decades, Henry Moore’s cast bronze sculpture, Two Piece Reclining Figure No. 3, which greeted visitors as they headed to the parking garage or walked into the museum atrium.  Due to the delicate and painstaking process of de-installing Moore’s sculpture, and a desire to re-think the design, it was decided to commission Britain-based artist Rebecca Warren for a new sculpture for the plaza.

Warren was chosen with care due to the art-historical lineage that connects Henry Moore to Anthony Caro, and Caro to Warren through his close association with her toward the end of his life as a mentor and sponsor of her nomination, and subsequent admission, into the Royal Academy of Arts in 2014.

Warren, who lives and works in the UK, surveyed the site and proposed a two-part sculptural ensemble whose pieces stand over five meters tall.  This new work, in hand-painted bronze, is titled Pas de Deux (Plaza Monument), and clearly represents a body of work that Warren has developed over the last decade as an extension of her personal exploration of the female nude through modeling in clay. 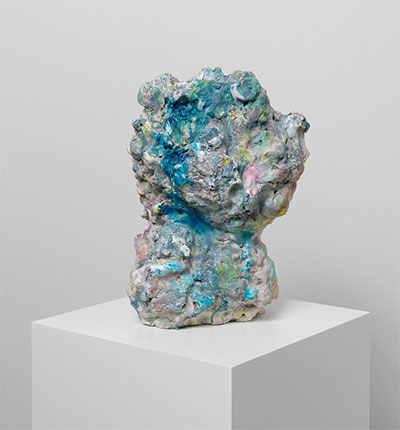 In Delahunty’s words, this sculpture is “one of the first commissioned works by a living female artist to be installed at the entrance of an American Museum” and it is “by far the most ambitious sculpture she has ever made in terms of scale and painted surface.”  Therefore, for a new audience unfamiliar with Warren’s work and in need of context, the museum decided to mount a mid-career retrospective covering the last 12 years of her output.

The impetus for the show Rebecca Warren: The Main Feeling (on view through July 17) came directly out of this unique commission and succeeds in giving the audience a sense of Warren’s innovative practice.  In an arrangement that divides the space into four rooms, more than 20 pieces faithfully illustrate her adept ability to move between materials, evident from the exhibition’s beginning.  In the first room, the curators give the audience a taste of three of the four bodies of work in this retrospective: mixed media assemblages with neon, wires, and found objects; delicate hand modeled sculptures in unfired clay; and cast, hand painted bronze.  Additionally, there are pieces made of welded sheets of bent steel that bring to mind Caro, Richard Serra, and Brian Wall, and seem at first the opposite of her totemic, hand molded and painted bronze pieces in the other spaces, the body of work to which Pas de Deux also belongs.

What runs through all the various styles is Warren’s insistence on underscoring, playfully, the delicate and fragile aspects of her materials as counters to the male titans of the modernist sculptural tradition in the 20th century. 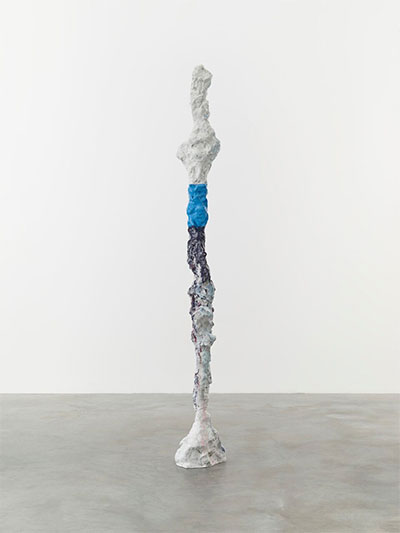 For instance, in the apparently gravity-defying Plato, (2012), Warren plays with mass as relative to perception.  This totemic nine-foot biomorphic sculpture in light blue and fleshy pinks looks precarious even as our minds tell us the bronze is solid. A small thin ankle-like portion above a narrow base holds the massive column on its axis, all the while appearing ready to keel over or snap like a twig.  This tension, constantly at play in all of the work, activates Warren’s critique of narratives of solidity in sculpture, and opens the dialog about material and structures through paired ideas like push-pull, masculine-feminine, top-bottom, and balance-imbalance.

In the steel pieces like Function V, (2009), the viewer sees a solid, yet asymmetrical balancing act that Warren completes with the edition of a frail pompom on the edge of a ramp.  This feminizing gesture becomes such a part of the work that one might imagine that its removal would result in the collapse of the entire structure.  Again, this illustrates the play between the precarious and the sound.  The show presents multiple contrasts from the beginning like the presence of the fragile Styrofoam and pompom held up by a wooden plank in Husband Three, (2005), along with the feminine clay figure in a vitrine titled M, (2005), that stands on one leg as if on the verge of collapse.

Great shows like this one, the fabulous remodel- including the commission, on the heels of the magisterial Pollock exhibition, illustrate that the museum is on a roll and that these are good times.  Hopefully the board of trustees has already begun to ask themselves when to start on the Ross avenue side.