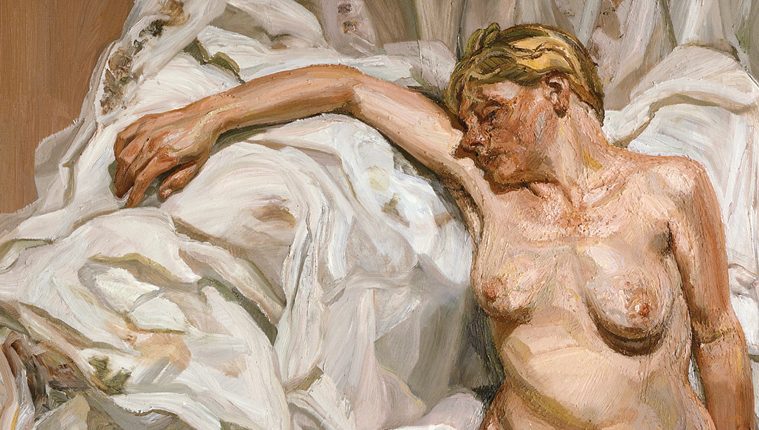 In hailing Lucian Freud as “the Ingres of existentialism” mid-last century, the British art critic Herbert Read hit the descriptive mark with great precision. Read’s naming suggests opposites that have not so much been imperiously forced but organically birthed together. In Freud this meant a thorough punctiliousness cut with an anarchist streak. From the 19th-century French master Ingres he inherited vision and a sense of formal linearity. As for existentialism, he was a man of his time, and all the more so for not painting abstraction. Freud came into his own in the 20th century during the years philosophical existentialism left the fusty towers of academe for the streets of the world. In the mid- 20th century, existentialism had become populist, indeed because of the thunderclap of two world wars and, more precisely, the spread of novels by Camus, Sartre, Gide, Celine and Beckett. The exact origins of the world as a dark open jaw teeming with sharp teeth are slightly earlier, the 1920s, when Freud, grandson of Sigmund Freud, was born in 1922 in the Tiergarten district of Berlin to a middle class German family. Upheaval arrived in the form of deleterious governments, the Weimar Republic followed by the Third Reich, driving the family out of the country to London, where Freud would grow up and learn to identify himself as British above all else.

On view at the Modern Art Museum of Fort Worth July 01–October 28, 2012, the 91 paintings of Lucian Freud: Portraits promise to bring home the viscera of the existential, its embodiment in paint, the portrait, and detailed representation of the skin. One of several offbeat portraits in the exhibition, “Benefits Supervisor Resting” (1994) shows an obese naked woman, sitting on a couch with her head thrown back in a sleepy stupor. The pendulous lobe of her belly relaxes atop her open thighs. Her skin is milky here, reddish there. Existential probing begins in this instance not so much in the figure we see but in us the viewer, where we contemplate the body in which this woman lives, so large, so fleshy, so un-ideal for the late 20th century, and the quiet, oblivious vulnerability of her nakedness on the couch.

Freud was a master of rendering the body and its soft carapace of skin in terms of its psychological itchiness. Freud once said, “What do I ask of a painting? I ask it astonish, seduce, convince…” He painted figures at a time in the twentieth century when abstraction was powerfully on the rise. Abstraction commanded such an ideologically influence in the United States that it — Abstract Expressionism in particular — was taken on as part of the Cold War arsenal. The greater the abstraction, the greater the freedom, or so went the Rockefeller-based credo of “free-enterprise painting.” Though Freud was part of a small coterie of artists in London experimenting with the figure that included Francis Bacon and Frank Auerbach, his work was somewhat anomalous across the pond when it came to the Greenberg-driven meta-narrative of abstraction and the avant-garde. Michael Auping, Chief Curator at the Modern Art Museum of Fort Worth, explains, “I’m not sure Freud fits into a modern narrative, except that every narrative has its standout eccentric that plays by different rules. Although I wouldn’t call him a recluse, he did essentially insulate himself within his own world. Within that world, he created his own narratives. One of those narratives is the house/studio and the people that came into it. He painted people so he could get to know them and be close to them. His life work was essentially a visual biography. These paintings are a life story of wives, lovers, children, other artists. He literally painted them into his life.”

A portrait sitting with Freud might go on for days, even months, and in this time, the painter and sitter would become intimately connected. What viewers see in his paintings thus is a temporal compression of sorts. The brushstrokes that render a sack of flesh, a slouching suit, or legs poking out from underneath the bed: they are the marks of the deliberative time of the portrait making, of the cultivation of a relationship. Freud said, “Getting to know them is part of doing the portrait…a relationship always develops. It can be difficult, as well. I can be very demanding. Not everyone would want to do it.” In 2001 the Queen Mother sat for a portrait by Freud. She was polite and cooperative, but that did not assuage public response to the small painting, which was generally received with disapproval. Freud’s “HM Queen Elizabeth II” is a portrait of the Queen focusing primarily on her face and crown. It is neither entirely flattering nor entirely disparaging. It is honest in the way that Freud’s paintings tell something deep about the sitter by way of their outer surface. It is a matter of revealing their hidden thoughts and beliefs through their integument and subtle disposition. The Queen’s face, slightly pudgy and bloated, fills almost the whole space of the small canvas. Poignantly, as if to say it is improper to be too much “of the people,” she is not smiling. Her lips are pursed.

Connection, what Freud called “a relationship,” is at the core of his portraiture, and it is this personal, fleshy bond that is essential to understanding them. It is what we see and feel when we look at them. Auping says, “Even if the figure is mostly finished and he is working on the background he needs the sitter to be present, visually but also to literally feel their presence in the room. He doesn’t use photographs and he doesn’t make anything up after the sitter leaves the room. To me, this is existentialism in its most immediate and visceral state.”

Lucian Freud: Portraits, July 1–October 28, 2012 at The Modern Art Museum of Fort Worth.