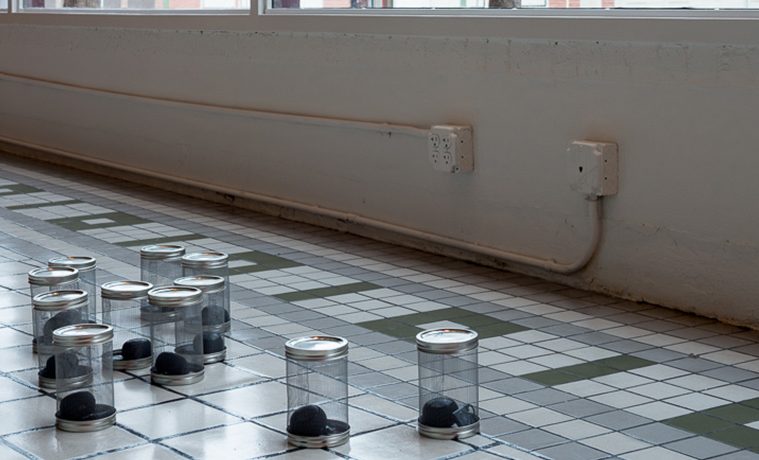 The Noise of the World Is Silence 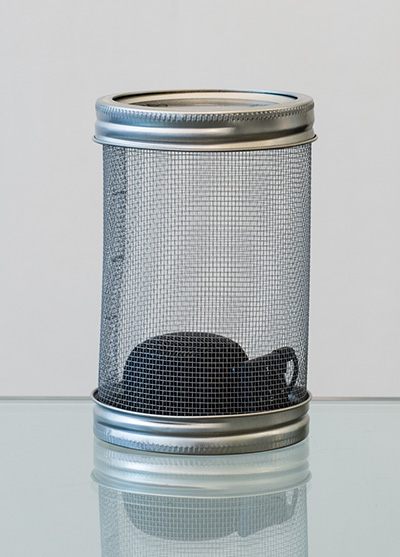 The sound-installation component of Crickets for Solo and Ensemble features small glass bottles reminiscent of specimen jars, each containing tiny amplified speakers that play a solo from Crickets. They were collected during auditions of musicians. Photo by Mark Menjivar courtesy of Artpace San Antonio.

The experience of listening to crickets on a quiet night footnotes one of the premises of Quantum Theory: that by the very act of watching, the observer affects the observed reality. If you approach the cricket too closely, it stops singing.

In the absence of the crickets’ chirping, other sounds fill the silence: Leaves rustled by the breeze, the faint buzz of a distant highway. Silence—as John Cage demonstrated in 4’33”, a 1952 composition that directs musicians to hold their instruments unplayed for its duration—is never absolute.

Mungo Thomson has explored Cage’s obsession with context and expectation for over 15 years in a diverse body of work that includes sculpture, print projects, and—appropriately—many sound installations. His latest work, Crickets for Solo and Ensemble, now on view at Artpace San Antonio, is the most recent variation of a sound work that was first performed at Pacific Standard Time Public Art and Performance Festival in Los Angeles, 2012. It includes video, a sound installation and related prints.

Transcribed from a French record of field recordings of many cricket species taken in Africa, South America, and Europe, Crickets consists of 25 movements—each played to emulate the source recording verbatim. In each movement, percussionists devised special instruments to mimic the crickets’ song. The human players’ presence—enforced by their appearance on screen—is overwhelming. Is this a failed project of naturalism?

I recently spoke with Thomson about his work. Below are selections from our talk.

A+C:  Do you see Crickets fitting into the New Music scene at all—perhaps smuggled in?

Smuggled in. The first track, especially, is not readily identified as crickets, it really sounds like avant-garde music—a bunch of guys going “Reep-Rong! Reep-Rong!” But I never had much interest in the new music scene. It was always intended to be an artwork that just sort of happened to materialize, or manifest, as this thing that could be mistaken for something else—as cartoons, as you-name-it: An avant-garde composition for new music night at the concert hall.

A+C:  It seemed to me that the music shifted, from mimetic moments, to interpretive moments.

There would be one chirp, and we would get as close as we could. But the next day, they might have forgotten how to play it. So it was always drifting. In fact, mimetic and interpretive [art] is exactly what is going on: For instance, that one person playing atmospheric sounds is exactly nailing it, and the soloist is interpreting—or vice versa. At a certain point, you just throw up your hands, and you get what you get. I think there is an acceptance of the impossibility of doing what we set out to do. So then it’s a matter of [deciding] what your standard is.

A+C:  Would you have preferred to have replicated the recorded sounds exactly?

I don’t know how interesting that would be. It would be like photorealist painting—“wow, that’s really great.” Not that I don’t appreciate photorealist painting, but at certain level you have photography to do it just as well or better, so it’s just an act of mimesis, as you say. I’m more interested in approximation. I’m interested the gap—the fact that you know that this is guesswork. 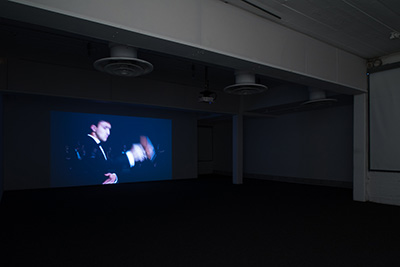 Mungo Thomson. Video from Crickets for Solo and Ensemble.

A+C:  This is a multi-generation production—crickets chirping live, to field recording, to record, to score, to performance, to video. How do the different iterations in the process feel different?

That’s a good question. The score (made in collaboration with composer and sound engineer Michael Webster) just feels like an accomplishment—“Wow, we really managed to do that.” … The performance felt great, because I had never done that—there is energy in the room that you really feed off. I’m more comfortable making video—it’s in my wheelhouse, you might say. I really love it at Artpace; we’re using the existing sound system, with some speakers up front. The video becomes a delivery system for the sound—you can drift.

A+C:  What position does the viewer occupy in your work?

Central. They are the subject. I sort of regard myself as a perceptual artist, phenomenological artist. Reception is the social field of perception. I’m not interested in a zone-out on your own, trippy, perceptual art. Mine is a kind of cerebral perceptual art.

A+C:  In 2006, you made a piece titled Negative Space, a rectangle with a yellow border, with the words “Negative Space” printed on white where we might expect to see the words “National Geographic.” Does negative space exist, or is the figure and ground contrast just a convention of painting?

I think of it as the thing you are not supposed to be looking at. It’s the wrong side of the painting. But for me—it’s back to context; I cannot not-see context. So, I look at that wall, and see the whole wall.

I think it’s true that in a way we have to stop thinking that there is such a thing as silence. It goes back to Cage—the noise of the world is silence. That’s what we have to come to expect is silence—there is no way around. So back to figure and ground: Crickets are a thing that let you know it is silent. If you are hearing them, they are simply calling attention to how quiet it is. And that’s sort of a figure/ground relationship. So maybe it’s not that they stand in for silence, or double silence: It’s that they throw it into relief.