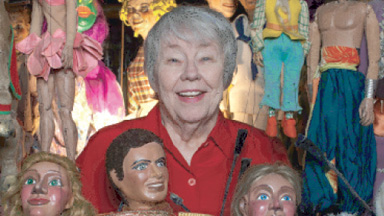 Kathy didn’t choose to go into puppetry. The puppets chose her.

The founder and artistic director of Kathy Burks Theatre of Puppetry Arts, which has been in residence with the Dallas Children’s Theater for more than a decade, was teaching music in DISD and her two children, Becky and Doug, were performing in children’s theaters in Dallas.

Through a friend, she became acquainted with Linnea Lindsley, a Dallas puppet artist and film actor who had purchased a lot of antique puppets from one of the early 20th century’s most famous puppeteers, Sue Hastings.

When it was time for Lindsley to end her run as a puppeteer, the puppets ended up in the care of Burks, who taught herself how to puppeteer — well into her 30s — and has had several successful puppet organizations in Dallas over the past four decades.

This month, Kathy Burks Theatre of Puppetry Arts brings back it popular production of the holiday ballet classic “The Nutcracker” (in which composer Tchaikovsky is a character); and in the spring, the group will present “Young King Arthur.” You can often see their work in DCT’s shows, a mix of rod puppets and marionettes often performed in the Black Theatre style (there’s also Bunraku and show puppets every once in a while).

TheaterJones.com’s Mark Lowry chatted with Burks in her studio at DCT’s home in the Rosewood Center for the Arts, which is filled with puppets having from every possible perch, it seems. Many of the valuable antique puppets, some of which appeared at the opening of Radio City Music Hall or at the Texas Centennial in 1936, are in display cases or packed away for safe keeping.

KATHY BURKS: I bought 1,500 puppets, all marionettes, plus the set pieces, the props, the scripts, and the contracts she had made with people like W.C. Fields.

I’m embarrassed to say because she didn’t get what it was worth. It was in the thousands, but it wasn’t enough. They’re worth quite a bit. But she wanted to sell to me. She knew my kids were into theater and she wanted to pass on the art. I’m hoping my grandchildren will go into it too, but kids want to make money easier than you can this way.

How many puppets do you have now?

How did you learn how to work the puppets?

I started doing birthday parties with my children, after I found a place to put all the things. Eventually I had to rent storage for them. We learned how to entertain that way. I began to do parties for corporations like the Dr Pepper company, then that led to a gig at the State Fair for five years. Then I was invited to opening for stores, and when [the now closed] Olla Podrida opened, we did shows there on weekends. The city kicked us out because we were getting too much of a crowd.

I said “well, you need to build a theater here.” I can’t believe I did all this. I went to Trammell Crow and asked him to convert the two tennis courts [in Olla Podrida] into a theater. I named it the Haymarket Theatre, opened in 1976, and ran for five years. We were the only people doing puppetry professionally in town. We had gotten good. The puppets taught us. We learned how to make marionettes because we had all these marionettes that were beautifully sculpted.

Are most puppeteers self-taught?

Yes. I know quite a few other puppeteers. You get the feeling that the puppeteer is like god, because they do everything. It’s small enough you can put your finger into every aspect of production. It’s wonderful that you can create the whole thing.

How did you end up in residence at the Dallas Children’s Theater?

When I was at the Haymarket, I knew Paul Baker and [his daughter] Robyn [Baker Flatt], not well, but we knew of each other. Paul extended one of his DTC shows at the Haymarket. We had toured our shows, and the DISD closed some of their schools. I got permission to rent [Harry C.] Withers Elementary, and had a child development center there. Robyn needed space to start Dallas Children’s Theater, and I gave her some space there, and she grew from there. We were there together when she began. When they opened the school again we went separate ways. I went to Fairview Farms in Plano and she had opened the Crescent Theater [DCT’s home before its current space at Rosewood]. At Christmas, they didn’t want to do two or three productions, so they asked me to do something for Christmas. When they opened this space, I moved in. It was full circle. I believe in what they do, I’ve done the same thing for years. You’ve got to start them young.

Are adults freaked out by puppets?

Sometimes. That’s a hangover from being young if you were scared by them then. If you’re under three years old, you still are a great believer, and you do believe that the object is alive.

What titles would you like to do that you haven’t done yet?

I want to do “The Legend of Sleepy Hollow.” I would like to do some original shows, we have one called “The Most Unusual Baby” that is just delightful for young kids. There isn’t much puppetry here aimed at adults. I would love to do more adult-oriented puppetry if you could get an audience. Dallas thinks puppetry is just for little kids, and it’s not. But if you want to make a living at it, you have to do it for kids. And that’s important. I think we need to expand into a puppetry center. I don’t want to separate myself from theater because it is theater. That’s why I like to work here because a lot of times Robyn will combine puppetry into a regular production.