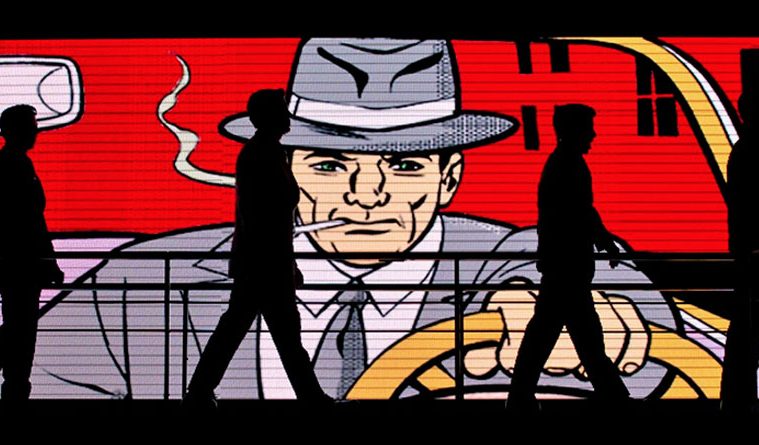 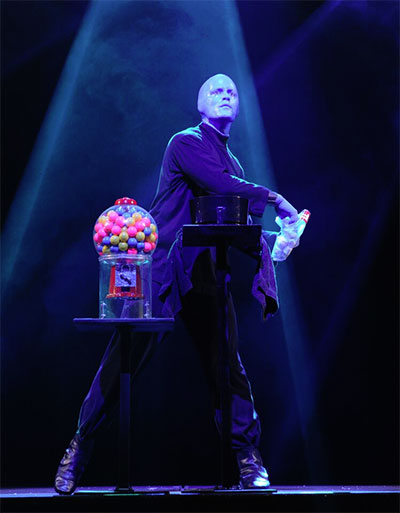 Blue Man Group performs at The Long Center in Austin on Dec. 26-29 and in Houston through Society for the Performing Arts, Jan. 15-17. Photo courtesy of the artists.

This story begins midnight on Halloween when I got a call from a mysterious theater source calling himself Deep Cane. He knew of my reputation as a Christmas show curmudgeon, and said he had the ultimate scoop: proof of a secret anti-holiday show cabal that wanted to reveal their existence to the world. Did I want their story? Indeed I did.

I was blindfolded, thrown into a car and driven for hours before we reached their secret lair, which I now believe might be a sub, sub basement floor underneath Houston Galleria Macy’s or inside a volcano, whichever.

Once inside their home base, which looked surprisingly like my dentist’s waiting room, I finally faced them, the Texas chapter of the Society Against Noble Theatrical Annual Christmas Antagonists’ Never(-ending) Tribulations (SANTA CANT), a.k.a Christmas play villains sick of working every holiday to bring Christmas cheer to audiences through their own humiliation.

While their numbers are vast, that night I met with their democratically elected steering committee, consisting of Ebenezer Scrooge; the shrouded, living skeleton that is the Ghost of Christmas yet to come; the giant Rat King of Nutcracker Ballet fame; and, most unsettling of all, a creature shaped like a snowman but made entirely of coal. I would soon learn that this coalman (“Call me, Cole,” he said) was the anthropomorphic representative of all those threats parents give to naughty children about Santa’s stocking-filling wrath.

As fearful as I was to be in the same room with these renouncers of holiday spirit, after sharing a few drinks with SANTA CANT, I began to find myself sympathizing with their plight and their simple demand: to have one holiday season when theater goers went to some other show and left them alone.

Scrooge, their president, really only wanted to have one blue Christmas to himself, to mourn the loss of his good “friend” Jacob Marley. “The reality of our relationship was not something we could reveal in Victorian London,” he admitted. 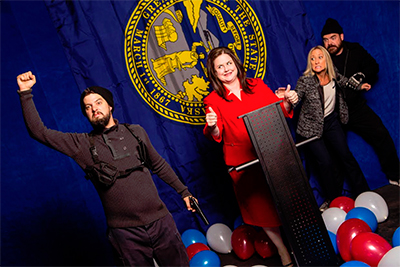 Though his reminisces were surely colored by nostalgia, King Rat made life within the walls of the Stahlbaum manor seem idyllic, as free-citizen rats scurried without care. “Until that imperialist Nutcracker prince invaded with his mercenary toy soldier army and slaughtered us all,” cried King Rat, sobbing into his wine and cheese cubes.

The Ghost of Christmas yet to come, who had recently started yoga classes at his gym, just wanted to spend one Christmas being in the present moment. “I’m really trying to cultivate mindfulness. Always worrying about the Future just leaves these bones anxious,” he explained, while running through some centering sun salutations.

Cole seemed most torn about his place in the Christmas villainy canon. He hated being the embodiment of Santa’s punishment for bad children, but at the same time was ever worrying about being phased out in the name of global warming. “I mean, what the fuck is Santa going to do, leave whoopie cushions in the naughty little fuckers’ stockings to represent wind energy?” I learned quickly that Cole had the dirtiest mouth of the group.

This year, instead of commiserating together, they wanted to make a stand and advocate for new or even non-holiday shows during December. They asked me to deliver their message to Texas, and I agreed. So here are the recommendations from all the theatrically discerning villains of Christmas stories because, really, who knows holiday theater better than them? 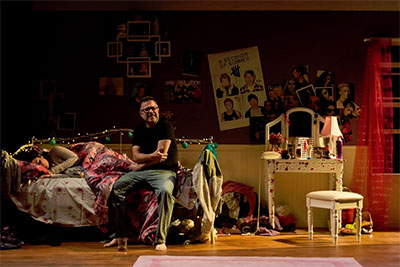 Clarity Welch and Jeff Miller in Houston’s Catastrophic Theatre production of Mark Schultz’s Everything Will Be Different: A Brief History of Helen of Troy.
Photo by Anthony Rathbun.

I would like to get away from Christmas plays completely, so first I’m headed to Catastrophic Theatre in Houston for their production of the Mark Schultz’s comedy about loneliness and alienation Everything Will Be Different: A Brief History of Helen of Troy, through Dec. 5. Catastrophic is my kindred holidays-are-traumatic spirit when it comes to Christmas show.

My next stop will be Clarkston at the Dallas Theater Center Dec. 3-Jan. 31, a world premiere play from MacArthur “Genius” Samuel D. Hunter that looks at the contemporary corporate American West through the eyes of a descendant of explorer William Clark. What might be perfect theater for both alleviating and simmering my Christmas blues is the regional premiere of The Night Alive by Conor McPherson at Undermain Theatre Nov. 18-Dec. 12. The New York production of this tale of four societal outcasts in modern Dublin got raves.

I’m also intrigued by Kitchen Dog Theater’s production of The Totalitarians by Peter Sinn Nachtrieb, Nov. 20-Dec. 19, because sometimes we all need a dark comedy about Nebraska politics so we can laugh our way through the coming year-long election season. 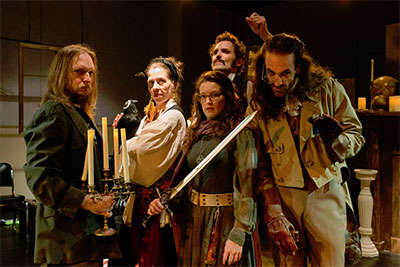 The Ghost of Christmas Past

Admittedly, I’m recommending The Blue Man Group at the Long Center, Austin, Dec. 26-27 and in Houston through Society for the Performing Arts, Jan. 15-17 at Jones Hall, because they remind me of who I could be, if I wasn’t stuck in the future. What a life I could have banging on paint filled drums and eating twinkies all day. I certainly have the skull to be a Blue Man.

I also see the future of theater as interactive collaborative plays, so I have to recommend the always innovative Rude Mechs and one of their more recent works Now Now Oh Now at The Off Center in Austin Dec. 3-19. I can’t wait to see the Rude Mechs’ look into gaming and role playing, and I’ll be there, foreseeing the solutions to all their puzzles.

On Dec. 12, I’ll head over to San Antonio for The Intergalactic Nemesis:Target Earth at the Tobin Center ,because live action graphic novel radio play type shows are also our theatrical destiny. Plus, I really like stories about intrepid reporters fighting aliens. 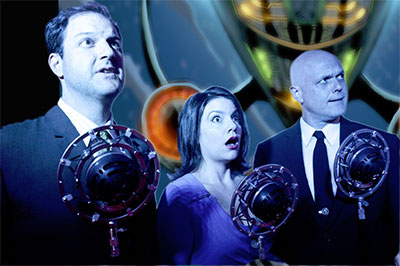 The Austin-based troupe, The Intergalactic Nemesis, performs on Dec. 12 at the Tobin Center in San Antonio and May 12-14 at AT&T Performing Arts Center’s Off Broadway on Flora Series. Photo courtesy of the artists.

As a living coal creature manifestation of parental threats and bribery, I’m favoring the fucked up depressing whimsey that are the fairytales of Hans Christian Andersen. Houston has three Notorious HCA inspired shows to choose from this season.

Both Stages Repertory Theatre and FreneticCore Dance are avoiding any Disney cease and desist orders by going back to the weird, convoluted original Snow Queen story for their productions. Panto Snow Queen: UnFrozen, Dec. 3-Jan. 3, is another of Stages’ original panto productions. Those really are fun for the whole family, with music, silliness and character interactions for the kids and more adult jokes that kids won’t understand for their parents.

FrenetiCore artistic director Rebecca French and guest choreographers Laura Harrell and Heather VonReichbauer use dance to psychoanalyze the Snow Queen, Dec. 4-12, while chronicling the heroic Gerta’s quest to save her friend Kai.

Meanwhile, Theatre Under the Stars naughty little sibling TUTS Underground will be honest with audiences about how warped and depressing Andersen’s Little Match Girl fairytale really is in their production of the modern musical retelling, Striking 12, Dec. 17-23, about a woman selling seasonal affect disorder lights. 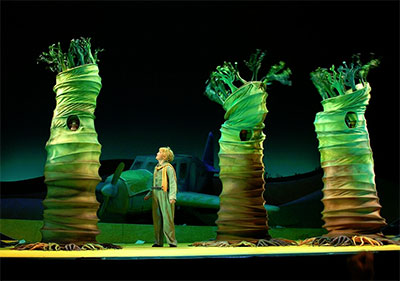 I love all non-Tchaikovsky music, so I’m advising families everywhere go see Houston Grand Opera’s production of The Little Prince Dec. 4-20, based on the book by Antoine de Saint-Exupéry and composed by Rachel Portman with librettist Nicholas Wright. We need more operas about an alien little boys who live on asteroids and console stranded pilots in the desert. I also love operas without an easy villain to boo.

As their number one, rat fan, I’ve seen The Jersey Boys on Broadway twenty times. When they croon into the Winspear Opera House in Dallas, Dec 16-27, I’ll definitely be there. I’d much rather hear the songs and drama of the Four Seasons than listen to one more note of propaganda-filled tunes about the glory of the Kingdom of Sweets.