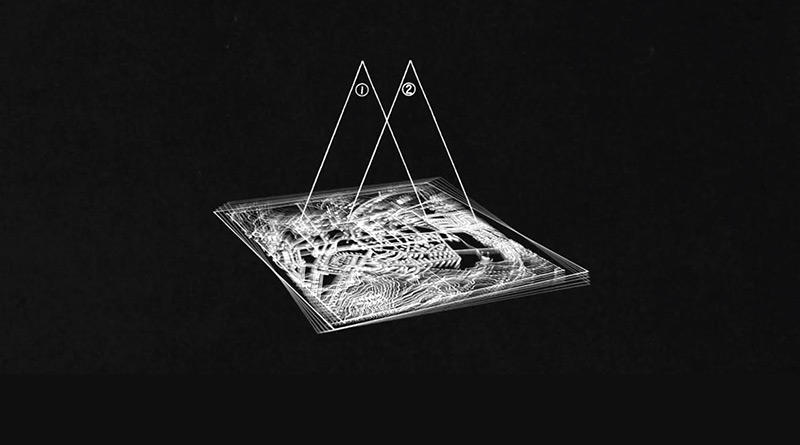 When the lights came up after an hour of Kelly Sears‘ shorts I felt like an extra from The Manchurian Candidate, with a mild case of benign paroxysmal positional vertigo, complete with the eyeball spinning.

“I’m in a trance,” I told Sears afterward. “Oh good,” she beamed, as if that was the intention. And maybe it was. Sears presented an evening of her work on April 1, as part of Archive Fever Dream at Aurora Picture Show.

Up until now, I have only seen her work in small doses. Her work is completely original, sometimes mythic, always subversive. After 60 minutes steeped in her potent visual language, I caught the fever dream.

I’ve been a Sears fan girl since first discovering her dark and dreamy work when she was a Core Fellow at the Glassell School of Art. Her retro stance, cut and collaged found imagery, focus on doom and gloom, obsession with surveillance, subtle wit and restrained playfulness, appeal to my melancholic soul. As a card-carrying baby boomer raised in cold war paranoia, her body of work speaks directly to my native state of dread. She’s got menace down, the unnamed kind, which is rich with post-war creepiness.

Most often in her work, it’s the voice of the narrator (think slightly deranged Frontline guy), that determines the detached tone. Sears offered more insight about her direction to her voice-over actors during the the Q & A, revealing that she suggests subtle changes as the piece progresses. As things unravel, and they do, the voice becomes less reassuring and more sinister.

Her space-centered work, The Drift, proved a highlight of Houston Cinema Arts’ CineSpace: Cinema on the Verge at She Works Flexible this past November. Like many of her short narratives, things start out weird, and get weirder, often entering the absurd followed by the surreal. Drift captures the fear of the great void of space, its enticing allure and the vulnerability of a population listening to something intoxicating. Hard not to think of politics here.

The Rancher, her fantastical portrait of LBJ, takes a similar trajectory, with LBJ de-evolving into a state where he can only utter gibberish. My, this feels timely in this current election cycle, as does Voice on the Line, 2009, where a covert telecommunications operations goes array when people endlessly confess their fears and desires to telephone operators circa 1950. The early version of Facebook, perhaps? Sears mentioned that the Patriot Act was circling in her thoughts while she was making the piece.

Her recent work is more spacious, more haunting, with less people donning 1950s style eye glasses. Narratives are more fragmented, or missing altogether, and the work seems to float more on the surface of consciousness. A tone halfway between lightness and darkness (2015), recently shown as part of Island Time: Galveston Artist Residency — The First Four Years at the CAMH, employs a vibrating gray field with evocative text. She describes it as, “A lyrical investigation of a spirit photographer and his ability to channel the deceased.” Sears cleverly uses a technique of erasure to discuss the erased.

In Pattern for Survival, 2015, the narrator is replaced with choice bits of text that amplify the pulsating rhythm of images. Text from the US Army Survival Manual, such as “Learn to make yourself comfortable in less than ideal situations,” “Anticipate fears,” and “Don’t scratch the affected area,” punctuate the flickering images, some of which include 1970s style gym rats on old school weight machines, and a vintage Cuisinart smashing up vegetables. A high-pitched droning soundtrack comes dangerously close to being unlistenable.

In the Vicinity 2016, finds Sears in her most cryptic and minimalist mood. It may be her most elusive and even expansive piece yet: the effect is trance inducing. She writes in her description, “This film incorporates the spectrum of official, covert, occult and limitless reconnaissance protocols in an instructional guide.” Images of operations with diagrams give us our orders. The text doesn’t appear until near the end. She instructs us to, “Gather intelligence from the future to patrol the present” and “Secure dominance over space and time.” Orders received.